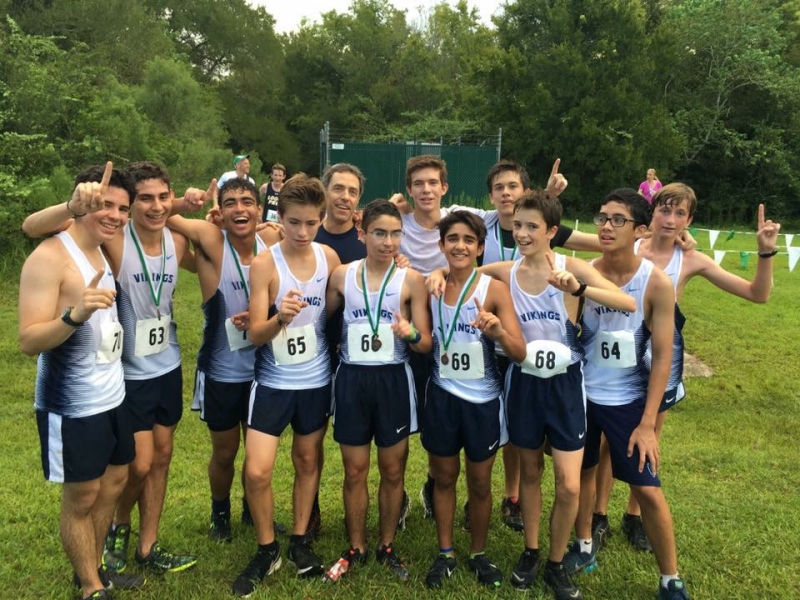 On Saturday, September 10th, the high school Cross Country team competed in the Lutheran South Invitational. It was their second meet of the year, and one that featured a number of teams from varying TAPPS classifications. The boy’s Varsity dominated the race, finishing in first place while capturing 4 of the top 9 spots. Among those finishers was Alex A-E, who came in 1st place overall with a time of 17:06.0. Eduardo G, Kaushal P, and Marco S were also in the top 10 overall. This was a historic achievement as it marked the first Village High School’s first meet win ever. Coach Mastro was incredibly proud of his team and all of the hard work they have put in so far this year. Once it was realized the team had won, Coach Mastro was jumping around yelling, “we’re getting hardware, we’re getting hardware!” Coach Mastro later went on to say, “This was important for me. Not simply because I enjoy winning, but because I know the sacrifices made by the parents, student-athletes, dorm parents, and coaches are large. So I want to take this time to thank everyone for the efforts they have been putting in and to recognize some accomplishments and individual improvements that have occurred in a very short period of time.”

The high school Cross County team is back at it again this weekend as they compete in the 2nd Baptist Soaring Eagle Invitational. The meet starts at 8:00 AM at the 2nd Baptist West Campus. Good luck to all of our runners and keep up the great work!