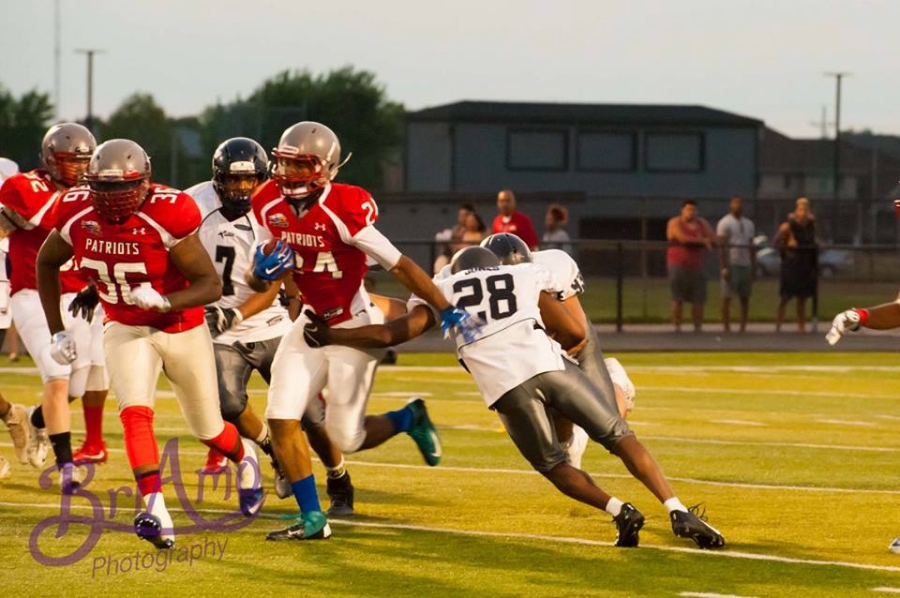 The Lincoln-Way Patriots defeated the Rockton Rush 56-20 on Saturday night June 25th. The Patriots have now outscored their opponents by a total of 79 points in their first two games of the regular season after defeating the Quad City Raiders 62-19 in week one of conference play.

The Patriot offense did not miss a beat, accounting for 494 total yards of offense vs. the Raiders. “ We have been able to have success early in the season offensively because of everyone’s willingness to get to practice. Not only do our guys show up, but they show up to work and it allows us to develop chemistry that we are only going to build on” said Quarterback Tony Powell. The two-time league MVP Powell threw a season high six touchdown passes on 19 of 27 passing and 311 yards.

Running back Calvin Phillips carried the load for the red and white, rushing for 148 yards on 11 carries and two touchdowns. With the Patriots leading 42-20 in the third quarter, Phillips broke lose for an 85-yard touchdown. The offensive line created a nice whole up the middle where he then had nothing but green grass in front of him to help give the Patriots a comfortable 49-20 lead.

2015 Patriot standout Lex Jackson had three receiving touchdowns, including an incredible one-handed touchdown snag in the first quarter to put the Patriots up 14-0. Jackson led the receiving core with 91 receiving yards along with his four catches. After Steve Trudo’s impressive three-touchdown performance last week vs. Quad City, he led the Patriots with five receptions for 52 yards. Javonte Keys, Oojay Wilkerson, and Phillips all had one receiving touchdowns as well.

For the second consecutive game, the Patriots were fundamentally sound on defense. They had five tackles for loss, two interceptions, two sacks, and one forced fumble. Linebacker Greg Barksdale leads the Patriots with 13 tackles through two games, with Tyrell Webster right behind with 12.

Kicker Rafael Alvarado was a perfect eight-for-eight on extra points, and also had three touchbacks on kickoffs. His only punt sailed 54 yards landing inside the 20. Cornerback Chris Muhammad had one interception, and also ran back a punt 30 yards into Thunder territory.

The Patriots (2-0) will have a bye this week and resume action on July 9th at 7:00PM vs. the Chicago Thunder (1-1). The Thunder had a tough loss last week losing to the Quad City Raiders 44-42. “It is always a great game, I expect this to be no different” said Powell.