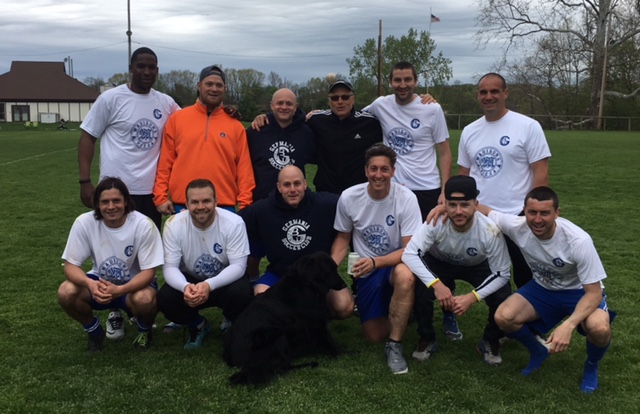 Germania advances 3-1 over defending State Champs Shamrock
Germania advanced this past Sunday to the finals of the O-30 Marth Cup for the first time since back to back titles in 2011-12. The Visitors got on the board first but were quickly answered by Germania’s Conor Lander off a beautiful strike from distance into the upper 90 less than 5 minutes later. An even and entertaining first half saw the teams deadlocked at 1 goal apiece. After the half-time whistle Germania carried most of the play until a counter attack led to a Shamrock penalty. Germania GK Pat Brown however made an outstanding dive to his left and saved a well struck PK from Shamrocks leading scorer. After the huge momentum swing Germania’s Kyle Flynn found the back of the net off a well struck corner from Captain Matt Viggiano. Minutes later Germania would add to their lead off some good build up play that saw Rob Esposito make a tidy finish. The defending champs responded with a mighty push back as the close neared with several corners in the last 10 minutes of play. Germania’s defense proved resolute and the game ended 3-1. Germania will face the winner of NYGA and NY Polet in the final June 4th.
Appearing: Standing Keith Detelj, Connor Lander, Adam Rosen, Keith Fowler, Kyle Flynn, Rob Esposito. KneelingJulian Austin, Pat Brown,, Coach Matt Viggiano, John Palumbo, Will Bussert, Dimitri Markou.
Picture is a courtesy of John Palumbo