hide
hide
No announcements have been posted yet for Frederick Hustlers (13U).

Mother Nature put a quick end to the Frederick Hustlers 2018 summer season on Sunday in Lancaster, PA. Playing in their final event of the summer schedule, the Hustlers were well-positioned for a run at another Elite Baseball tournament championship. The Hustlers defeated MSI National (Garnet Valley, PA) 11-3 and the Tri State Arsenal (Mt. Laurel, NJ) 10-1 on Saturday and entered Sunday’s championship play as the #2 seed. Adam Dellamura got the ball and shutdown the OTP Railsplitters in the top of the first in the quarter final action. The Hustlers scored twice in the bottom half to take a 2-0 lead thanks to a standup triple to right-center by Matt Kulikowski. That’s when Mother Nature decided to take her turn. After a 30-minute downpour, officials had no choice but to cancel the event. “The guys did a great job on Saturday. We were able to save our top arms for Sunday so we were feeling pretty good about our chances. The season effectively ended the way it started….more rain,” noted Coach Main.

After quickly falling behind 3-0 on Saturday morning to MSI, the Hustlers answered with seven runs of their own. “That’s just a sign of maturity with this group. There was a day when they would have hung their heads and panicked,” said Main. Gabe Torres entered in the second and pitched shutout baseball. Ryan Bennett got the final out with the bases loaded in the fifth in a game shortened by the run-rule. The Hustlers recorded seven hits. Tyler Prather led the way with two hits and two RBIs, and Kulikowski doubled and Torres tripled.

The Hustlers got another nice pitching performance from Dustin Isanogle in game two against the Tri-State Arsenal. Isanogle tossed four innings of one-hit baseball with four strikeouts. The Hustlers had ten hits – three by Torres and two by Dellamura. Matt Cunningham had a three-run triple which one hopped the fence in left at Millersville University. “Torres made big strides this season. He was pretty raw when we got him but he could be a middle of the order guy if he keeps working,” said Main.

“This team is getting better and better but we need to add some pieces in order to accomplish what we want to do at places like Perfect Game in Georgia,” noted Main. “Hopefully kids see this and want to be a part of it.”

Colby Patterson celebrated his 15th birthday with three hits and four runs scored and the Hustlers cruised to a 7-2 win over the HCYP Raiders Wednesday evening at Middletown High School. Patterson drew a walk to open the bottom half of the first. Dustin Isanogle followed with a single to left before Matt Kulikowski blasted a two-RBI triple that one bounced the fence in deep left center. Nick DeLisi gave himself up with an RBI groundout to the right side and the Hustlers had a quick 3-0 lead. The Hustlers finished the evening with eleven hits. Patterson and Isanogle each finished with multiple hits. Patterson had a double and a triple, and Matt Cunningham doubled.

The Hustlers are back in action this weekend at Millersville University for Elite Baseball’s Summer Sizzler Tournament. The Hustlers open play Saturday morning at 8:00am against MSI National (Garnet Valley, PA) and play the Tri State Arsenal 14U National (Mt. Laurel, NJ) at 10:20am.

The 14U Frederick Hustlers arrived at the USA Baseball National Training Complex in Cary, NC with a big target on their chest. Having won the prestigious Labor Day Cup event last September, the Hustlers were not about to sneak up on anyone. Facing their best competition of the season, the Hustlers competed admirably and finished a great weekend of baseball with a respectable 2-2 record in the 16-team 14U Cup classic. The two losses – extremely close games - came at the hands of the tournament champion and another team that played in the final four.

The first game was against a very talented Game On Round Trip team out of Savannah, GA. The Hustlers turned to their ace, Matt Cunningham. Cunningham was not sharp on this day and surrendered six runs on eight hits with four walks and a strikeout in four innings of work. The tournament champs scored four runs in the top of the first. The Hustlers got one back in the bottom of the inning on a walk to Colby Patterson and a one out line drive single by Matt Kulikowski. Cunningham then worked a clean, 1-2-3 second before the Hustlers exploded for six runs in the bottom half to take a 7-4 lead. The big blows were RBI singles by Patterson and Brandon Bradshaw. The Round Trip squad got two back in the third and the Hustlers carried a 7-6 lead into the fifth when the wheels came off the cart. Round Trip scored four in the fifth and two more in the sixth on four walks, three hits and two errors. The Hustlers went quietly and dropped game one by a score of 12-7.

The second game of the tournament was against an equally impressive East Coast Clippers ball club that was comprised of players throughout North Carolina. The Hustlers seemingly had this game but ended up letting it get away in extra innings. Down a run entering the seventh, Kyle Sanger drew a leadoff walk. After a strikeout to Patterson, Bradshaw air-mailed the left fielder for an RBI double to tie the game at 5-5. Bradshaw then made the mistake of trying to turn the double into a triple and was thrown out at third base with the heart of the lineup on deck. With two outs and bases loaded in the bottom of the eighth, the Clippers were the recipient of a controversial balk call that ended the game. “Great baseball game. Not sure why any umpire would want to do that but we can only blame ourselves – we had plenty of opportunities and didn’t convert,” commented Coach Main. Tyler Prather pitched five innings and gave up four earned runs with five hits, four walks and two strikeouts. “Tyler didn’t have his best stuff but this was a really good team and he competed his butt off.”

The Hustlers quickly got rid of the bad taste by throttling the Carolina Rebels 12-1 in a night game under the lights. Adam Dellamura was really good and efficient in tossing five innings of one-hit ball with seven strikeouts on 71 pitches. Ryan Bennett closed the game out and only allowed a hit. “I was really proud of the guys in this one. We probably faced the best arm of the tournament and we battled and got him out of the game in the second and ended up taking control,” noted Main. The Hustlers won their Sunday “get away” matchup with the Raleigh-Durham based TPA Nationals by a score of 4-3. Matt Kulikowski pitched four innings of four-hit baseball with seven strikeouts. He surrendered three runs (one earned). Dustin Isanogle pitched the final three scoreless frames and only allowed two hits and had three strikeouts.

With the exception of a couple of players the Hustler bats were mostly quiet over the weekend, and some of that had to do with the quality of arms faced. Kulikowski was 5-12 (.417) with four RBIs. Bradshaw finished 5-13 (.385) with five RBIs, and Isanogle went 3-8 (.375) with three runs scored. 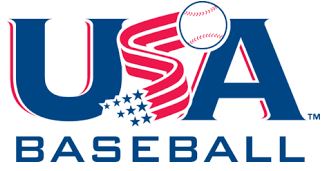 For the better part of the summer, the 14U Frederick Hustlers have been knocking at Championship’s door only to have it unanswered. Most recently, there was a third place finish at Perfect Game’s 22-team North Carolina Super Qualifier and a runner-up finish at Ripken’s Highlight Reel tournament in Aberdeen. Sunday afternoon - with a heat index reaching 104 degrees – the Hustlers drew from those near misses and knocked the door down while capturing the Championship at Elite Baseball’s 14U Summer Blast at Millersville University in Lancaster, PA.

Facing elimination in their semifinal game against a talented Batter’s Box Elite squad out of the Collegeville, PA the Hustlers would not be denied. The two teams had fought to a 5-5 tie in an early seeding game on Saturday morning and the PA team had other ideas on Sunday morning. The usually strong and reliable Nick DeLisi (Good Counsel) started for the Hustlers but simply didn’t have it. DeLisi surrendered three hits, two walks and a hit batter and the Hustlers quickly found themselves in a 4-0 hole after a half inning of play. Facing a tough Batter’s Box arm, the good guys got one back in the bottom half when Colby Patterson (Good Counsel) opened with a sharp single and Matt Kulikowski (Boonsboro) doubled. “That answer, albeit one run was huge,” commented Coach Main. The Hustlers then went to the bullpen for Matt Cunningham (Linganore) and the big right-hander proceeded to strike out the one, two and three hitters in order. Momentum had changed hands. “Matt was so good. His fastball had life and his breaking ball was sharp. He was dealing. The question was whether we could score enough,” noted Main. That answer came right away as the Hustlers scored four runs of their own in the second to take a 5-4 lead. The big blow was a 2 RBI single by DeLisi. The Hustlers added one more in the fifth when Cunningham doubled and Adam Dellamura (Walkersville) singled. Cunningham worked five scoreless innings and only allowed four hits and struck out six. Dellamura threw a scoreless seventh and the Hustlers had escaped with a tough, 6-4 win.

The Championship game was over shortly after it started. The Hustlers were matched up against the #1 seeded OTP (Own The Plate) Railsplitters out of State College, PA. The Railsplitters had outscored their four opponents in the tournament by a margin of 46-10. The Hustlers batted around in the top of the first with a big RBI single by Cunningham and RBI doubles by Tyler Prather (Frederick) and Dalton Williams (Catoctin). The rout was on. DeLisi and Dellamura shared pitching duties and both were effective.

The Hustlers got great pitching throughout the tournament. Dellamura and Dustin Isanogle (Catoctin) each tossed two scoreless innings in an 11-0 win over the Diamond Pros (Baltimore) on Saturday morning. Tyler Prather tossed an abbreviated no-hitter with two strikeouts against the PA Playmakers out of West Chester,PA in the first game on Sunday. Williams and Patterson both threw well in the Saturday game against Batter’s Box Elite.

Isanogle caught all three games on Sunday in the heat. “You wish you had more Dustin’s on the team. He brings so much energy, he loves to play and hates to lose. That’s a pretty good combination,” noted Main.

The Hustlers travel to Cary, NC (USA National Baseball Training Complex) this weekend for the 14U Cup.

The second set of tryout dates are listed below.  Come find out why, year in and year out, players and families are turning to Frederick Hustlers Baseball.  You can register the day of tryouts or pre-register by emailing your son's name and DOB to frederickhustlers04@gmail.com

Tryouts are free and your player only needs to attend one session .  We hope you decide to give us a try.  Please call Wayne Main at 301-401-9034 or email frederickhustlers04@gmail.com with questions. 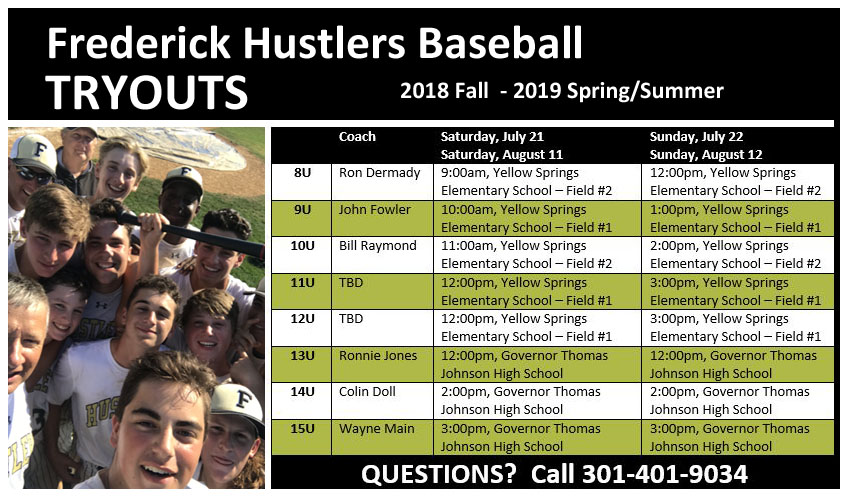