hide
hide
No announcements have been posted yet for Frederick Hustlers (13U).

Coming off a stellar showing at USA Baseball over Labor Day weekend, the 14U Frederick Hustlers turned in a sequel that was equally impressive. The Hustlers jumped two age groups and entered the 16U Sports at the Beach Swing Away Wood Bat tournament in Rehoboth Beach, DE. Facing predominantly sophomore and junior High School players, the Hustlers stood tall with their play and won the hearts of many as they came away with the runner-up trophy in the nine-team event. Pitching to contact and playing nearly flawless defense, the Hustlers utilized timely hitting and some well executed small ball in frustrating their older foes. Saturday morning’s opener against 302 Elite (Georgetown, DE) was classic Hustler baseball. Behind the arms of Nick DeLisi and Marshall Mott, the Hustlers won game one 3-0 with DeLisi starting and tossing three innings of scoreless baseball. DeLisi scattered three hits and a walk with four strikeouts. The lefty Mott then entered in the fourth and threw four innings of two-hit ball. Mott struck out six and walked one. “Those two guys are fun to watch,” commented Coach Main. “They like the big stage and bright lights and I’m happy they are wearing black and gold.” Jake Neff and Matt Kulikowski stepped up offensively and each had two hits; one of Neff’s was a double. Mott, Stephen Betz, Adam Dellamura and Matt Cunningham added one hit a piece.

The Hustlers got all of their bad plays out of their system in a game two loss to the Delaware Rockets. The Hustlers had a 4-1 lead heading into the bottom of the fourth when the wheels came off the cart. Betz, Dellamura and Cunningham shared the pitching duties and did their jobs but in the end, five Hustler miscues spelled a 12-6 setback. Jake Neff again led the way offensively with two hits and three runs including his second double of the day. “This kid is going to be special. He’s a strong kid who has pop and an extra gear,” noted Coach Main. Dellamura, Mott, Kulikowski, Cunningham each had a hit with Mott’s being a two-run double off the wall in left center.

The Hustlers captured the four seed for Championship Sunday and matched up against the five seed Deptford Post 133 Junior Legion team out of Deptford, NJ. The Hustlers were deadlocked at 3-3 going into the bottom of the sixth when they exploded for five runs.  Tyler Prather and Gabe Torres each came up big with run-scoring hits in the second. Torres added a double later in the game. Neff, Mott, Cunningham, DeLisi, Dustin Isanogle and Dalton Williams each had a hit. Mott’s huge two run triple in the right field corner gave the good guys the lead in the sixth. Kulikowski, Prather, Cunningham, Dellamura and Betz all competed on the mound and allowed the Hustlers to escape with a 10-5 win. Dellamura was particularly effective coming in and shutting down a Deptford rally in the sixth with back to back strikeouts.

The semifinal contest matched the Hustlers against the #1 seed SJ Young Guns. Mott tossed four spectacular innings of four hit ball and surrendered only one run with two strikeouts. Neff came in and shut the door pitching the final three frames of hitless baseball. The Hustler defense thwarted three potentially big rallies with inning-ending double plays. Mott gave the Hustlers the early lead in the first with a run scoring single to plate Neff who was HBP and promptly stole second. The Hustlers scored the winning run in the bottom of the fifth behind a bunt single from Williams and a two-run Baltimore Chop single by Neff.

The Championship Game was a rematch of the Hustlers and Delaware Rockets. The game was a pitcher’s duel full of sparkling defensive plays. Sitting scoreless after seven innings, tournament officials turned to the International tiebreaker which places the last three outs of the previous inning on base. The Hustlers plated two runs in the top of the eighth only to watch the Rockets get three in the bottom half for a 3-2 win. “You hate to lose a game that way but hey, we had a great weekend and learned a lot about ourselves,” noted Coach Main. DeLisi was special again tossing four innings of two hit ball. Betz came in and shined as well throwing three scoreless before the tiebreaker eighth. The gritty Kulikowski led the way with two hits and Mott added a single.

Offensively for the tournament, Jake Neff went 6-14 for a .429 clip with eight runs scored.  Mott provided the thunder going 5-15 for .333 with six RBis and three extra base hits. Kulikowski finished at .294 and Cunningham hit .286. Defensively, Cunningham and Dellamura were sensational all weekend in the middle of the diamond.

The Frederick Hustlers simply had too much firepower for the short-handed MD Redbirds on Sunday at the Yellow Springs Baseball Complex. The Hustlers won the opener 9-1 behind the pitching of Stephen Betz, Nick DeLisi and Colby Patterson and completed the sweep with Marshall Mott and Matt Kulikowski tossing an 11-0 shutout. “Our guys are getting better and better. Competition is a wonderful thing and they each know there’s another guy on the bench that’s chomping at the bit to have their number called,” noted Coach Main. Leadoff speedster and newcomer Jake Neff got things rolling in the first when he drove a line drive single to left. Neff scored when Mott launched a two run bomb to right to give the Hustlers a 2-0 lead. The Hustlers added one in the third on back-to-back doubles by Dustin Isanogle and Mott, and scored three more in the fourth when a DeLisi walk was followed up with singles by Tyler Prather and Patterson, and a double by Gabe Torres. The Hustlers finished game one with nine hits – two each by Mott and Prather, and one a piece for Neff, Isanogle, DeLisi, Patterson and Torres.

The Hustlers started quickly in game two, putting seven runs on the board in the first and chasing the Redbird starter. Isanogle singled, Mott walked, DeLisi and Prather singled, Neff walked, Matt Cunningham singled, Torres doubled, Betz walked and Patterson singled. Marshall Mott took the mound and any hope for a Redbird comeback quickly vanished. The Hustlers recorded eleven hits in the nightcap – two by Prather including a double, and one each by Patterson, Isanogle, Dalton Williams, Mott, DeLisi, Cunningham, Torres, Betz and Eric Ball.

The Hustlers are back in action this weekend when they travel to Rehoboth Beach, DE for the Sports at the Beach Swing Away Tournament. The Hustlers will up the ante and compete in the 16U division.

The 14U Frederick Hustlers started the Fall season off with a major challenge -- the USA Baseball Wood Bat Labor Day Cup at the National Training Complex in Cary, NC. Proving no test is too big for this group, the Hustlers pulled off the shocker winning the Championship and many new admirers with their sparkling play and gritty determination. The Hustlers got a stellar, complete game outing from RHP Nick DeLisi and turned in three deflating double plays in defeating an ultra-talented U.S. Stars team from Canton, OH 9-2 in the title game. “Definitely one of the best games Nick has thrown,” commented Coach Main afterwards. “He had all three pitches working and could seemingly throw them for a strike in any count.” DeLisi only allowed four hits, no walks and struck out seven. Colby Patterson got things going in the top of the first when he led off with a sharp single to left. Singles by Matt Kulikowski and Matt Cunningham scored a run and had the Hustlers feeling good about themselves. The Hustlers would add four more in the second, one in the fifth and three more in the sixth. Matt Cunningham and Colby Patterson each had two hits, while Kulikowski, DeLisi, Eric Ball and Dalton Williams each had one. Dustin Isanogle scored three runs.

The semifinal game was arguably against the best team in the tournament and was a nail-biter from the first pitch. The Hustlers rode a two-hit, seven strikeout, complete game masterpiece from LHP Marshall Mott to beat the Hit-N-Run Baseball Academy 1-0. “Marshall is a gamer. He wants the ball and wants to send you back to the dugout,” said Coach Main. The Hustlers only mustered three hits – two by Mott and one by DeLisi.

The game that got the Hustlers into the final four was another pitcher’s duel and the Hustler’s RHP Matt Kulikowski did not disappoint. The Hustlers faced former Major League Pitcher Mike Gardiner’s Charlotte Stealth squad but it was Kulikowski who was big time. Matt worked six innings of three hit ball with ten strikeouts. “Can’t help but love this kid. He knew we needed this game and he just smiled and said, I’ve got this Coach,” said Main. Ryan Bennett worked the seventh inning with one strikeout for his second save of the tournament. Dustin Isanogle singled and Mott and DeLisi followed with doubles in the first to account for the three Hustler runs.

The Hustlers won game one of the tournament 7-5 against the Warriors from Fayetteville, NC. The Hustlers scratched out nine hits with Mott getting two and Patterson, Isanogle, Kulikowski, Cunningham, Prather, Gabe Torres and Ball each getting one. DeLisi, Stephen Betz, Mott and Ryan Bennett combined for the win on the mound.

The Hustlers only loss in the tournament came in game two when they lost 5-3 to MVP (Greenville, NC). Mott had two hits and Ball had one. Patterson pitched four strong innings and Tyler Prather was equally effective for two in the loss. The Hustlers trademark defense went missing in this game.

For the tournament, Marshall Mott garnered MVP honors with a sizzling .538 average, a dominant outing on the mound, and sparkling defensive play at 1B. Other Hustlers that had good offensive showings were Ball (.375), DeLisi (.308) and Patterson (.300). Isanogle turned in back-to-back defensive gems behind the plate in the semifinal and Championship games. 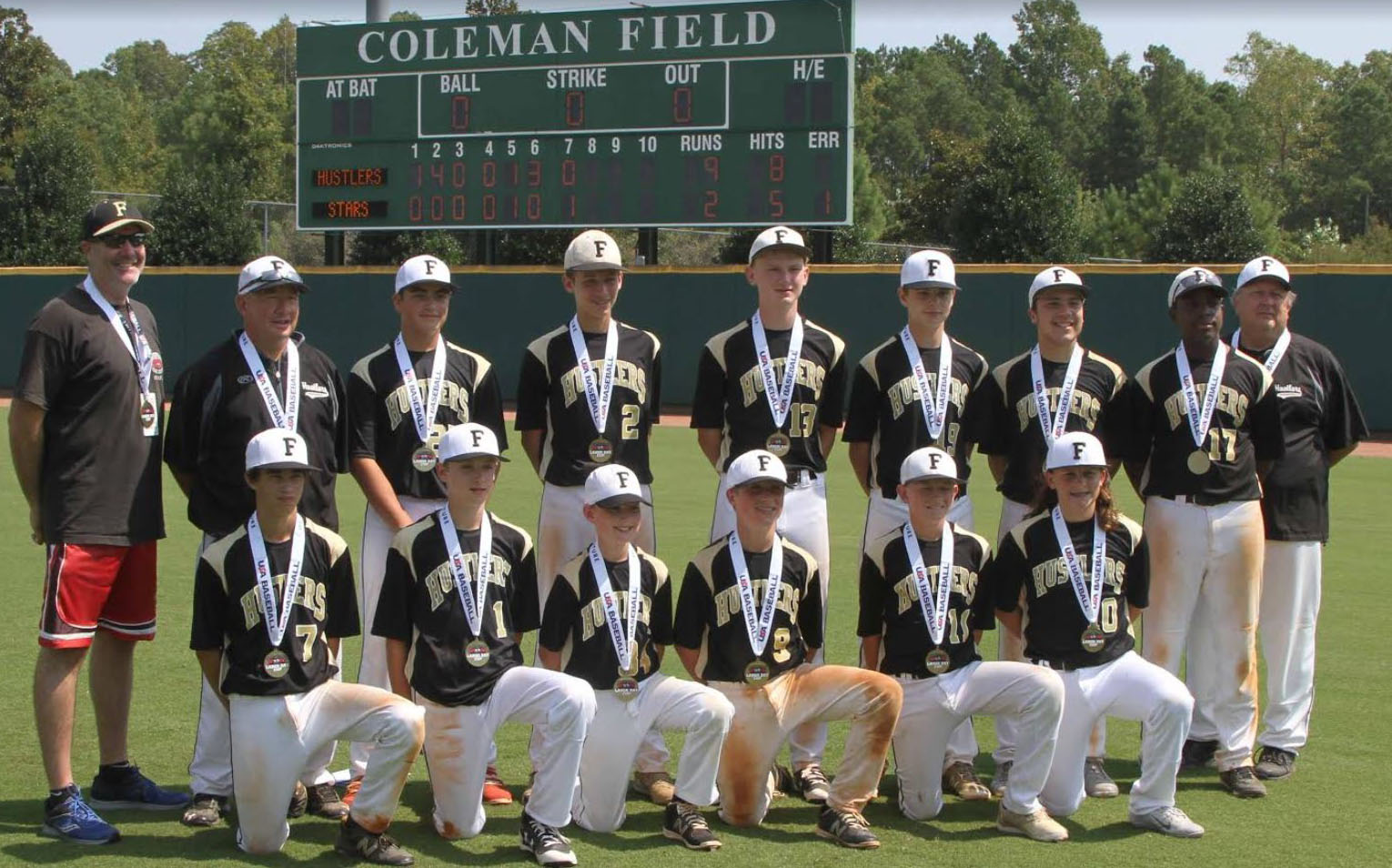 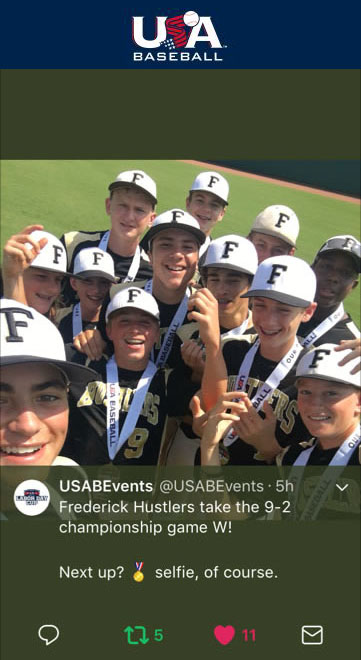 A big thank you to all of those that attended our tryouts over the four days.  We understand that we are one of many options out there today for travel baseball and we are most grateful that you continue to support and give us a chance to teach the game we love.  Over the next couple of days, lists will be appearing of those who made the different age groups.  Congratulations to those who made our teams.  To those that didn't, I challenge and encourage you to work hard at your game and come back next year and prove us wrong.  We acknowledge that we make mistakes in the selection process and nothing is more gratifying to me than those who come back the following year and make our teams.  As we begin our 18th year of Frederick Hustlers Baseball, we owe much of our success to you. 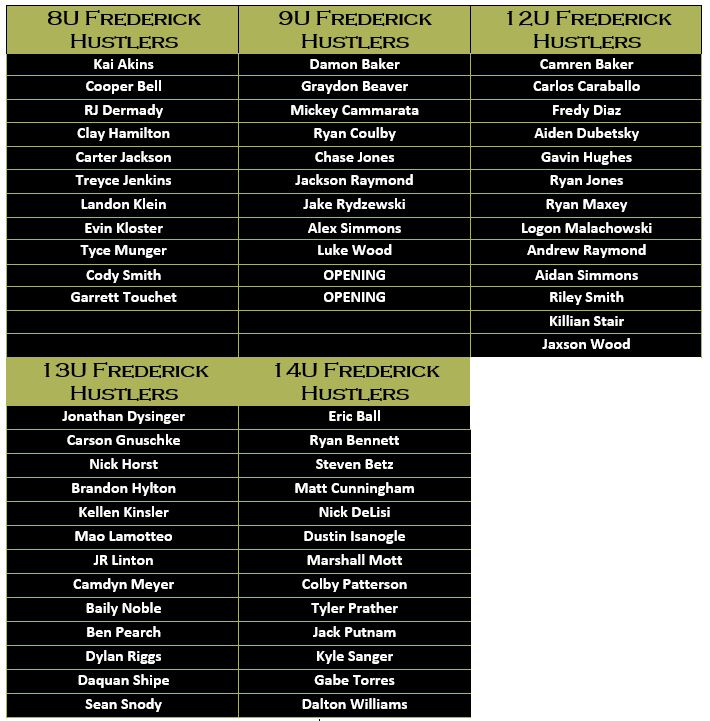