hide
hide
No announcements have been posted yet for Ouzo F.C.

Welcome to the Official Website for Ouzo Indoor Futball Club.

Formed in the winter of 2002, Ouzo FC spent 10 years at Soccer City in Etobicoke. After starting in the 3rd division on Sunday's, Ouzo FC were promoted to the 2nd, then the Sunday 1st Division.

In 2009, Ouzo F.C officially became an Indoor Futball Club, by creating a second team in the Thursday 1st Division.

In 2012, Ouzo FC moved as one team to the Hersey Centre(Mississauga) for one season and the following season to the Oakville Soccer Club (Open Age Sunday league) where they can still be seen today.

Well known for their drinking abilities, Ouzo F.C continue to prove that they are not only fierce competitors on the field, but a force in any bar. With years of practice this is where the team really gains there advantage. With hours spent scouting their opposition, along with sampling some of the worlds finest Ale's, Ouzo has created a team that will live and die for the cause. The cause at this point is unknown, but that doesn't stop the lads from playing for each other every week.


Enjoy the site and make sure to check back for scores, standings, stats and news on the team.

Don't forget to keep up-to-date with Ouzo International in the A.D.S.L.

Want to be a member of Ouzo F.C, but just can't seem to make the team? Don't worry, because there are many people just like you. Check out the Ouzo F.C Team Store for all your Ouzo Team Gear. 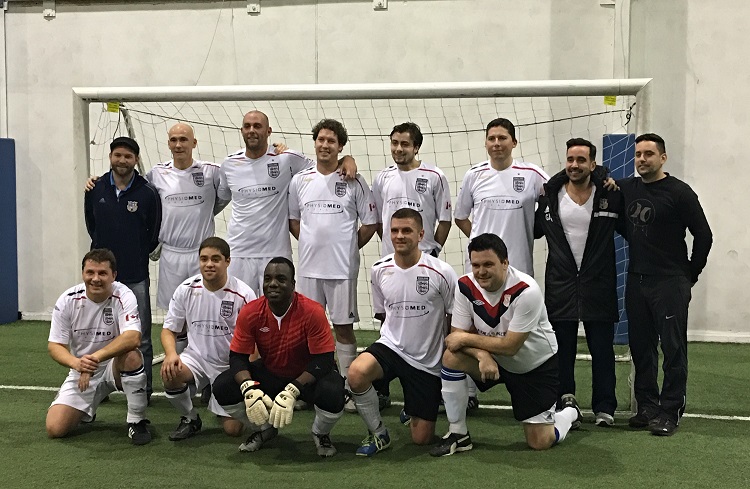 JAck BAuer joins Ouzo Member Behn Wurthman at the Mancity supporters bar in toronto. The affable Canadian was offered a try out with OUZO FC but as he only drinks Jameson's he had to respsectfully decline his offer of membership. 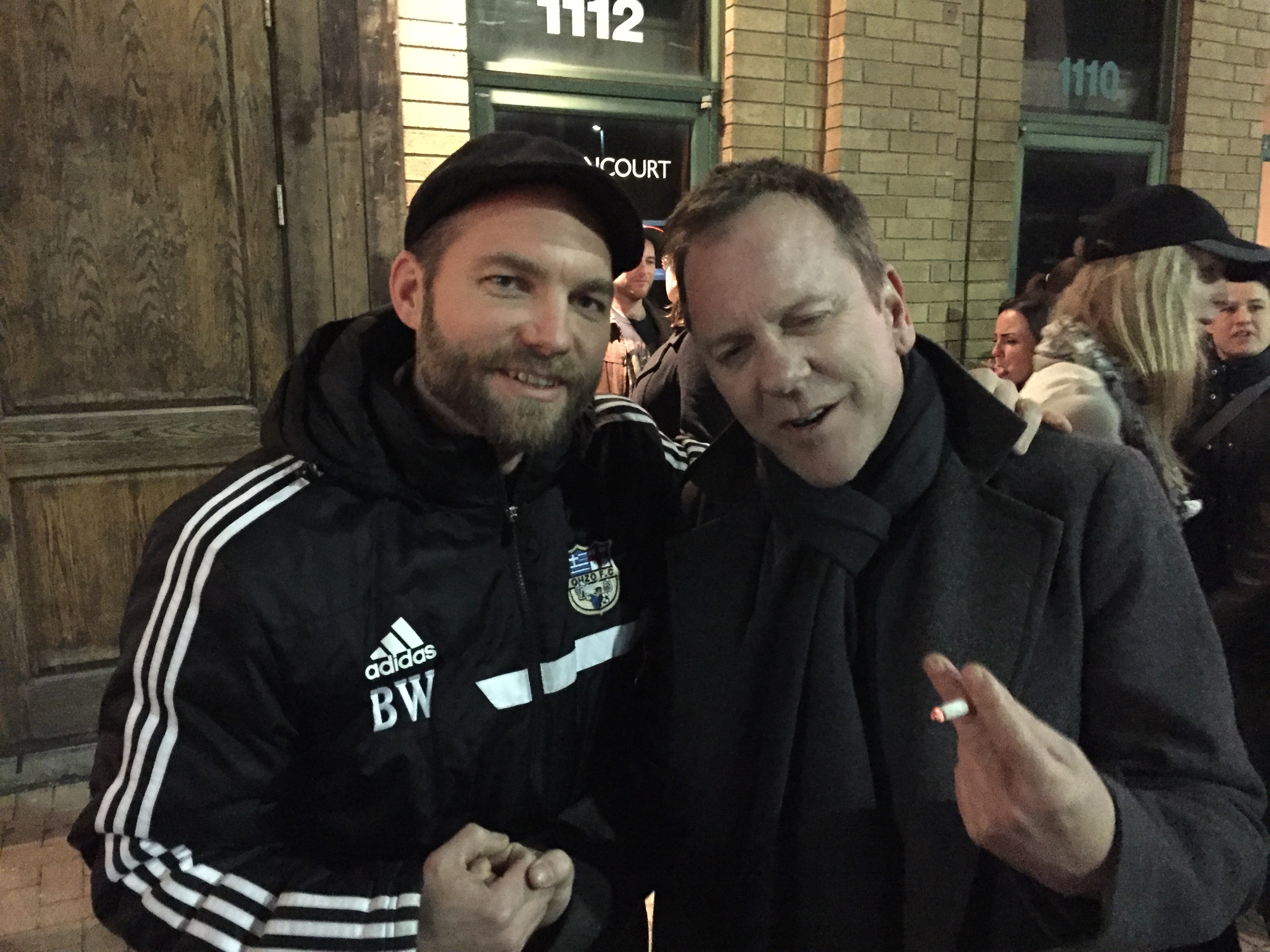 In case you were under a rock (that Steve may have thrown at some point) the world of OUZO FC started 2016 with a bang. Penalty shoot out winners(twice), double champions, t shirt wearers, shot sluggers, Pitchers swiggers, wing munchers and ultimately shirts off! It is now a fact.......someone get the tank! All in days work for Ouzo FC but it has to be said, It was in doubt through most of this topsy turvey final.

On the sidelines were a formidable support cast with alumni member Dodi, Gus 'I got a scan in the morning', JJ '2015 ouzo supporter of the year' and Mrs Behn 'I only do finals in my hooker boots' all in attendance.

With a late call off by Adam 'my wife is partying harder than me tonight', coach Wurthman 'being injured sucks' had to make some tough decisions before kick off. Ex defender Steve 'I have gone ouzo old school with a shot of rye before kick off' came back into the D to be in rotation with gay partner Andy 'any slide tackle will do' and stay at home defender ceca 'lets bomb on really'. Nesa 'the particulary angry serb who had forgot his ouzo white' was partnered by Jesse 'defend from the front by taking theirs ankles' up front. The rotation of Matt ' this is payback for last years final' and Stu' 12 years and still winning' gave the mid its steel and Brennan' goals is my middle name' and Jordan 'this is my first ouzo final win' providing the creative flair.

All seemed balanced and going well with Ouzo taking first blood. The ball was put down the right for Nesa to cross with a slight deflection Brennan was there to roof top corner. After a number of chances and many quality saves from their keeper, Ouzo would loose their concentration, positions and heads. In a crazy 10 min spell would squander the lead and ship 3 more goals. 4-1 and half time looming. With general anger, water bottles were kicked, fingers pointed and voices raised. Time to refocus.

The message was clear, we needed old time ouzo football. Give nothing up at the back, boss the mid and create havoc up top and give them no time. The next goal will change the game. And it did. Jesse' winning is better than losing' would lead from the front. With constant pressure on their back line and a couple of good hacks, CSC knew we would not give in.

Game changer. After a string of great saves by both keepers Ouzo would pop one in thanks to service once again from the right and Brennan knocking in low at the far post. Up stepped Matt to toe poke from the box. 4-3. Nerves jangling we pushed on and with 5 mins to go Nesa and Brennan would finally get on the same page to score. 4-4 and momentum with Ouzo FC. More of the same gets the win.

Unfortunately for Ouzo this was not the case and with 3 mins to go a mis-hit shot would deflect off the CSC player and into the net. 5-4. They think its all over....but wait. In the last minute, Nesa would finally solve the keeper from close range and put through his legs and score the tying goal and take us to penalties.

Stop. Neptune time! With Brennan and Nesa converting it was up to Mike to stop CSC. You could hear the boom as the CSC striker piled driver one at Mike only for the burly goalkeeper to take the full force off his chest and deflect back from the goal. Stu would step up for the final pen and the win. With tension at an all time high, he put it away like it was an ouzo shot. 3-1 and let the HIGH 5'S begin!!!

All that was left was the photos and the bar. Both of which were trending and well documented on email, text, twitter, FB etc during the night....including the $460 bar bill!

Jesse's MOM: Jesse ' that one has to hurt them' for his old school Ouzo work rate.

Its been a pleasure guys... Ouzo Gear and Double double???

OUZO FC win first ever penalty shoot out to go through to Final?

Ouzo FC finished 2015 as the Open Age OSC West (or 1st) Div Champions. This was something to be proud of, having been put in the 3rd div for the spring of 2015 and blooded in several new ouzo members this year.

So to the first days of 2016 and a push to the playoff final and a potential double. In our way were Windermere FC, who had lead the league most of the season and had beat us 2-0 last time out. This would be a tough game and only a team effort would give us a chance. Not only were wise words passed down from the 'Anderson think tank' but also back up support of Gus 'the Dr's still cant work out whats wrong' , Ruz 'waiting in the wings' and Nesa 'i will only play if you really, really really want me too' who were on the sidelines before kick off. The later, deciding half way though to get changed and play. This may have been because he was so excited to be involved and wear his Ouzo England white or it maybe due to the fact we went 2-0 down in 5 mins. Ouzo were not on their toes from the start and the team D let us down.

However, now we were warmed up and had nothing to lose. We starting pressing harder and turned the tide. With a corner won, the gap would appear on the top of the box for Ceca 'I love to play' to slot in a pile driver. 2-1. Tails up lets do this!! More pressure at the back and a quick pass to Matt' I am ouzo match fit again' who released Brennan 'the silent assassin' down the right and with a quick step not even seen on DWTS he'd pass the defender and square for Delaney 'i want this goal, i want this win, I WANT AN OUZO FINAL AND A T-SHIRT' to poke in. 2-2 half time.

Half time team talk would have been different without that goal but ultimately with Behn 'i need a ***e' in the stalls Delaney would come the fore and give out a plan.... go for the win!! Nesa slotting in up top with Jesse and Steve and keep the subs rolling. This plan seemed simple enough but half way through we would leave the back door open and with Mike screaming for cover the overlap was there and so was the goal. 3-2 down

Gut check time. In bizarre circustances, Behn would pull up injured after attempting his best Steven Gerrard impression and this would prove the TSN turning point. With Stu '1 pint slimmers delight' slotting back to D and Jesse 'MOM in tow' in the mid it allowed for a little more 'Nesa time' (not to be confused with fergie time) and serb would swivel and shoot with the only option for a defender to handball on the line. Red card, 5 min pen and penalty shot. Brennan would step up and dispatch. 3-3.

5 on 4 gave us the overlap on the right side for Stu to cross and nesa to finish. 4-3 and nose in front! But with a penalty of our own we gave back the advantage and the lead 4-4...straight to Pens. Time for keepers to step up and with Mike' get that monkey of my back' making 3 huge saves ...Ouzo would prevail 2-1 and take their place in the final and the pub for beers, wings and the end of the NFL reg season in which Rusnov won ... again!!

The final will be next week at 9pm. Assuming all are in, management will be looking at the team plan for our first double at the OSC!!!!

Ouzo come from behind to pull off another win

SOCCER CITY:  ETOBICOKE - Ouzo FC kept their unblemished season going with a tenacious come from behind victory over a physical Mississauga United squad by a score of 4-3.  Despite being down 2-0 at halftime, Ouzo did not panic and scored a quick goal to start the half which made it 2-1. Ouzo would pull even before United responded to take a 3-2 lead. Then with Ouzo staring a possible defeat in the eyes, the boys in blue re-focused and scored a pair of goals in the final 8 minutes to claim victory. Man of the Match went to the Tango 12 which recorded its first victory representing Ouzo FC.

Next match action is Sunday at 1045pm versus Ukraine United. This promises to be a tough match as the Ukraine sit in second place and still harbor thoughts of catching Ouzo FC for first place and the much fancied banquet. A victory by Ouzo essentially sews up the league.