This one was over by halftime, however, as Holliston showed off the winning culture that’s been built for years under head coach Todd Kiley. The Panthers led by 28 at the half and rolled to a 48-0 win.

HOLLISTON — The regular season ended on Friday night for many football teams in Massachusetts, but Ashland and Holliston were already in playoff mode.

This one was over by halftime, however, as Holliston showed off the winning culture that’s been built for years under head coach Todd Kiley. The Panthers led by 28 at the half and rolled to a 48-0 win.

Holliston finishes the regular season at 6-0 overall, 5-0 in the league. Ashland fell to 6-1 (4-1 TVL). Both teams await its playoff fate, which is to be determined this weekend.

“I was proud of the way we played on both sides of the ball tonight,” Kiley said. “I think if we play them again it’s a little different, but our guys were ready tonight. We’ve got great kids, and when you have great leaders on both sides that kids lean on, good things are going to happen.”

The Panthers couldn’t have scripted a better opening 22 minutes.

After each team traded punts to begin the game, Holliston started its second drive at its own 45-yard line. Eight plays later, Dylan Ibbitson scored on a 13-yard touchdown run and Andrew DelPonte added the PAT for a 7-0 lead.

The Clockers were forced to punt again on their second drive and Holliston took over at its own 33 with 9:56 left in the half. Just three plays later, Tristan Benson (12 carries, 122 yards) broke loose for a 55-yard TD run for a 14-0 edge.

Another Ashland punt ensued and a huge return by Mitchell Gimblett brought the ball down to the 1-yard line. Matt Tomacelli lined up under center a play later and punched in a quarterback keeper to make it 21-0.

Ashland established its first lengthy drive on its next possession, taking over at its own 32 and driving down to the Holliston 25, but the Panther defense continued to clamp down, forcing a turnover on downs with 3:09 to go until the half.

“We take pride in everyone being able to contribute,” Benson said. “We’ve worked hard together since the start of summer and everyone here is all about the ‘We’ before the ‘Me.’ Knowing you can trust the guy next to you is what makes us so dangerous I think.”

Ashland opened the second half with a 12-play, 5-minute drive that began at its own 32 and wound up with a first-and-goal at the Holliston 9-yard line. However, the Panthers ultimately forced another turnover on downs.

A 20-yard touchdown run for Ibbitson and missed PAT made it 34-0. One play after the kickoff, Christan Schneeloch came up with a 60-yard interception return for a touchdown to make it 41-0. Two plays after thatnext kickoff the Panthers got a 34-yard fumble recovery from Gimblett to make it 48-0 heading to the fourth quarter.

Ashland had one final chance to break the shutout with a third-and-goal at the Holliston 1-yard line with 5:12 left in the fourth, but Seth Bello came up with an interception in the end zone.

And now, Holliston is living large with TVL title in its back pocket.

HOLLISTON — With a Tri-Valley Large title hanging in the balance, Holliston’s play up front pushed it over the top.

Centered around Harvard commit Scott Elliott, the offensive line helped pave the way for a rushing attack that totaled over 270 yards as the Panthers defeated Ashland, 48-0 to win the division title at Kamitian Field.

Defensively, the Panthers were relentless. Elliott, Will Crowley and David Harding provided consistent pressure up front while defensive backs Ibbitson and Mitchell Gimblett blitzed off the edge.

“We came out focused and firing,” Elliott said. “Up front and running the ball has been our strength. After last year, this was our goal from day one.”

Holliston (6-0, 5-0) featured a diverse offense over the first three quarters, with six different players contributing on the ground and four players finding the end zone. Tristan Benson led the Panthers with 12 carries for 112 yards.

“To start our season, we knew our guys up front would be the heart and soul of our team,” said Holliston coach Todd Kiley. “Scottie (Elliott’s) up there. His play, his leadership — I’ve never seen anything like it. He’s the guy you want leading this football team.”

Holliston scored on four consecutive drives in the first half to put the game out of reach.

Ibbitson opened the scoring on the Panthers second possession with a 13-yard touchdown.

After a sack by Harding gave Holliston the ball back, its ground attack went back to work. One play after Matt Arvanitis scrambled for 12 yards, Benson received an inside handoff, found a burst of speed and took off for a 55-yard touchdown run to give Holliston a 14-0 advantage.

The Panthers defense, meanwhile, prevented Ashland from picking up any positive yardage on six straight plays.

Holliston’s special teams unit then joined in on the avalanche with a 51-yard punt return form Gimblett to set up Matthew Tomacelli’s 1-yard score and a 21-0 lead.

Ashland had a chance to get on the board late in the second quarter by working down to the Holliston 20-yard line. Three consecutive pass break-ups, including a touchdown-saving swat by Logan Brooks, turned the Clockers over on downs.

Moments later, the Panthers provided the nail in the coffin. After a 20-yard completion from Arvanitis to Ibbitson, Billy Nash took a jet sweep 40 yards down the left sideline for a touchdown to put Holliston on top 28-0 at the half.

Holliston, once again, takes Tri-Valley Large in a runaway

Holliston gassed the Clockers (6-1) early and often with an array of rushes that showed off the Panthers’ blessed perimeter speed, cruising to a 48-0 win to wrap up yet another TVL Large crown and carry a wave of morale into a D5 South playoff field that’s expected to be a cauldron.

“Obviously this is going to give us some momentum, you would think,” Holliston coach Todd Kiley said.

“But honestly, this group is unreal as far as staying on the task at hand. So I think, obviously it’s going to help, but it’s a lunch pail group – regardless of the score, they’re coming to work.

In the first half, the Panthers racked up 173 yards and four rushing scores to take a commanding 28-0 halftime lead. Ibbitson’s 14-yard stretch left for the game’s first score was followed by an eye-opening 55-yard touchdown scamper from Benson. He took an inside handoff up an interior right-side gap and outsprinted the secondary to make it 14-0 early in the second quarter.

Benson’s score was followed by a 51-yard punt return from Mitch Gimblett that set up the Panthers’ third score, a 1-yard sneak by Matt Arvanitis . Gimblett took the ball at the Panther’s “H” logo at midfield and burst up the middle, eventually getting dragged out of bounds at the 1.

The final score of the half, a 40-yard Billy Nash jet sweep, was just as impressive. The senior not only got to the edge quickly – he out-raced several Ashland defenders for the final 35 yards, for a 28-0 advantage.

Holliston capped its dominant night with defensive touchdowns on back-to-back plays to make it 48-0. Christian Schneeloch came up with an interception down the left seam and ran it back 61 yards, followed by a 32-yard Gimblett fumble return on Ashland’s very next offensive play.

Billy Nash had two receiving scores – one from 60 yards and the other from 15 – and added a rushing score of 30 yards for the Panthers.

Nash had two receiving scores – one from 60 yards and the other from 15 – and added a rushing score of 30 yeards for the Panthers.

“This group is a lunch-pail group and they go to work every day,” Holliston coach Todd Kiley said. “They’ve done a great job this year preparing for games.”

Holliston hosts Ashland on Friday at 7 p.m. with a Tri-Valley League Large title on the line.

“Our team has done a great job of taking it just one week at a time,” Kiley said. “Obviously, they’re high school kids and I’m sure in the back of their mind they have been looking forward to the Ashland game but they certainly weren’t overlooking Norwood in doing that.

2015 Alumni Joe Bellomo plays for United States Merchant Marine Academy where he is a senior this year.  Way to go Joe! 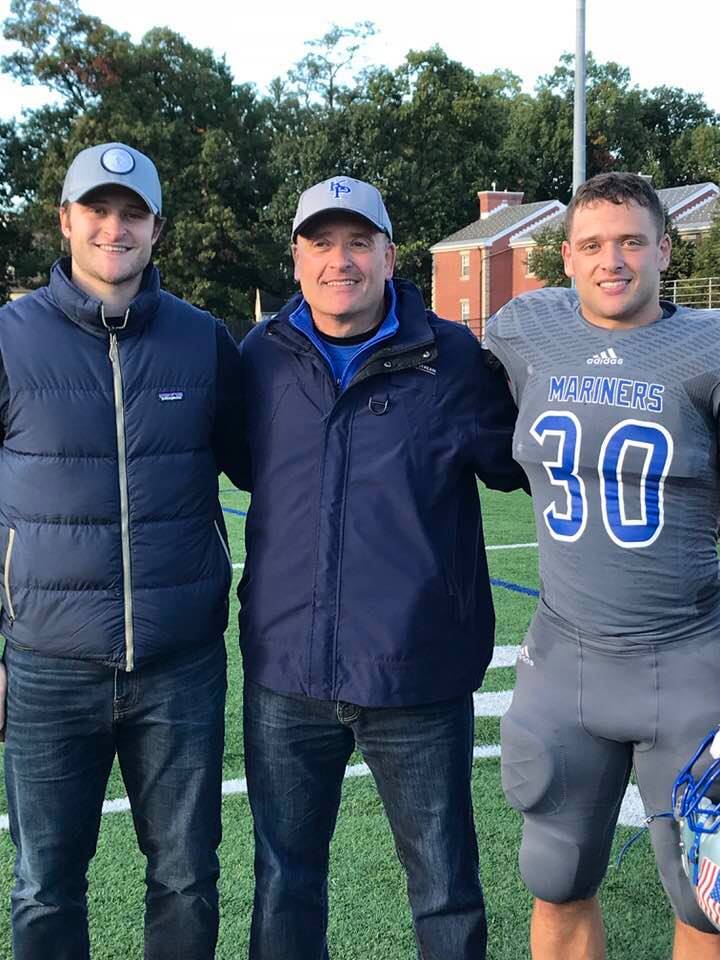