Fan of the Week- Somerset Berkley

Posted by Andrea Murphy at Oct 26, 2018 5:00PM PDT ( 0 Comments )
more editing options
This weeks Fan of the Week-  Alumni Joe Bellomo.  With a bye week from playing football for the U.S. Merchant Marine Academy Joe had to stop by and watch his fellow Panthers.

For SB, Connor Sterling and Robert Shaker each intercepted a pass and Bryce Garretson had, said coach Nick Freitas, “a career day” at linebacker.

“This group has done a great job of staying grounded against whoever they play against,” Holliston coach Todd Kiley said. “We are going to have a great week of practice and be ready to go against Scituate next Friday.”

The Panthers host No. 3 Scituate on Friday.

The Gillette Stadium lighthouse is now in sight and the GPS for high school football teams heading to the postseason reads 1 Patriot Place in Foxboro.

A year ago, the Warriors were oh-so-close to capturing the Division 2 state title against a red-hot King Philip team, but ultimately lost 10-7 in what was one of the best games of the Super Bowl weekend.

So far this season it’s been apparent the 2018 version of the Warriors have been on a mission to get back under the bright lights at Gillette and walk out with some hardware. L-S enters the playoffs at 6-1 and the second seed in the Div. 2 North bracket. The Warriors’ first matchup will be Friday night at home against seventh-seeded Masconoment (3-4). A win there would set up a date with either Reading or Peabody in the semifinals.

North Andover is the top seed at 7-0 and all signs point to a sectional title game meeting between the two, but if Reading (6-1) gets through Peabody this weekend L-S will have its hands full. Focusing on the task at hand – something head coach Tom Lopez has stressed throughout his years and something that has helped him earn his 300 victories – is going to be the key if the Warriors want to ultimately win a championship. It also doesn’t hurt that L-S’s senior captains all have the sour taste of a season-ending defeat at the home of Tom Brady still in their collective mouths.

2. Natick, Wellesley have work cut out

Barnstable (5-2, 5th) and Braintree (4-3, 6th) will provide its own set of challenges while New Bedford (3-4, 7th) and perennial contender Bridgewater-Raynham (2-4, 8th) can’t be overlooked. Natick faced Braintree back on Sept. 28 and came away with a gritty 21-7 win. Wellesley hasn’t faced Barnstable but lost a thrilling overtime game to Natick and also lost a shootout against Walpole.

While King Philip had a down year by its standards, you can never count out the defending champ until they’re out and Bridgewater-Raynham has a history of program success. Wellesley will open up Saturday afternoon hosting Barnstable (3 p.m.) while Natick hosts New Bedford on Friday night (7 p.m.). Home games to start will help in the first round but both BSC squads have their work cut out in D2 South.

3. Can Holliston get back to a Super Bowl?

The second-seeded Panthers (6-0) looked like the state title teams of 2014 and 2015 last week in a 48-0 shutout of Ashland, clinching a Tri-Valley League Large title. But the Division 5 South bracket is loaded, meaning a trip back to Gillette for head coach Todd Kiley and the Panthers won’t be easy.

Top-seeded Falmouth (6-0), third-seeded Scituate (6-1), fourth-seeded Canton (6-1) and fifth-seeded Hanover (5-2) can all make a claim that they’re best suited to escape this section. The Panthers should have a soft landing to open this Friday night when they host seventh-seeded Somerset Berkley (3-8), which would then set up a meeting against either Scituate or sixth-seeded Dennis-Yarmouth (4-3). Last year, Holliston was bounced in the first round by Scituate while Dennis-Yarmouth went on to win the Div. 5 state title.

There will be some TVL flare right off the bat this weekend in the Division 6 South bracket as second-seeded Ashland (6-1) will host seventh-seeded Dover-Sherborn (4-3) on Friday night. Meanwhile, third-seeded Medway will be hosting sixth-seeded Norwell (3-3) on Friday as well

In the regular season, Ashland barely squeaked by Medway with a 21-20 season-opening win and did not face D-S. Medway did face the Raiders and took care of business, winning 35-14.

Dedham (6-1) will also represent the TVL as the fourth seed. Old Rochester sits at the top of the bracket at 7-0 while fifth-seeded Apponequet (4-3) and eighth-seeded Bishop Stang (4-3) round out quite a strong collection of teams.

5. Things won’t be easy for Wayland

The Warriors had a great start to the season, going 5-2, but all it got them was the No. 5 seed in another stacked bracket. The Warriors open up at fourth-seeded Burlington on Friday night (7 p.m.).

Top-seeded Marblehead (7-0), second-seeded Gloucester (6-1) and third seed North Reading (5-2) led a very difficult bracket. If Wayland is able to beat the Red Devils this weekend then there’s a strong chance that a trip to Marblehead will await. How quarterback Mason Bolivar’s leg injury holds up after missing parts of the last few games will be something worth keeping an eye on with Wayland. 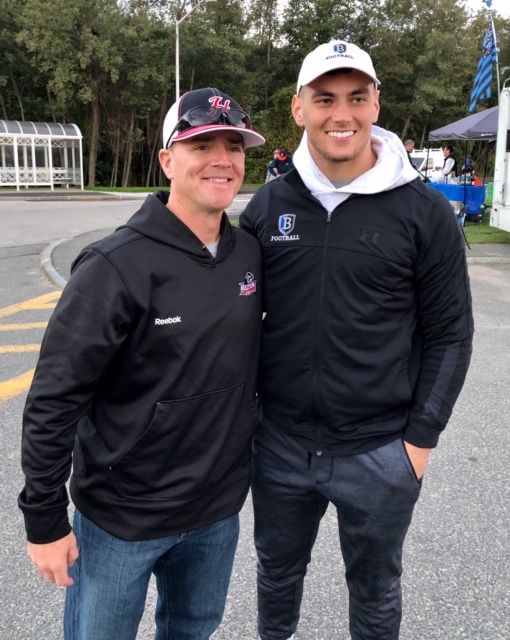