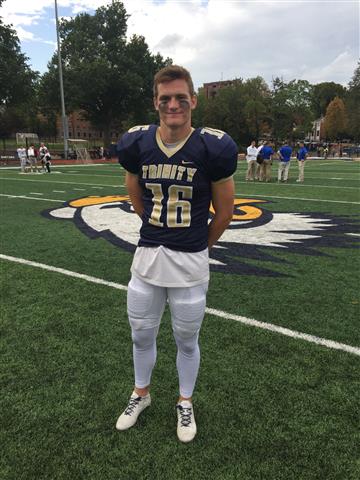 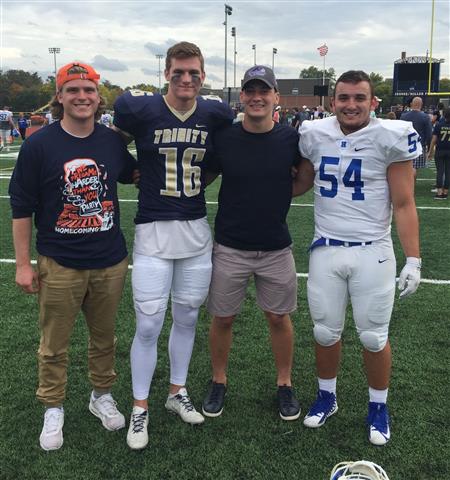 The 5-foot-11, 205-pounder had a hand in five of Bentley's six takeaways in a 40-21 win over Division II's ninth-ranked team. He made his second and third interceptions of the season, recovered two fumbles and forced another fumble in addition to being in on eight tackles.

Earlier this week, Athy was recognized as the Defensive Player of the Week in the Northeast-10 Conference.

For the season, Athy has 20 tackles, three fumble recoveries and three pass break-ups, in addition to three interceptions. 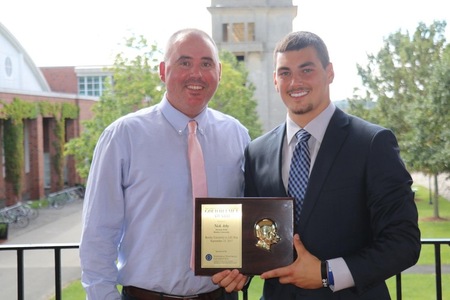 HOLLISTON — In recent years, the Holliston football team — more often than not — has been the one to limit its turnovers and force its opponents into turn the ball over.

But Friday night against an experienced, senior-heavy Medfield squad, the Panthers found themselves on the wrong end of the turnover battle and paid the price for it.

Holliston turned the ball over six times on three interceptions and three lost fumbles, with the Warriors turning the ball over just once. Ultimately, that played a huge part in Holliston being on the wrong end of a 28-12 Tri-Valley League Large decision at Kamitian Field.

It was the Panthers first loss to the Warriors since 2008.

“If you turn the ball over six times, you’re not winning the game,” Holliston coach Todd Kiley said after his team fell to 3-2. “You’re not winning anything. The turnovers were obviously a big contributing factor to them winning this game. Somehow, we’ve got to sharpen that up. We battled, but we just couldn’t make some key plays.”

The Warriors (4-1) came out and got on the board first less than three minutes into the game.

After the Holliston offense opened with a quick 3-and-out, Medfield started with the ball on its own 27. On the Warriors first play from scrimmage, senior captain Mason Giunta (20 carries, 131 yards, 2 TDs) took a handoff up the middle and gave his team early momentum by breaking free for a 57-yard run.

Five plays later, Giunta barreled his way in from three yards out and Cameron Lunn’s point after made it 7-0 with 8:20 on the clock.

On Holliston’s next possession, quarterback Ryan Benco (2 TD passes, 3 interceptions) was sacked by senior captain John Lowell and fumbled on the play, with Giunta recovering for the Warriors. The Panther defense, however was able to force a Medfield punt.

But the turnovers kept coming for Holliston.  On the second play of the Panthers ensuing possession, Benco’s pass was intercepted by Liam O’Toole — another senior captain.

On the very next play, Giunta took a toss left, cut inside, then bounced it out to the right before scampering into the end zone from 22 yards out. The point after was blocked, however, leaving the score 13-0 with 3:59 left in the opening frame.

“That’s a senior-laden team and we knew they were the team to beat coming into the season,” Kiley said. “They returned the most guys off a good team from last year.”

Following a Medfield turnover on downs, Holliston started with the ball on its own 18 with 5:45 left in the first half and went right to work with its ground game.

The Panthers — using six different players — ran 12 straight running plays, with Jake Armstrong’s 6-yard run on fourth-and-1 and Armstrong’s 32-yard run on second-and-8 being key plays. Eventutally, on the 15th play of the drive, Benco found Dylan Ibbitson on a middle screen and the sophomore made his way to paydirt from seven yards out. Connor Mulvaney missed the point after, leaving the score 13-6 heading into the half.

Following a scoreless third quarter, Holliston scored early in the fourth quarter when Benco hit Mike Nash for a 6-yard touchdown. Ibbitson tried to give his team the lead on the two-point conversion, but he was stuffed a foot short, with Medfield able to hang on to a 13-12 lead with 10 minutes left to play.

“If we get another foot there, we could be talking about different outcome because then they’d be down one and maybe changing what they have to do,” Kiley said. “For me, it was a no-brainer going for the two.”

The Warriors didn’t let the Panthers gain momentum, however, as they came down and found the end zone on their next drive, with Joseph Vachon scoring from 20 yards out. Giunta then rushed in the 2-point conversion for a 21-12 lead with 6:23 on the clock.

“They responded [on that drive],” Kiley said. “You’ve got to tip your cap to them, they deserved to win this game tonight. There’s going to be times when somebody outplays you and that was tonight.”

On Holliston’s next drive, Benco was intercepted by Ben Adams and the turnover turned into a Camron Giunta 2-yard score to wrap up the scoring and the game. 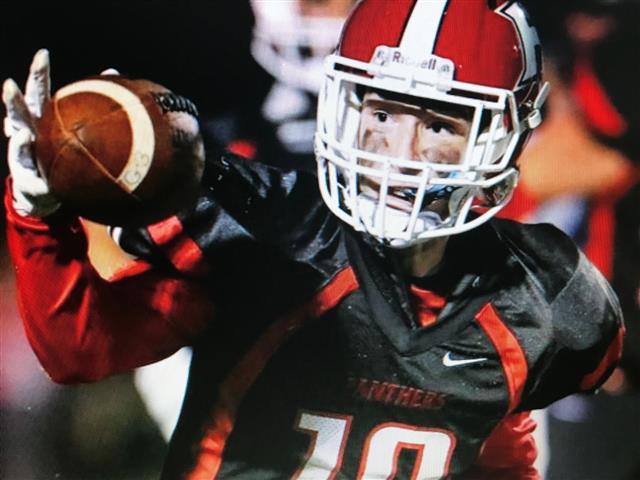 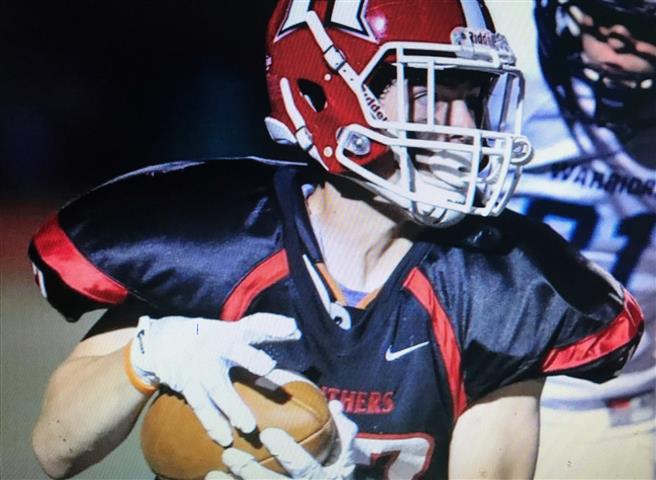 Fan of the Week- Medfield

This week's Fan of the Week- 2 of our favorite Athy brothers Sam and Nick.  We wish they were still wearing red.  Home from a  bye week from playing for Stonehill (Sam) and Bentley (Nick) they came tonight to cheer us on. 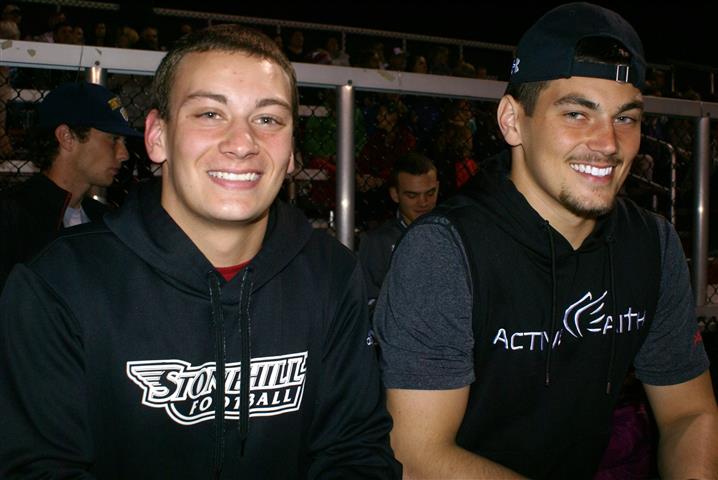 Picture of the Week- Medfield

Posted by Andrea Murphy at Oct 6, 2017 5:00PM PDT ( 0 Comments )
more editing options
This Week's Picture of the Week- Homecoming court.  With a few fill-ins for the football players. 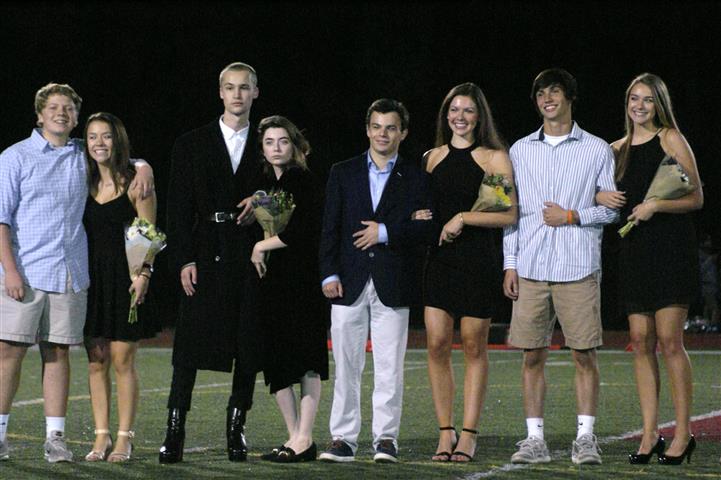 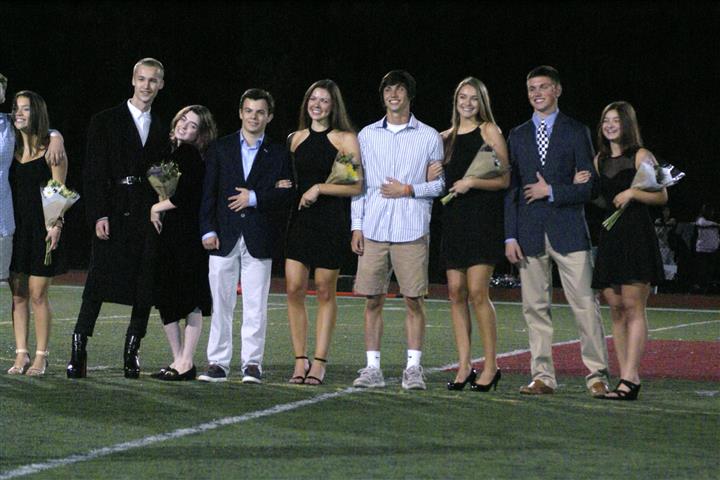