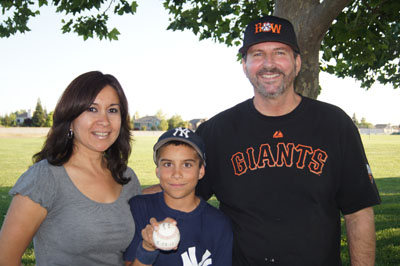 Today the Yankees tried for the third time to right the ship and set sail for the first seed in the divisional playoffs. The Mighty Bombers worked hard in this week`s preparation for the game against the Giants but ran into a buzz saw in the shape of the Giants pitching staff. The Bombers  managed to scatter eight hits but struck out twelve times. Team Captain and player of the game; Parker (The Real Deal) True led his team going 2-3, while other team Captain Andrei (The Big Cat) Buado 2-3 shared in the action; other top performers were: Jake (The Snake) Peralta 1-2, Jackson (Ajax) Shedd 2-2, Nick (One Eyed Willy) Lake 1-2. Yankee Pitchers: The Real Deal, The Big Cat; and Kyle (The Great Santini) pitched well scattering 7 hits but issued 6 free passes that helped lead to the Giant`s eight runs. Terrence (T-Bone) Berg and Spencer (The Road Runner) Floyd both made outstanding defensive plays keeping the game tight.

The 8-4 loss dropped the Yankees to 12-5 and clinging to a half game lead for the first seed and the division title.

Player of the game: Parker ( The Real Deal) True

Hustle Down the Line: Andrei (The Big Cat) Buado 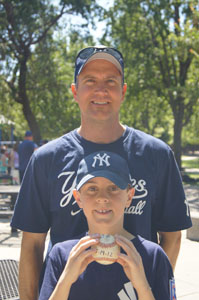 The Yanks squared off against the Red Sox for the second and final time this season. With the playoffs nearing and teams fighting for positions, Yankee fans were hoping to see the Bombers lock down one of the top 2 seeds for the bracket tonight, instead they witnessed an old school beat down at the hands of the Yankee`s nemesis ; the Red Sox. It was apparent from the start of the game the Sox wanted it more as the boys in pinstripes were a step behind all night and left a lot of plays on the field. The Yankee: pitching staff; defensive, and bats  fell silent as the Red Sox stampeded the over the bases in route to scoring 10 runs. Yankee top performers : Terrence (T-Bone) Berg 1-2, Parker (The Real Deal) True 1-2, Andrei (The Big Cat) Buado 1-2, Jake (The Snake) Peralta 1-2, Kyle (The Great Santini) Santin 1-2, Jackson (Ajax) Shedd 1-2 and Spencer (The Road Runner) Floyd got his first hit of the season, an RBI singkle that scored Nick (One Eyed Willy) Who had just scorched a triple. 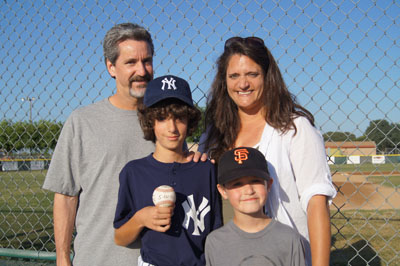 Saturday Night was the final match-up of the regular season for the Padres and Yankees. The Yankee Clipper set sail in the first inning scoring four runs. The Bombers looked like they might run away and hide but the Padres scored 6 unanswered runs, as the usually dependable Yankee pitching staff struggled to find the strike zone. The Mighty Bombers made a valiant attempt at a comeback but fell one run short in the final frame and lost the contest of gladiators 8-7. The Yankees banged out 12 hits. Parker (The Real Deal) True and Kyle (The Great Santini) Santin paced the boys in pinstripes with 3 hits each. Other Yankees who sent bats to the aluminum recycling center were; Ramon (Mad Dog) Esparza III 2-3, Terrence (T-Bone) Berg, 1-2, Andrei (The Big Cat) Buado 1-3, Jake (The Snake) Peralta 1-3, Hayden (H) Mitchell 1-3. Jackson (Ajax) Shedd and Nick ( One eyed Willy) Lake made fantastic defensive plays and once again the dynamic duo of Spencer (The Road Runner) Floyd and Ryan (Pocket Rhino) Sancedo provided stellar back-up in right field.

With the loss the Mighty Bombers fall to 12-3, and barely clinging to first place. Will the Bombers prevail? Can they hang on with three games to go? Stayed tuned ! 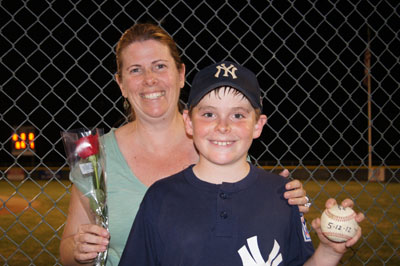 The Yankees and Tigers squared off in a battle for first place at Buljan Park last night.  When the smoke cleared the Mighty Bombers found themselves sitting a top the division with a 2.5 game lead. The Yankees played spectacular in all three phases of the game. Fantasic defensive plays were made by: Terrence (T-Bone) Berg, Jackson (Ajax) Shedd, Ramon (Mad Dog) Esparza III and Hayden (H) Mitchell. Superior defensive back-up was provided from the right field Dynamic Duo: Ryan (Pocket Rhino) Sancedo and Spencer (The Road Runner) Floyd Andrei (The Big Cat) Buado and Kyle (The Great Santini) handled the Cats hitters allowing only two hits while striking out 7. Yankees brought the wood as usual. The Lumberjacks wearing pinstripes were; Mad Dog 1-3; Parker (The Real Deal) True 1-1; The Great Santini 2-3; Jake (The Snake) Peralta 2-2,2b; Zach (Scooter) Berry 2-3; Ajax 1-1 and Nick (One eyed Willy) Lake 1-2.

With the victory the Bombers move to 12-2 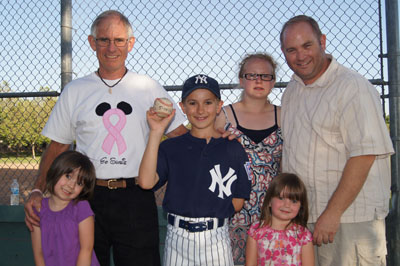