Message From City of Roseville

Field closure notifications are not recommendations they are requirements. It is our goal to get the fields open and available for play everyday. The safety of your participants and the potential damage to the fields are our top priority. We try to evaluate fields individually due to drainage issues or absorption capabilities. That is why some fields may be cleared for play while others are not. We also evaluate both the infields and outfields. In some instances we can open an infield for practice while the outfield remains closed. Each season the City of Roseville parks accommodates approximately 5,000 youth sport participants on over 50 fields. We respect and appreciate the relationship we have with the youth leagues, as well as, the service the leagues provides to the children and parents of our community. When individual leagues disregard the City's requirements it impedes our ability to provide safe, quality fields to your participants. It undermines their relationship with other leagues, and also jeopardizes the leagues future use of facilities. Field closure notifications are updated by 3 pm weekdays and 8 am on weekends. We try to allow as much time possible during the day for the fields to recover before making a decision. It is leagues responsibility to check the field conditions and then inform their players, parents, and coaches of any field closures. We appreciate the support of those leagues who truly work in partnership with the City in delivering this message.

Bombers Slam their way to the Championship

The Mighty Bomber`s season came to a close Saturday, as they faced off against the streaking Giants. The G-men came into the game riding a three game win streak, and looking to upset the number one seed; Yankees, for the AAA Chamionship. The Bombers came out ready to play and never relented. They mashed out 12 hits, two of them grandslam homeruns. Jake (The Snake) Peralta hit a mammoth grandslam in the first inning to kick the door open and Andrei (The Big Cat) Buado hit a colossal, walk off grandslam in the final frame, to slam the door shut in dramatic fashion. Other Yanks banging out hits in the championship game were: Terrence (T-Bone) Berg 1-1; Ramon (Mad Dog) Esparza III 1-1; Parker (The Real Deal) True1-1; Andrei (The Big Cat) Buado 3-3, HR; Kyle (The Great Santini) Santin 2-2; Jake ( The Snake) Peralta 1-1, HR, Zach (Scooter) Berry 1-1; Jackson (Ajax) Shedd 1-2; Ryan (Pocket Rhino) Sancedo 2-2 and Spencer (The Road Runner) Floyd 1-1. Kyle (The Great Santini) Santin and The Big Cat: Andrei Buado, continued to show why they are a couple  of the best pitchers in the game, allowing only three runs on three hits, and striking out six. The Yankees were also spectacular on defense, Nick (One eyed Willy) Lake`s sliding grab of a line drive stopped any hope of a Giant comeback. Other Yankees supplying solid D were: Terrence (T-Bone) Berg; Parker (The Real True), Hayden ( H) Mitchell, Jackson (Ajax) Shedd, and Andrei (The Big Cat) Buado.

With the 16-3 victory the Boys in Pin Stripes win the AAA Championship!!!

The Yankee Organization would like to throw out a special thanks to its team captains: Parker (The Real Deal) True; Andrei (The Big Cat) Buado and Kyle (The Great Santini) santin, The leadership shown by these three played an important role in the team`s chemistry that led to a successful season and ultimately a team championship. 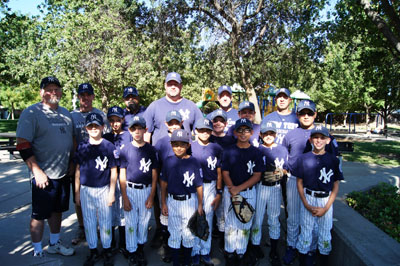 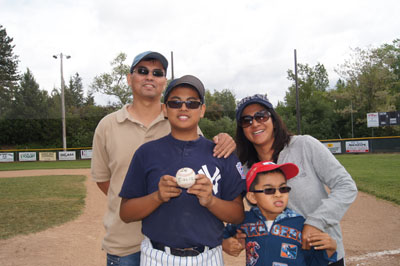