Andrew Gray was the perfect center back...big, strong and with just enough speed to get the job done.  He played stopper for the Vikings and was a great leader to a young team.  He completed four of the five expectations coming into the season.

In 2006, his senior year, Andy was the captain, earned his third varsity letter and started all 18 matches.   His effort was the same every day...his best.  This effort was a great example to the younger players and an encouragement to the coaching staff.  He received the following honors:

His last minute 50 yard score versus Wilmington, known as the "Go Baby, Go" goal, will be a Miamisburg soccer highlight and memory forever. 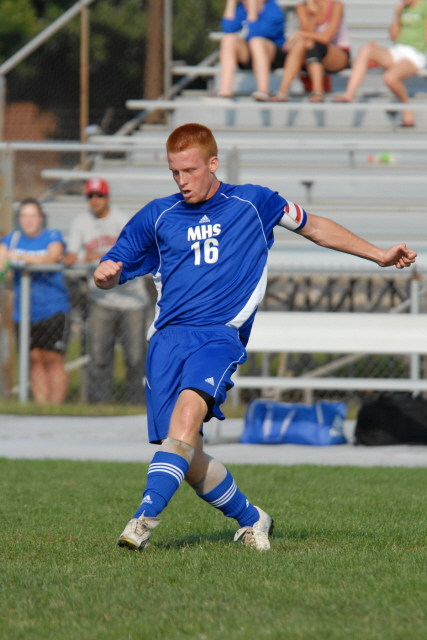 Posted by Terry Stump at Oct 16, 2006 5:00PM PDT ( 0 Comments )
more editing options
Rich is an avid soccer fan and still lives in Miamisburg with his wife Renee and their three kids, Maria, Trey and Olivia.  Rich played for the Vikings for three years as Goalkeeper and was voted Most Improved Player in 1981. He went on to earn his Bachelors degree in History in 1986 from the University of Dayton. Rich is currently the National Account Sales Manager for the International Truck Company. His favorite memory of his high school career is being captain of the team and trying to calm Tony Phibbs down after he got a yellow card in a game they were winning 9-2 with five minutes left. When asked to spell his name Tony told the Referee "P, H, I, B as in Bad, another B as in Bad, S as in Sucks." And magically the yellow card turned to a red card.

Posted by Terry Stump at Oct 16, 2006 5:00PM PDT ( 0 Comments )
more editing options
Jerry is still very active with soccer, currently he is the Miamisburg Vikings Assistant Coach. He has been coaching select youth soccer teams in Miamisburg for the past 9 years. He and his son Cameron make up the first father/son Vikings to earn Varsity letters on the soccer pitch. Jerry has a major role in the Viking Boys Soccer Parents Boosters as chair of the Alumni Committee. He played for Miamisburg High School for four years as halfback and forward. During his senior year Jerry was Varsity Captain, leading scorer with 9 goals and made the All League Second Team as forward. He graduated in 1996 from a Journeyman Apprenticeship Program and now works as a millwright for Appleton Papers. He still lives in Miamisburg with his two sons, Cameron and Matt. He will always remember all the friendships he started while playing Miamisburg soccer and plans to stay in touch with his teammates for years to come.