Week number 1 is completed for the 2013 Vikings and it has been a good one.

The Vikings traveled to Middletown in their first game to take on the Middies with a starting 11 of  ; Roark in goal , Siroki , Zech , Bussard , and Schacherer on defense , Eshbaugh , Affini , Schenck , and Cardenas at the midfield and Teaney , and Alsalhi up top . The Vikings came out flat to start the game and got scored on early for it . They did not play their game in the first half but earned a penalty kick on a great pressure run by Nick Brundage . Affini stepped up and buried the shot for the Vikings first goal of the season. Late in the half the Vikings gave up a free kick deep in their half and a player’s frustration earned him a yellow card for delay of game when he kicked the ball away. The Middies capitalized and scored to put them up 2-1 .The frustration continued for the Vikings with 2 more Yellow cards before halftime. One for retaliation and one for questioning the Ref on why he didn’t call the first foul. With just under a minute remaining in half the Vikings got a break away and Carl Cardenas finished nicely to tie the game at Halftime. Coach Randolph stated “I was very upset with not only the way we played in the first half but also with our personal composure. We talk very often about how to conduct ourselves and hold ourselves to a higher standard than others. I felt we were lucky to be tied but knew we could play our game in the second half and get back on track “ . The second half was much different play for the Vikings. They passed with a purpose to feet and moved the ball well. They were rewarded early with a free kick and Evan Teaney got his first goal from a deflection on the shot. Mid-way through the half the Vikings gave up a penalty of their own and the Middies finished it to tie the game 3-3. On this night the Vikings would not be denied a win though. A free kick was awarded to them and Ryan Zech stepped up at Coach Randolph’s urging. Ryan placed a nice shot over the keepers head to give them the lead 4-3. Just a few minutes later Evan Teaney scored on a break away for his second goal  to seal the game. A 4th Yellow was given for excessive celebration. The game ended 5-3 for the Vikings first win of the season. Coach Randolph said “I will take the win but I want my players to play with composure and respect. That wasn’t the case tonight and I am disappointed in my team.” Good game was had by Roark (21 saves) Brundage, Bussard, Siroki, Zech, Eshbaugh, Affini, Teaney, and Cardenas

In game 2 of the season the Vikings traveled to Stebbins. The starting eleven was Roark in Goal , Cardenas , Zech , Reeser , and Bussard on defense , Affini , Eshbaugh , Schenck , and Brundage at midfield Teaney , and Alsalhi up top . The Indians played better than the Vikings expected and moved the ball well getting several opportunities. The Vikings were surprised but continued to play their game. Several chances were had by them as well but the first half ended 0-0. Coach Randolph told his team at halftime to continue with the good play and great composure, but increase the pace of everything we are doing. The Vikings were rewarded quickly in the 2nd half with a nice pass to Evan Teaney from Mason Schacherer. Teaney hit a great one touch shot past a very good Stebbins Keeper.  The Vikings picked up their pace even more after the goal and put a lot of pressure on the Stebbins defense. With just 14 minutes to play Ibrahim Alsalhi put a shot on goal and Mason Schacherer followed up on the rebound to put the Vikings up 2-0 . Coach Randolph stated after the game “ I couldn’t be more proud of the complete turn around of composure in my team . We played very well and every player kept their cool the entire game and we were rewarded with a nice 2-0 victory for our first shutout this season.” good game was had by Roark  ( 5 saves ) Cardenas , Zech , Bussard , Schacherer , Eshbaugh , Affini , Schenck , Brundage , Reeser , Teaney , and Alsalhi .

The Third game of the season found the Viking at Home for the first time this season against the Greenville Green Wave. It was also Alumni night to celebrate those past players that could attend. The starting eleven was Roark in goal ,  Siroki ,  Zech , Bussard and Schacherer on defense , Affini , Eshbaugh , Schenck , and Cardenas at midfield , Teaney and Alsalhi up top . The Wave was playing their first game of the season and the Vikings proved to be a tough opponent. The Home team played with confidence moving the ball well with their passing game and getting many opportunities on goal. The first goal of the night came with 25 minutes to play in the first half. Ibrahim Alsalhi took a nice pass from Lucas Eshbaugh and put the Vikings up 1-0. It did not take long for the second goal just 1 minute later Kip Schenck hit Evan Teaney on a good chip pass and Teaney finished it. The Vikings dominated the play and shot from everywhere on the field. Eshbaugh showed his passing skills again finding Cole Dales on a full sprint and Dales buried a shot with 10 minutes left in the half. 3-0 Vikings. At halftime Coach Randolph told the team how great they had played but reminded them there were 40 more minutes to play and anything less than a shutout would be a disappointment. The second half began and the Vikings went on the attack again.   Eshbaugh fed Alsalhi again and a 4-0 score went on the board with 30 minutes to play. Schenk found Nick Brundage sprinting in from the right side and Nick placed a hard shot into the side netting for a 5-0 score.  Schenck kept up his unselfish play and hit Blake McCoy with a pass and Blake turned for a long range shot beating the out stretched keeper into the upper corner.  Wyatt Reeser provided the final assist to Schenck who had 3 assists and topped it off with a goal of his own with 19 minutes to play. Goal Keeper Will Roark recorded his second straight shutout of the season with 5 saves. The last 10 minutes of the game Coach Randolph asked his team to play possession only and wow did they show how good they are at passing. I do not think Greenville touched the ball more than a couple of times. Good games by all , Roark , Siroki , Zech , Bussard , Schacherer , Affini , Eshbaugh , Schenck , Cardenas , Teaney , Alsalhi , Brundage , Reeser , Dales , McCoy , Garland , and Maxwell.

The JV has played well with wins at Stebbins 1-0 and at home against Greenville 3-0. A loss in their opener to Middletown 3-2. 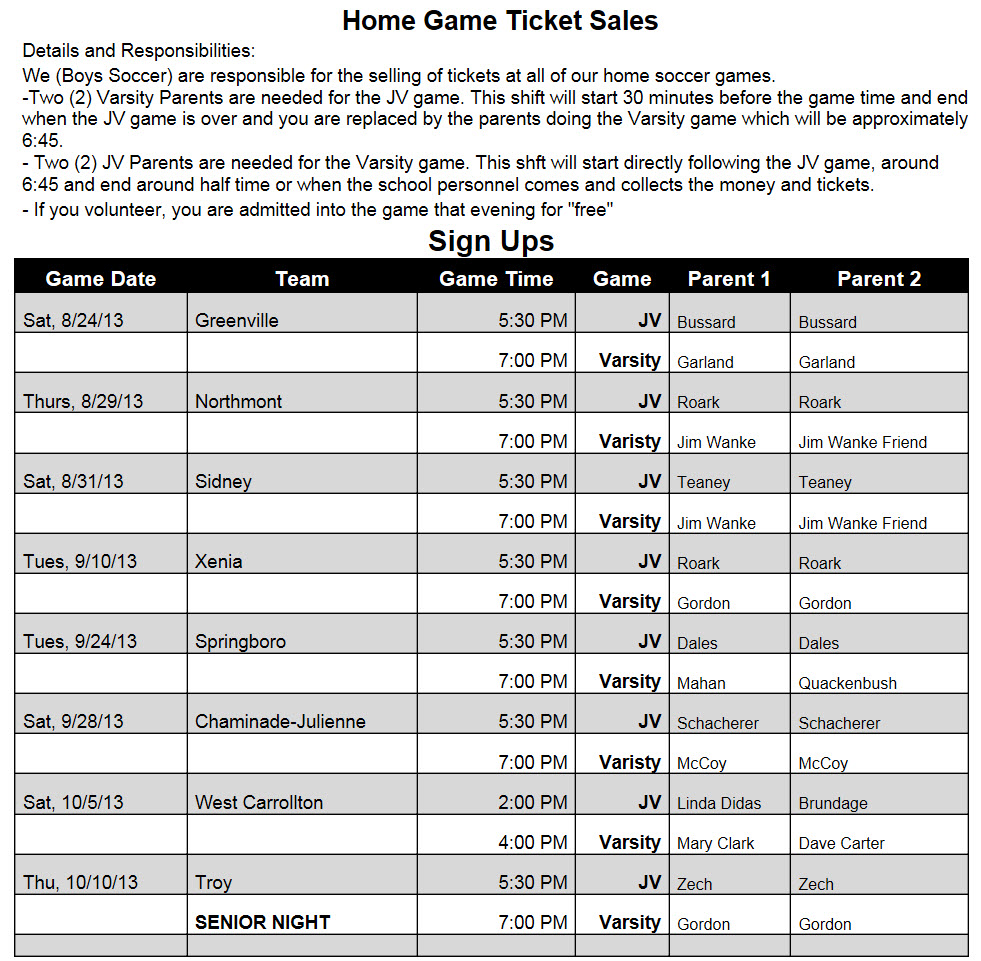