Former Al Thomas manager, Paul Degnan, longtime pitcher, Mike Feehily, and retired catcher, Mike Toland were inducted into the team’s prestigious Hall of Fame. Each inductee spoke of the kindness of Al Thomas, the quality of his teammates, the many friendships forged over the years, and the unabashed pride with which he wore the Al Thomas uniform.

Paul Degnan managed the A’s from 1990 through 1996, guiding the team to four straight championship appearances, including the thrilling 1993 come-back title against Savin Hill after being down 3 games to none. Not afraid to sacrifice himself for the good of the team, Paul developed a healthy relationship with the umpires around the league, defending his team in the face of judgmental injustices. Paul also served as Yawkey League Treasurer for 5 years, and attended league meetings at ungodly hours and inconvenient locations.
Paul guided the A’s to 121 wins in his managerial career, 3rd on the all-time list. With his fierce decision making and his familiar jog down to coach 3rd base, Paul kept the team afloat for many years. Another one of those little things that often go unnoticed, Paul brought the Gatorade Jug, filled with ice and water to every game for about 5 or 6 years. On behalf of the organization, it is an honor to induct Paul Degnan into the Al Thomas Club Hall of Fame.

Mike Feehily, aka “Touchy” joined the A’s right out of B.C. High and instantly made an impact, working himself into the starting rotation, where he remained for 13 years. Sporting a sneaky fastball, a nasty deuce, and occasionally sharp penny loafers, Mike amassed 68 career regular season wins, and an additional 11 playoff wins. One of his most memorable starts was Opening Day 1997 when no pitchers had thrown much in preseason, and Mike was asked to start the game and maybe go a couple of innings against the McKay Club. He responded with a complete game, 3 hit shutout with 11 k’s and a 12-0 victory on route to a 10-0 season. Always willing to do whatever was needed for the team, start, long relief, short relief, sometimes no relief, Mike was a consummate teammate and a fierce competitor. On behalf of the organization, it is an honor to induct Mike Feehily into the Al Thomas Club Hall of Fame.

In the history of Al Thomas baseball, Mike “Slows” Toland was the fastest running catcher….who hit lefty…He was a quiet, respected leader on and off the field for 10 years.  A disciplined hitter with a keen eye for the strike zone, he boasted a career average of .335, and a .385 average in clutch situations. Behind the plate, he was one of the best signal-callers the YBL has seen, with a strong accurate throwing arm that resulted in many pickoffs at all three bases. It is safe to say that Mike picked off more than 20 runners at first base throughout his career.  With a high on base percentage and superior baserunning skills, he was always among the team leaders in runs scored, despite wearing a knee brace the last five years of his career.
Mike also helped mold the younger pitchers on the staff and once stole a base. With his patience and eye at the plate, Mike developed a strong reputation and earned the respect and admiration of umpires throughout the league. When he was upset at a pitcher for not hitting his spot or throwing a poor pitch, he would fire the ball back to the pitcher harder than it was pitched, often resulting in the pitcher having to walk around the mound until the throbbing stopped in his hand. His career on base percentage ranks among the leaders in team history, and his ability to turn it up a notch in the playoffs was uncanny. He was a 3-time all star and 2-time gold glove winner.  On behalf of the organization, it is an honor to induct Mike Toland into the Al Thomas Club Hall of Fame.

Honors given at the Banquet included Mark Daly with The Tenth Player Award; Paul Bonner as The Comeback Player of the Year; Tri-Rookies-of-the-Year Chris Burke, Andy Doyle and Matt Hallisey. Paul Bonner with the Riley Rocket Award (for the longest bomb allowed by a pitcher during the season); Matt Thayer and Chris Bucci winning team Gold Glove Awards; Jim Flavin collecting The Unsunk Hero Award; and Scott Jamieson capturing the team MVP with an 8-1 mark and a sizzling 0.23 earned run average. Longtime friend and Yawkey League Commissioner Dan Tarpey was ceremoniously presented a team jacket to fittingly close out the awards program. 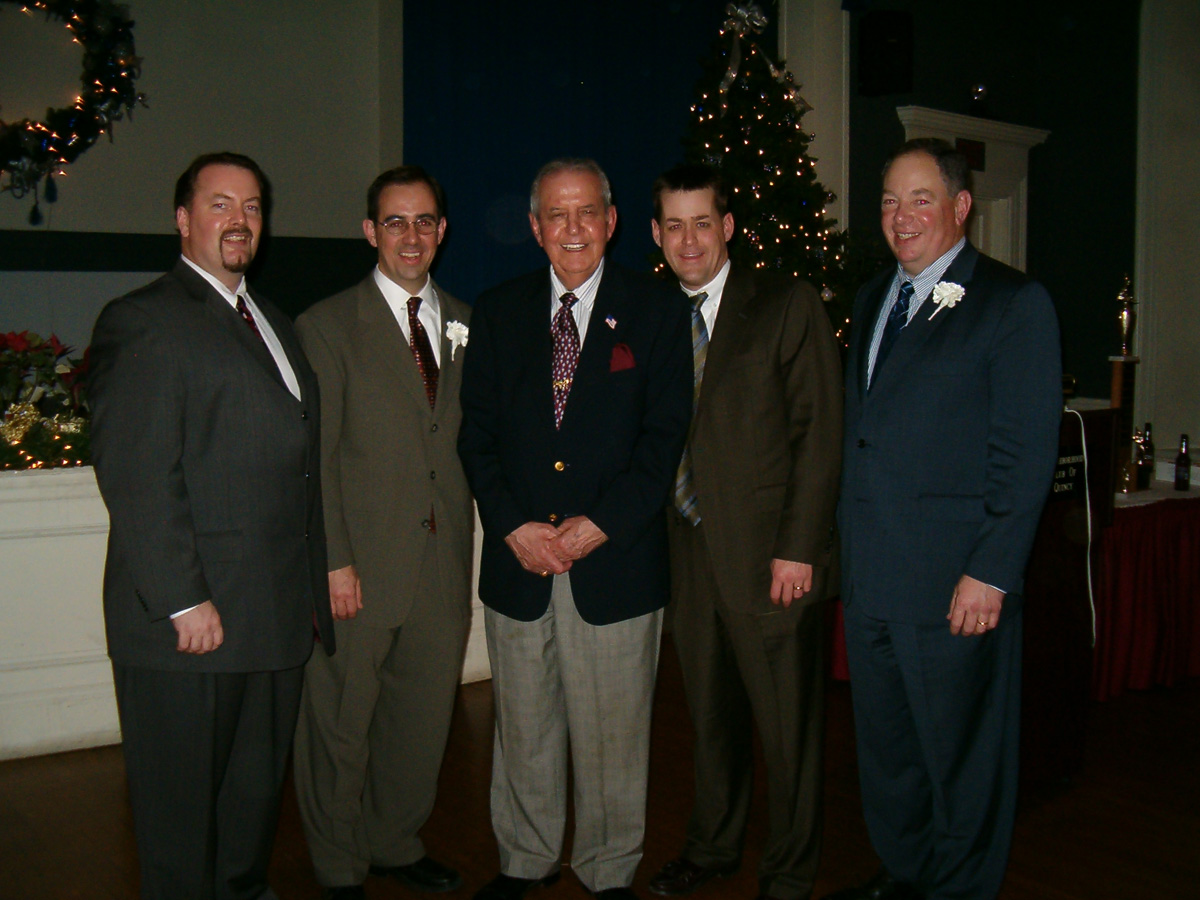