Posted by Adrian Jaime at Oct 4, 2010 5:00PM PDT ( 0 Comments )
more editing options
The North American Race Walking Foundation has a new website.  Click on the above link to check it out.
cancel

“The greatest satisfaction for a coach to receive is for his team to do well in any event and racewalking is not any different,” said South Texas Walking Club Head Coach A.C. Jaime upon returning from California, Virginia and Toronto, Canada Tuesday night. The South Texas Walking Club received many congratulatory E-mails from different college coaches, parents and race walkers for the fact that they had won their 2nd National Championship of the year.

The South Texas Walking Club won its sixth USATF National Junior Olympic Championship last week in Sacramento, California and this week they won their eleven consecutive AAU National Junior Olympic Championship in Norfolk, Virginia. PSJA High school senior Alex Chavez did double duty taking a second place medal at the USA-Canada 10k Junior Racewalk Championship in Toronto, Canada on Friday, flying to Virginia on Saturday and setting a new 3000 meter racewalk AAU Young Men Junior Olympic record on Sunday. Alex put on a tremendous performance as he went around the track seven and one-half times at an unbelievable 1:44 per lap pace to set the new AAU national record of 12:59.89. The old record of 13:15.01 was set by former team member Roberto Vergara of Edinburg who is now attending Lindsey Wilson College in Kentucky on a full scholarship along with his twin brother, Ricardo. Alex will now be aiming for the USATF Youth Record of 12:54.88 set by two time Olympian Kevin Eastler of Maine in 1994. The chances of Alex breaking that record are good since he will still be classified as a youth next year. Alex’s medal was only one of many won this week-end by the club members.

Mariana Juarez who is coached by Hector Rios at North Alamo Elementary School walked an exciting race against twenty of the top nine year olds in the country. She started last at the beginning of her race and gradually worked her way up to the front of the leading pack as is customary for all South Texas Walking Club team members. She was in third place as she was rounding her last turn of her fourth lap but experienced a difficult time getting past Naria Purham of Virginia in second place as she inadvertently blocked her when Mariana was attempting to pass her. Mariana finally went around Naria on her second try with only one hundred meters to the finish line, but still within striking distance of Rebecca Turner of Virginia who had been leading the race since the beginning. Mariana managed to go around Rebecca some twenty feet from the finish line but as she did Rebecca vomited all over her own and Mariana’s shoes but still managed to finish two seconds behind Mariana in second place.

Ten year old Julisa Juarez, also coached by Hector Rios at North Alamo Elementary School, was one of the top summer club runners last year. She did an exceptional feat at the finish line by out pacing Bianca Garza of Palmer Elementary School, last year’s AAU National nine year old gold medalist and record holder. Bianca, who is coached by Art de Hoyes, had been hospitalized and away from practice sessions for more than a month and could not stay up with Julisa through the finish line. The two girls did a remarkable job in taking the lead early in the race along with team members Ivanna Cavasos of North Alamo Elementary School and Bella Pichardo of Bonham Elementary School in McAllen. The four girls finished first, second, fourth and fifth place respectively with only Audry Doby of Pennsylvania working her way into the middle of this pack among the thirty-three girls participating in this race.

Ten year old Jonathon Aguilar, coached by Daniel Rodriguez and Rosie Banda at Freddy Gonzalez Elementary School in Edinburg, worked hard to bring home a gold medal but settled for silver when he could not catch up with Jordan Crawford of Georgia. Jordan started well in front and was fourteen seconds ahead of Jonathon as they completed the first lap. He proved too strong for Jonathon to overcome as he was able to maintain that lead through the finish line.

Twelve year old Crystle Florido coached by Eric Yanes at Carnahan Elementary school in Pharr, Kassandra Rodriguez and Deseri Esperiqueta coached by Edward Martinez  at Bowie Elementary school in Alamo, did very well among the twenty four twelve year old participants. Crystal and Kassandra gradually worked their way up to the lead pack with Crystle taking the lead never to relinquish same. Kassandra was eventually able to get into third place but could not over take Jessica Solomon of Pennsylvania who proved to be a very strong competitor. The two girls looked magnificent coming into the last fifty yards shoulder to shoulder where the outcome was uncertain until Kassandra managed enough strength to outpace Jessica by a mere three hundredths of a second at the finish line.

Thirteen year old Amberly Melendez who was previously coached by Jaime Chavana and fourteen year old High School All-American Geraldo Flores, both of San Juan Middle School, never had any competition to speak of in winning their individual 3000 meters racewalk in practically identical times of 17:14.16 and 17:14.10. Twelve year old Matias Serna, coached by Aaron Gonzalez of Trevino Elementary School in San Juan, told his mother two days before his race that he intended to win a gold medal in Virginia but never dreamed that his Washington D.C flight connection to Norfolk, Virginia would be cancelled at the last minute. Mrs. Serna obtained a rental car at the last minute and drove five hours arriving in Norfolk at midnight thus making it possible for Matias dream of a gold medal to become a reality. The meet announcer made everyone aware that Matias was displaying great racewalking technique as Matias went around all other eighteen competitors with ease to win the race. Jasmine Sanchez also coached by Edward Martinez at Bowie Elementary School had a tough time getting out at the start of the race and more so with the leaders. She went around twenty-five of the competitors but it seemed like an eternity catching up with the front pack. Jasmine was in fifth place some thirty yards behind the third and fourth place girls at the turn of the last lap but managed to outpace those two girls at the finish line to bring home a third place medal.

Newcomer Carlos Ramirez of Liberty Middle School had a difficult time since he only attended four weeks of practice but still managed to win an eleventh place spot. Sixteen year old Diana Lee Flores of PSJA High School, the team’s 2007 National 13 year old champion, did an exceptional job. However, trying to stay up with Maite Moscoso, the USA-Canada meet champion and other top girls proved difficult but Diana still managed to win a 5th place medal.

Congratulations to the all of the athletes with the South Texas Walking Club for putting on a tremendous performance today at the USATF National Jr. Olympic Championships in Sacramento, California!

Julisa and Bianca for earning the GOLD and SILVER medals in the Bantam girls 1500m walk.

Crystal for getting a SILVER MEDAL in the Midget Girls 1500m walk.

There were many great performances today, but Turtle News is just listing the top performers of the day :)

It is that time of the year again.....the Junior Olympics are once again upon us.  The Fighting Turtles are ready to put on a wonderful show once again.  Leading the way will be Amberly Melendez, who at just 12 years old, just walked a 16:51 for 3,000m.

Stay tuned for results here as soon as they become available. 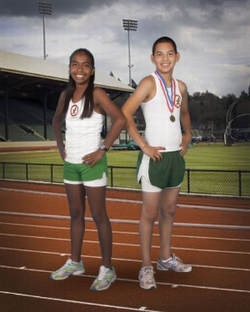