hide
hide
No announcements have been posted yet for San Marin Mustangs Baseball.

Click the above link to view post-game interviews with Coach Whitburn, Kyle Morrow and Matt Testa following San Marin's 8-4 victory over the Arcata Tigers on May 31st.

SAN RAFAEL-- San Marin's Mustangs claimed their fourth NCS title on Saturday with an 8-4 win over Arcata at Albert Park in San Rafael. 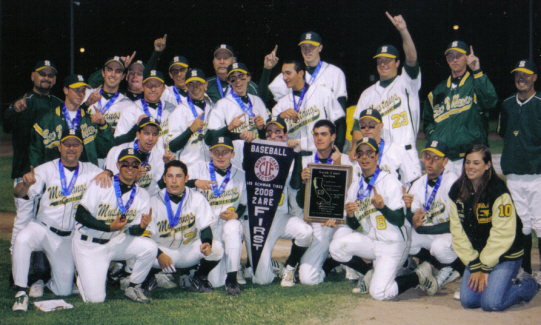 The Mustangs (18-6) took advantage of Drake errors in the first and second inning and got an RBI-single from catcher, Mike Gonzalez to stake the Mustangs to a 3-0 lead, only to hang on to thanks to Testa's gutsy performance.

The Pirates (15-11)  got on the scoreboard in the fifth inning and scored their second run in the sixth. Drake's lead off hitter in the seventh inning was hit by a pitch and advanced to second on a sacrifice bunt. Testa came back to strike out the next hitter and induce a groundball to Kyle Morrow at secondbase to shut the door.

Morrow reached base in all three of his at-bats and scored the game's first run of the night.

Kellen Porter made his return to the starting lineup after missing time since the Spring tournament. Porter went 1 for 3, singling in his first at-bat and scoring what turned to be the game's winning run.

Mike Driscoll added a double for the Mustangs. 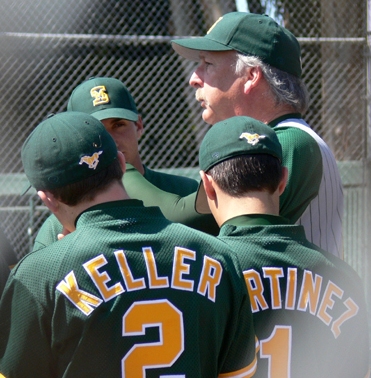 Posted by Brian Andel at May 19, 2007 5:00PM PDT ( 0 Comments )
more editing options
SAN RAFAEL--Dating back to 1991, the Mustangs had played in quite a few MCAL title games but kept coming up short. All that changed when the 2007 team, many of whom were in diapers the last time an MCAL pennant was waved by the green and gold, got the job done with a 3-2 victory over the Drake Pirates on Saturday night at Albert Park. Vinny Pacchetti led the game off with a walk, stole secondbase and moved to third on Vince Ross' single. Ross also stole second, setting up Jimmy Pederson's RBI-ground out. Tyler Taggard sent Ross home moments later with a double down the leftfield line, giving San Marin a 2-0 lead. In the third, San Marin again took advantage of a lead off baserunner as Tony Taylor was hit with a pitch. Taylor advanced to second when Danny Torres laid down a bunt single and later to third, courtesy of a throwing err3or. Jimmy Puccinelli then grounded into a 4-6-3 double play, scoring Taylor. The Mustangs gladly traded the two outs for what later turned out to be the game winning run. Mike Lopez made his first start in several weeks, giving the team a much-needed three innings of work. Lopez struck out four and kept the Pirate bats in check, allowing just one run. Chris Keller returned to form as a solid reliever on this night. The Mustangs win leader gave up a lead off homer in the fourth inning, cutting the score to 3-2, but that was the last run that would cross the plate on this night as Keller turned stingy and the Drake Pirate offense turned quiet. Keller, having thrown a complete game earlier in the week, allowed just two more hits over the next three innings and righted the ship when the Pirates had runners at the corners before striking out the final two outs in the sixth. Entering the seventh inning and Keller having maxed out of innings for the week, Coach Whitburn turned to the league's top closer, Matt Testa, to finish up. Testa didn't disappoint, after collecting the save the night before, Testa was asked to do the same again as he struck out the lead off man, got a fly ball-out to rightfield and finally put Drake away with a ground out to Kellen Porter at firstbase to preserve the 3-2 lead and send the Mustangs home with the pennant. The MCAL Champion, San Marin Mustangs (18-7; 10-6) move on to NCS beginning next week. 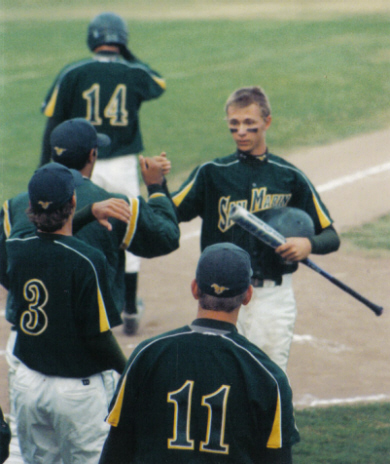