Director, Head Coach A 13 year Air Force Veteran (Training Systems Specialist), Coach Mo began working as a coach in the Phoenix area in 1990 at Luke Air Force base where his 56 Medical Group football teams enjoyed a 40-4 record in 4 years with 4 championship appearances (winning 3). His military training, education & experience and has given him unique and use knowledge in a wide range of areas to include training systems development, nutrition, kinesiology, biomechanics, biolocomotion and astrophysics, giving him a unique perspective in the areas of speed development. As a track coach at Peoria Centennial (91-94), Phoenix Moon Valley (93-98) and Desert Vista (99-2000) high Schools his athletes enjoyed phenomenal success dominating the sprints, jumps & hurdles in their respective regions.

In 1999 Coach Mo's sprinters won every sprint, hurdle & long jump title in the region while he was at Moon Valley (he also tutored sprinters from Apollo, Independence, Cactus & Centennial High Schools). His Lightning Track Club (LTC) trained athletes won nearly every sprint, hurdle & long jump event in the region during his ttenure based out of Moon Valley in the Glendale District. In 1997 & 98, he coached back to back state sprint champs Jamaal Peterson (100m, silver at 200, 4th in the 100HH) and Brandon Bardwell (200m, silver at 400, 4th in the 100m). He was also the receivers & defensive backs coach at Moon (93-94) tutoring 4 all-region selections.

In 2002 Mo also took on Athletic Director duties at the Murphy Field Of Dreams and would soon take over as youth football manager for the Arizona Cardinals. After stints as an Assistant Principal at Career Success and Ahwatukee Horizon Schools, Coach Mo became the Cougars head track & field coach in 2003, coaching the Cougar sprinters, hurdlers & jumpers. During his tenure, the Cougars have had their best showing in 20 years with 90 top 10 finishes and 14 championships in the 2A metro region including second place team finishes in 2003 & 2004. At the state championships, his athletes have had 62 top 10 finishes and three state titles. The boys team was state runner up in 2005. In 2006, PC hurdlers Matt Kredit and Domoneek Staton swept the boys & girls hurdles at the 2A metro region championships. Kredit went on the take third at state.

2005 brought in a who new dimension to Coach Mo's resume as many of the NFL combine's top performers had ties to his speed camps. After two years of working with future NFL draft picks in Shaun McDonald (Rams 4th rounf 2003) and Terrell Suggs (Ravens first round 2004), he teamed up with Brett Fisher. After that his success had a multiplative results in 2005 with Roddy White (first round/Atlanta), JJ Arrington (2nd round round/Arizona), Vince Jackson (second round/San Diego), Kelvin Hayden (Kelvin Hayden 2nd round Indianapolis), Lofa Tatupu (2nd round/Seattle) all being drafted. In all, 12 players with ties to Coach Mo were drafted. In 2006, Manny Lawson was drafted by the 49ers in the first round while Brandon Marshall (Broncos), Stephen Tulloch (Titans) and Darryl Tapp (Seattle) were all selected in the first day and had instant impacts on ther respective teams. All shined brightly at the Indianapolis NFL combine and their home Pro Days.

For testimonials and more on Coach Mo, scroll down on this page. 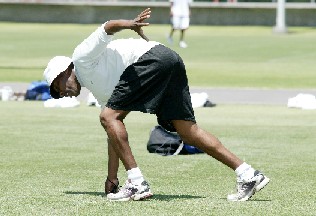