Posted by Dave Rea on Jun 07 2014 at 05:00PM PDT
More editing options
The Jaguars JV Squad will have a new Head Coach in the person of Jon Stahl this season. Jon will be in his sixth season and comes back to the JV after being with the Varsity Squad in 2013. Jon was the Head JV Coach in 2012 and the PW Head Coach for three season prior. Shane Metter, a third year coach, moves up from the Pee Wee Squad for his first year as an Assistant Coach. The third coach is Chris Ricci who will be in his first year coaching with Buckeye Youth Football. We want to welcome Chris to the crew and hope he has a great time coaching these young guys. 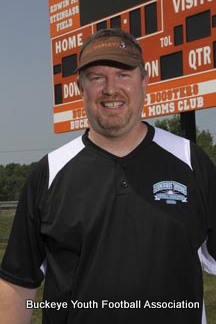