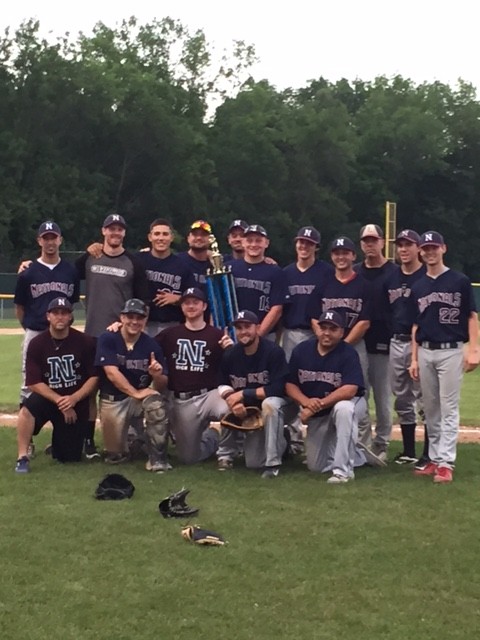 After that, the Nats resume WSL Invitational play with another matchup vs. the A's.  That game will be at 4pm on Saturday in Sheboygan.

Nats Bounce back with Road Win over Oshkosh

The West Allis Nationals ignored a time honored baseball tradition and played on Monday night vs the Giants in Oshkosh.  That's not the first - and won't be the last tradition dishonored by the team.  Nonetheless, they played.

As can be expected after a 90 mile drive, the team's offense was sluggish - not in the sense of power output, but more like fatigued.   However,the team did muster all of two hits and did score the game's only run in downing the Oshkosh Giants 1-0.

When you only score one run, it's helpful to have your pitcher throw a shutout.   So that's what Cody Griebling did - complete game, two infield hits, no walks and 9 strikeouts.

Adam Karas returned from the physically disabled list to knock a double and score the game's lone run.

After the game, impressed by his strong 0-3, reaching on an error and then promptly getting thrown out after convincing himself he is now a base-stealing threat, the Wisconsin Rapids Rafters signed Max Widmar to a one day contract with a team option.    In return the Nationals receive the piece of mind knowing they were beneficiaries of Widmar's impressive output.  In 13 WSL games, Widmar hit .487 with 3 HR's, 15 RBI's and a 1.463 OPS.   When informed that the signing will likely cost him WSL MVP consideration, Widmar replied, "I have good teammates on the Nationals, but my host family in Wisconsin Rapids are my friends."

All seriousness aside, good luck Max.   Say "Hi" to Froh, Jake, Putnam, Deano and the other Nationals who were successful in getting their one day contracts renewed.