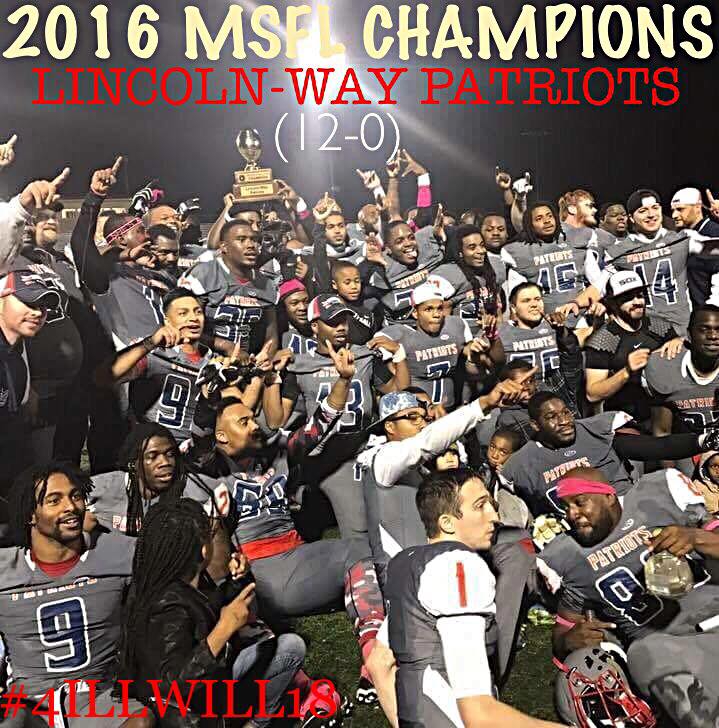 October 4, 2016 – The Lincoln-Way Patriots won their first MSFL Championship with a dominate defensive performance over the Door County Destroyers 31-0 last Saturday night at Hart Park in Wauwatosa, WI. Led on defense by Perry Sanders who stuffed the Destroyer running game and interceptions by each starting defensive back, the Patriots got out to a 24-0 halftime lead. The game, capped off by a long touchdown pass from three-time league MVP Tony Powell to Steve Trudo and a defensive stop inside 2 minutes remaining secured the final outcome.

The Patriots’ first league championship in franchise history proved to be extra sweet with the results from the prior two years, coming so close last year against the Racine Raiders. The mistakes made in the past were not made and this year were forced on the opponent. The Patriots took advantage of those mistakes for their first shutout of the year. Also, team co-founder and inaugural head coach Steve Strimel was inducted into the MSFL Hall of Fame at halftime, the team’s first honoree.

The win culminates a perfect 12-0 season in the MSFL and 13-1 overall. The Patriots move on to post-season play in an attempt to win their first national championship. Future games will be announced at www.lincolnwaypatriots.org when they are finalized.

For more information about the Lincoln-Way Patriots, including tryout and sponsorship opportunities, please email Tyson Roth at tyson@lincolnwaypatriots.org.