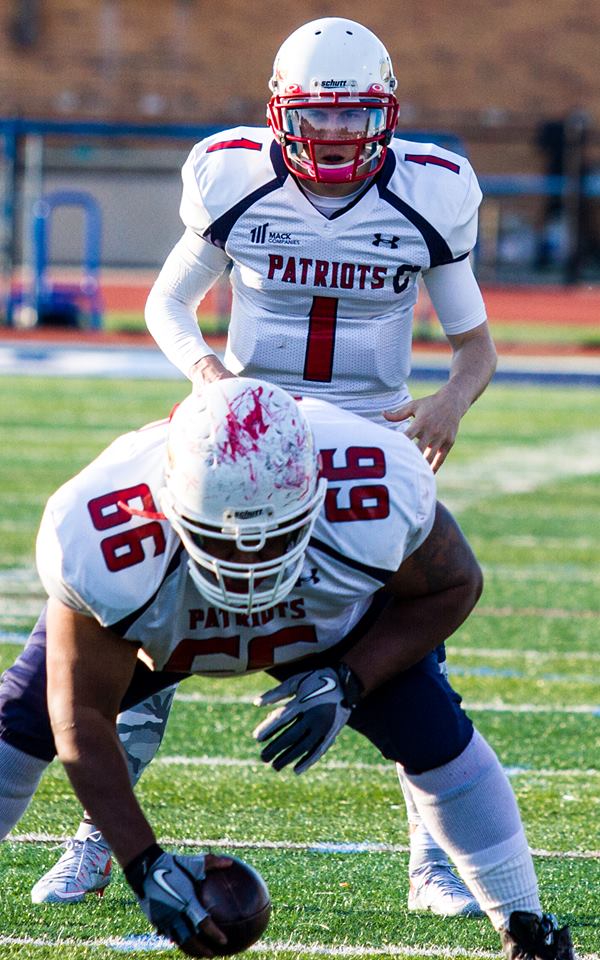 The reigning two-time Most Valuable Player Tony Powell threw for a Mid States Football League record eight touchdown passes against the Quad City Raiders on July 30th. The nifty Quarterback was 16 for 28 with 421 yards, eight touchdowns and no interceptions in the Lincoln-Way Patriots 65-46 victory. In the 17 years of the leagues’ existence, no player has thrown for more than seven touchdowns in a game. Highlights of the record breaking game can be seen here: https://www.youtube.com/watch?v=I8qG5lHUBbc

“ I was just excited that I would have a record in the league” said Powell. Powell’s last touchdown came on a 49-yard jailbreak screen to Lex Jackson to help seal the Patriots victory. “My teammates said they were going to stay in for another possession just so I could get it and that means a lot coming from my teammates,” said Powell.

After the 2015 MSFL season, Powell earned his first professional football contract with the Chicago Blitz of the American Indoor Football League. Powell won his one and only start for the Blitz in the 2016 season before leaving the team to focus with the Patriots. “ I was glad to help out with the Blitz but they were aware of where my heart was, they understood and honored my honesty and wished me well” said Powell about returning to the Patriots this season.

In High school Powell was named 2007 Northwest Times Player of the Year and All State before he graduated in 2008. The journey has not always been easy for the often-labeled undersized 5’11” 170 pound quarterback. When he first joined the Patriots in 2013, his role was much different. “When I first came to the team I played corner, I played about three to four possessions a game” said Powell. It was at this point that the now two time MSFL MVP really found a new love for the game. “I really came for the love of the game. I missed playing in high school so I just wanted to get back out there” said Powell.

While Powell has always performed when called on, he did not even expect what was to come next. “ I did not expect to have the success that I have, but I am truly grateful for it and all my teammates that have even made it possible. The credit belongs to them,” said Powell.

The Lincoln-Way Patriots have been undefeated in regular season play the last two seasons, and continue that streak with a 7-0 record so far this season. The Red and White have outscored their opponents with a margin of 357-145, but that does not mean anything according to their offensive team captain. “We as a whole have everything left to accomplish… we are working hard toward our goal, which is to win a league championship and then play for a national title as well” said Powell.