hide
hide
No announcements have been posted yet for Door 2 Door .

CSSA BOARD MEETING
January 12, 2022
The monthly meeting of the CSSA Board of Directors was held January 12, 2022, at GameDay Grill and called to order by Norm Thiem at 6:28 P.M.
Members Present: Norm Thiem, Ray DeLuca, Maria Burden, Robbie Crider, Leland Brown, Mike Maguire, Dan Bonham, Dewey Hom, Bob Werner, Mike Parson, John Humeston and Dick O’Connor. Misty Diehl, new manager of Sosbee Funeral Home Team was a guest.
Absent: Randy Bergman
A. Minutes of the December 6, 2022 meeting were presented and Board approved.
B. Treasurer/Financial Report: Dan Bonham, Treasurer, is fully set up to assume financial duties. Norm Thiem presented the 2021 Profit and Loss Report, Balance Sheet (P/L will be posted on TeamPages for those interested). Also presented was a first draft of Projected Gain/Loss for 2022. Negative net income for 2021 of $862.28 was due to the advance purchase of softballs for 2022 seasons because of supply chain issues. Dan suggests that a separate bank account be established (no additional bank fees) for the Charity Fund, to simplify reporting. Board approved.
C. Player Fee Payments: It was decided that to make payments easier and the process more efficient and less costly that we would go back to managers collecting payments from their team. Players can pay by cash, check, or credit card but credit card payments will be on a form instead of the on-site card reader used last year. Payments must be made by the end of the first week of play. Players that cannot make the first week need to mail their check to their manager. Players will use a single payment for each team that they play on so that the managers can certify that they have paid. There will be a $5 convenience fee for all credit card payments to help cover the cost charged by the credit card company. These changes are due to staffing issues. Board approved that 2022 registration fees will remain at $50.00 per player per team.
D. Uniforms for 2022 season: the BOD voted to change to sublimated uniforms beginning in 2022. The new uniforms will be substantially more colorful and better quality than our current version.
E. CSSA Video Library was published on January 5th on CSSA’s new YouTube channel. Links and instructions have been posted on TeamPages. Videos for pre-game warmups and stretches will be posted and announced prior to opening day of 2022 season.
F. The Board approved the establishment two new voting positions on the Board of Directors: Special Projects Director is Ray DeLuca and a second Player Rep for Tuesday/Thursday nights will be James Bauch.
G. Tom Cameron is the Board’s CSSA honoree for the CRPA Volunteer of the Year Award for his extraordinary contributions to our organization through the Charity Golf Tournament and much more. Members of the board will be present at the CRPA banquet to honor him.
H. CSSA needs scorekeepers and umpires for the 2022 season. Dick O’Connor reported that he is in the process of securing commitments for the required umpires. Misty Diehl will be added as a scorekeeper trainee, and Anne Ryan will also be a scorekeeper. Additional scorekeepers are needed. The Board approved an increase for scorekeeper pay to $25.00 per game. Previous scorekeeper pay was $20.00 per game.
I. Sponsors: A great deal of hard work went into securing a dedicated group of sponsors for the CSSA. Sponsor longevity benefits the league in many ways; the board discussed ways to increase the benefits of being a sponsor, including popup or semi-permanent banners at Hobgood Park (depending on what is permitted by the facility) with sponsor names, logos, and QR codes for their websites and menus to increase sponsor exposure and patronage. A decision will be made at the next meeting regarding if and how this should be implemented. Sponsor listings on TeamPages will be updated prior to start of season.
J. New Player Orientation Packets: This will be an information packet to be distributed to all new players at Evaluations February 19, 20, 26 and 27. Norm, Stacie and Maria will develop it, including What Happens after Evals, Approved Bat Information, How to Access and Use TeamPages (for stats, schedules, updates, rosters, videos, etc.) and Quirky Rules and Common Mistakes. The Board approved.
K. Rules Update: The Rules Committee will be updating the Rules of Play for approval by the BOD and posting on TeamPages by the 2022 season start, if possible.
The meeting adjourned at 9:05 P.M.
The next BOD meeting will be Monday, February 7, 2022, at Ralphs Tavern, Kennesaw. 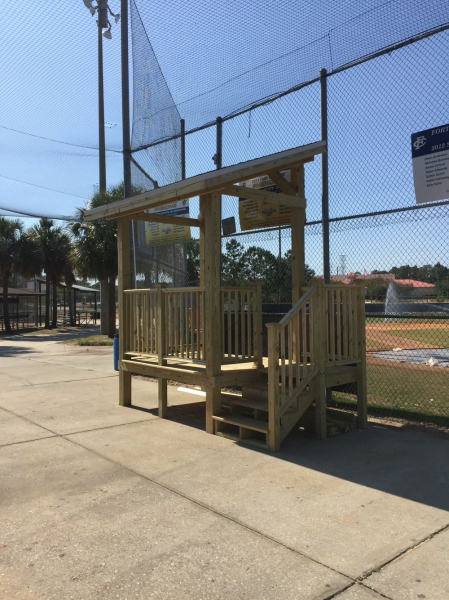 Spring Ball will be starting sooner than one realizes and that brings changes all through the organization at Hobgood Park. Some changes are Adds, Moves and “Retire” to watch games instead of working them.
With this in mind, CSSA is needing full-time and part-time/backup Scorekeepers for Spring 2022 Season. Days involved are Monday and Wednesday mornings, and/or Tuesday nights. The Spring season tentatively starts March 14 and will run for 10 weeks. If interested or you know of someone who would be interested, please contact me at 770-597-8770 (please leave message) or email: faryan.cssa.hobgood@gmail.com. You can also contact Norm Thiem at 770-757-8467 or email: nthiem@aol.com Please put in subject line – Scorekeeper 2022. Thank you 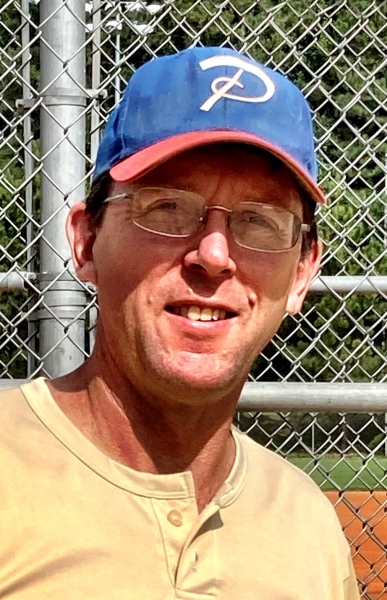 Softball players and enthusiasts understand the importance of a defensive shortstop. Dan Bonham provides that strength and ability to stop those balls hit up the middle, so much so that the Cherokee Senior Softball Association (CSSA) awarded him the co-MVP for leading his team, Long Tire, to the Spring Championship of the Legends Gold League. He also takes part in two additional leagues each week.
He’s only been in the CSSA for four years, but has quickly garnered respect and recognition. He came to softball late in his sports career. He started in Little League baseball, followed by many seasons in regional baseball organizations. Most recently, he participated in an Atlanta metropolitan men’s league.
He grew up moving about the country as a military brat, but it was a stop in Papillon, Nebraska, where he experienced his most memorable moment in sports. In high school, he hadn’t shifted to a full-time shortstop yet. As a pitcher, the right-hander used his accurate and hard-throwing arm to strike out eighteen batters in a game.
However, if you ask Dan to recall his greatest achievement, he will promptly reply it was the day he threw out Dewey Hom at first. As we referenced in a previous story, Dewey is a senior Olympic sprinter, so getting him out on a ground ball is never routine. Dan’s comment displays his light-hearted approach to life and the game he loves.
He was a long-time fan of the Cincinnati Reds and, in particular, Pete Rose. Dan and his family settled in Georgia about twenty-three years ago, where he eventually converted his baseball allegiance to the Atlanta Braves.
Dan acknowledges he could never have devoted as much time to his athletics avocations if not for the patience and support of Camille, his wife of over thirty years.
When Dan’s not on the field, he is often a spectator of the senior softball games at Hobgood Park. The caliber of play from players far into their eighties constantly amazes him, and he hopes good fortune will allow him to compete and have fun for many more years.
The immortal words of Yogi Berra guide him through his daily softball life. “Ninety percent of baseball is half-mental, while the other half is physical.” 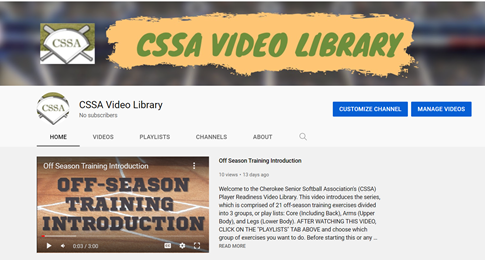 The Spring 2022 season is only a few months away! The Cherokee Senior Softball Association has always placed great importance on player safety in the game setting and has implemented rules, equipment requirements and other measures in support of our mission of safety and fun on the field. Playing softball in our fun and fast-paced league is a great physical and social experience, and one that can take us into our eighties and beyond! But many players experience injuries that take them out of the game or even out for the season.

The most common injuries are hamstring and quad pulls, back and shoulder injuries. Even professional athletes that train full time still injure themselves. But by preparing your body for the upcoming season, you can lower your risk of injury and maybe even improve your performance.

We’re proud to introduce our new* “CSSA Softball Readiness Video Library,”* created by Kent Burden, a player in our league, retired wellness coach, personal trainer, and health and wellness author. His client list included celebrities, NFL, NBA and MLB players. The video library is broken into three sections or PLAYLISTS: core, arm and lower body exercises that require only resistance bands and can be done without a gym membership or any fancy equipment. The video library is set up so you can choose the exercises that best fit your fitness abilities, or you can do them all. It’s up to you.

After watching the introduction video, be sure to click on the PLAYLISTS tab, to see the videos grouped by category for easy-to-follow workouts. Coming soon, in time for the start of our 2022 Spring season, the video library will also include pregame warmup and stretch routines so you can be ready to perform your best and safest at game time.

To check it out, either click on the VIDEO LIBRARY tab in the banner above this article* and follow the link from there, or just click the link below:
https://www.youtube.com/channel/UCcEkVhj4e4KuekBkUvPzYCQ/featured

And here’s a link directly to the PLAYLISTS to see the workouts:

C. Championship shirts will be short sleeve due to unavailability of long sleeve.

D. Video library is still on schedule to be posted on website by the end of January.

E. CSSA Golf Tournament was a very big success. The tournament took in approximately $1488, to add to the total funds which now stand at $6000. The fall tournament helped us surpass $10000 in total earnings for the charity fund. Also, many toys were also received for children’s Christmas.

F. Awards Banquet turned out very well. We received many compliments with no complaints. The 50/50 drawing allowed us to send $250 to CHOA (Children’s Healthcare of Atlanta)…. Thank You !!

G. The BOD has made a motion to institute a new voting and board position. The position would be called ‘Special Projects Director’ which would include, but not limited to sponsorship and banquet direction. Ray DeLuca has been nominated for the position. In order for the measure to pass it must be voted on and passed by the BOD after a 7 day posting on the website.

H. BOD position update for 2022:
1. Treasurer Dan Bonham (formally Brad)
I. An Evaluation Committee of 5 people is to be put in place to conduct the major evaluations and present findings to all of the teams for drafts. The draft will be scheduled for the first week of March.

K. The BOD would like to split the player representative position between 2 people in order for the reps to have more interaction with the players and leagues. They have nominated James Bosch to fill the second position along with Leland Brown. The representatives will share 2 schedules:
1. 2 days – Monday and Wednesday
2. 2 days – Tuesday and Thursday
To be instituted the measure must be voted and passed by the BOD after a 7 day posting on the website.

L. The CRPA Volunteer of the Year award banquet is January 20, 2022. The BOD has presented the CRPA with our nomination.

This will be my last BOD minutes report as the CSSA Secretary. It has been an honor and a pleasure (sometimes… ha ha) over the last 4 years. I already know that Maria will do a great job, and yes, better than me !!! Thanks to everyone.

HAVE A BLESSED CHRISTMAS,
HAPPY HANUKKAH, KWANZAA, AND
A BETTER NEW YEAR