hide
hide
No announcements have been posted yet for Canfield Hockey.

A look at the new uniforms! 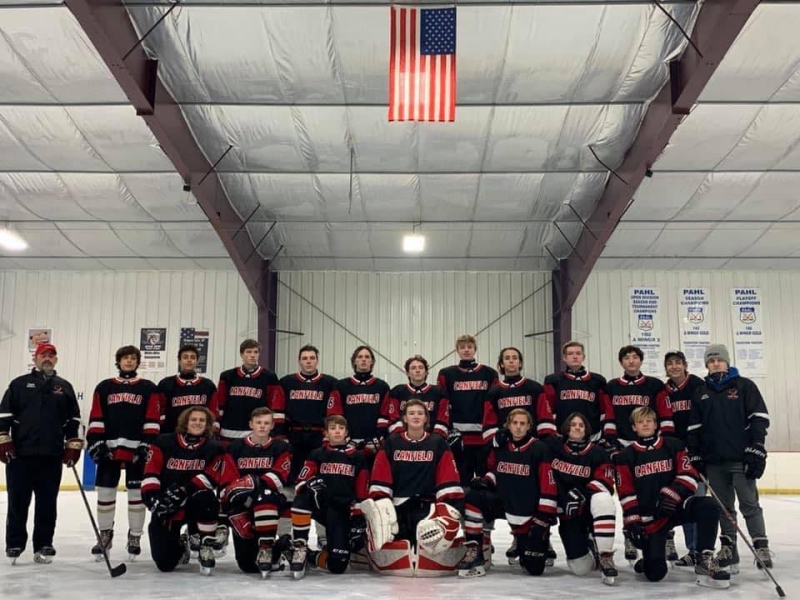 Although we had a few players missing for this photo…it’s a quick look at the new uniforms!

Hello all,
This will be the first year the Canfield High School Varsity Hockey team will have a program at all home games! This full color, very informative program will be handed out at all of our home games!
We need your help selling ad apace in these programs. With the “Till open” being cancelled this year, we lost our major fundraising opportunity so this program is a great way to offset the lost donations to the program.
The letter to send to prospective advertisers and order form is attached. Please distribute to anyone who would like to support Canfield Hockey by advertising their business!

1. The bulk of the meeting revolved around fundraising for the upcoming season. COVID-19 has forced the cancellation of the “Till Open; 4th of July Golf Outing” which was a major fundraiser for our organization. Because of that, new fundraising opportunities need to be found. We have 2 major fundraisers so far:
A. Local Business Gift Card Raffle- 10, $100 gift cards to be raffled the week of June 20th – June 29th. 1 card per day for 10 days. Tickets are $10 each and we have 1,000 to sell which would bring in $10,000. To date, there are only about 100 tickets left unsold an incredible job by all those who have sold tickets! The businesses for the raffle are: Bella Napoli Pizza, Phoenix Fire Bar & Grill, Davidson’s Restaurant, Belleria, El Cowboy, Zenobia, White House fruit Farm, The Needles Nest, GetGo, and Gun Monkey Supplies.
B. A program for all home games. A sample was passed around at the meeting. It will be full of all types of information including the schedule, a roster, a “senior spotlight” section for the 5 seniors and much, much, more. We will sell advertisements in the program for quarter page, half page and full page ads. As well as inside cover sponsors, senior spotlight sponsors, and single line shoutouts for individual players. Ad prices range from $150 for the inside cover, $100 for a full page ad, $50 for a half page and $35 for a quarter page ad. Senior spotlight ads are $50 and shoutouts are $5. The back cover is already sold as well as one of the inside covers for sure. The program will be free to all home team fans but will sell to the away team fans for $1. The plan is to have an away team roster insert for each home game.

2. Some team members have attended a race at the Western Reserve Motorcycle club’s motocross race where they presented the 50/50 raffle to benefit our team. They’ve been invited to attend every race at the club and have a 50/50 raffle each time.

3. A few other fundraisers have been discussed as well. More information on those will be available once more details have been worked out.

4. We welcomed several new players to the team. Most of which are incoming freshmen players so we should be at a full roster of 20 players for the upcoming season.

5. Coach Covelli has an interested sponsor for new jerseys this year. His commitment has been that a full set of new jerseys will have a zero cost to the players.

6. The only change COVID-19 has brought to the locker room (so far) is that each player will be responsible to bring their own water bottle. There will be no more team bottles to share on the bench. Each player should supply their own.

7. A schedule will be posted as soon as it’s available to us but we should count on at least 10 home games this year. Practices will remain the same as last year – 8:45 PM to 9:45 PM Monday & Wednesday at the Deep Freeze. 2 tournaments are planned and we’ll have information on those later but they are Thanksgiving weekend (November 27-29)and Martin Luther King Day Weekend (January 15-18).

8. We have been moved to the “Blue North” division for this season. The teams in our division are: Canfield,Chagrin Falls,Cuyahoga Valley Christian Academy,Lakewood,Mayfield,Nordonia,Normandy and ​​​​​​​Notre Dame-Cathedral Latin. The top 6 teams from the Blue North will combine with the top 2 teams from the Blue South for the Baron Cup playoffs.

9. A preliminary budget was discussed but at this point in the season it is VERY preliminary. Nothing terribly new here except the obvious need for fundraising. You can reach out to Lori Morris for details.

10. Keep an eye on the* Canfield Hockey Boosters Facebook page* for news and notes as well as pictures and updates. Also, watch the Cardinals Hockey website which can be found in the athletics section of the Canfield Highschool website.

INDIANAPOLIS, IN (May 21, 2020) —Measures to reduce the risk of injury for participants and to provide an additional scenario for instant replay usage comprise the prominent components of the 2020-21 high school ice hockey rules changes.

The National Federation of State High School Associations (NFHS) Ice Hockey Rules Committee proposed a total of five rules modifications as a result of its meeting April 27-28, which were all subsequently approved by the NFHS Board of Directors. The committee’s meeting was held in an online format to comply with current health safety guidelines.

“I commend the committee for adapting its meeting to an online format, its continued focus on minimizing risk for players and its overall efforts to support high school hockey,” said Dan Schuster, NFHS director of educational services and liaison to the Ice Hockey Rules Committee.

One of the risk-minimization changes was made to Rule 3-2, through which a more severe penalty may now be assessed to a player wearing skates that are deemed “dangerous.” Previously, a player with dangerous skates was given a warning and an opportunity to return to the game once the issue was corrected. In 2020-21, a first offense will warrant a game misconduct penalty.

Under Rule 7-6-1, a player who strikes an opponent with his or her hand may now receive a major penalty at the discretion of the official. Traditionally, improper hand contact that was not considered to be fighting constituted a minor penalty.

State associations that have authorized an instant replay system during games may now utilize it to review infractions that involve student-athlete ejections. This clause was added to Rule 9-13 as an accompaniment to the pre-existing instant replay situations, which include reviewing goals and undetected goals and determining the correct amount of time on the game clock.

“If a state so chooses to adopt this as part of its replay policy, it will allow review to ensure the correct player is removed in an ejection situation,” Schuster said. “An ejection, in some cases, can be as critical to a game as a goal. This will give state associations the flexibility to review this important moment in a game.”

Risk minimization was also the focus in Rule 7-13-3, where language was added to prohibit a player from moving an opponent’s glove, tooth or mouth protector that has fallen on the ice for the purpose of keeping it from the opponent’s possession. The stick was the only piece of equipment specified within the original version of the rule.

Finally, a subtle change was made to Rule 3-4-2 to clarify the purpose of the throat/neck protector as a “laceration” protector.

According to the 2018-19 NFHS High School Athletics Participation Survey, more than 35,000 boys participate in ice hockey in 1,638 high schools across the country, and more than 9,600 girls participate in the sport in 642 schools.

###
About the National Federation of State High School Associations (NFHS)
The NFHS, based in Indianapolis, Indiana, is the national leadership organization for high school sports and performing arts activities. Since 1920, the NFHS has led the development of education-based interscholastic sports and performing arts activities that help students succeed in their lives. The NFHS sets direction for the future by building awareness and support, improving the participation experience, establishing consistent standards and rules for competition, and helping those who oversee high school sports and activities. The NFHS writes playing rules for 17 sports for boys and girls at the high school level. Through its 50 member state associations and the District of Columbia, the NFHS reaches more than 19,500 high schools and 12 million participants in high school activity programs, including more than 7.9 million in high school sports. As the recognized national authority on interscholastic activity programs, the NFHS conducts national meetings; sanctions interstate events; offers online publications and services for high school coaches and officials; sponsors professional organizations for high school coaches, officials, speech and debate coaches, and music adjudicators; serves as the national source for interscholastic coach training; and serves as a national information resource of interscholastic athletics and activities. For more information, visit the NFHS website at www.nfhs.org.