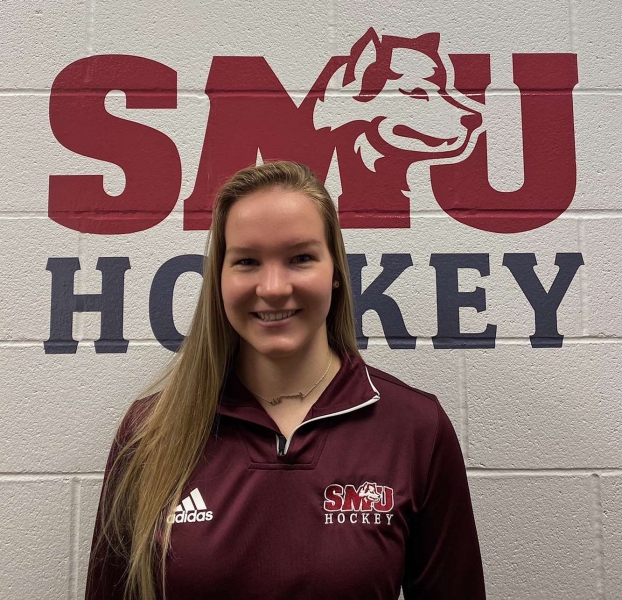 For an 18-year-old rookie blue-liner who wasn’t even supposed to be at Saint Mary’s this season, Maddy McCleary has made an impression with her Huskies teammates and her head coach.

“I’m not sure if it’s right to say this but she’s the stereotypical, low-maintenance, hard-working Prairie girl,” SMU bench boss Chris Larade said. “We’re so lucky to have her and from what I’ve seen she’s just as impressive off the ice and in the classroom. I’m blown away by her maturity.”

The captain of her under-18 AAA team in Swift Current, Sask., last season, McCleary had committed to the University of Lethbridge and was expected to join the Pronghorns in the fall for her freshman year.

But in April, she was notified that the school was eliminating several sports from its budget, including women’s hockey.

“When I found out Lethbridge got cancelled, it was pretty scary,” McCleary recalled. “I thought that was going to be the end of my hockey career.”

Larade, who had recruited McCleary earlier that season, reached out to her and, by May, she committed to Saint Mary’s.
What did she know about SMU?

“I didn’t know Saint Mary’s existed before Chris reached out. It was definitely an eye-opener to come out here but I’m really glad I did.

“It was a real blessing that I got to play here. It felt like home right away and everyone made it inviting.”

With COVID-19 restrictions in place, the transition wasn’t the easiest for someone who had never been to the east coast.

She didn’t even get a chance to tour the south-end Halifax campus when she arrived. Her first two weeks were spent in her apartment.

“When I arrived here, I went straight from the airport to my room and spent two weeks in quarantine,” McCleary explained.

“It was tough, it was really tough. When I first got to my room during Day 1 of quarantine, I was really questioning my decision. As the days went by, I was quick to learn there was a real family-like scenario. The girls were really supportive. They were always in contact but it definitely was a struggle for the first two weeks.

“When your family is 4,000 miles away and being a rookie you really have to rely on the rest of the team and they really stepped up to that role. It’s a real blessing.”

“She came in here and isolated for 14 days and I only got to meet her by delivering food to her apartment,” added Larade, in his 10th season with the Huskies.

“She never complained and always had a smile on her face.”

Perhaps that fortitude was passed down from her father.

Trent McCleary played 192 games in the NHL with the Ottawa Senators, Boston Bruins and Montreal Canadiens. But it was in his 192nd game with Montreal on Jan. 29, 2000, that not only ended his career but he nearly took his life.

During a game at the Bell Centre versus the Philadelphia Flyers, McCleary had skated toward his own blue-line and dropped to the ice to block a Chris Therien slap shot.
The shot caught him in the throat, fracturing his larynx and resulting in a collapsed lung. Losing air, McCleary rushed to the Canadiens’ bench and off the ice where he collapsed. Medical staff had to dislocate his jaw and perform a tracheotomy to open his airway which ultimately saved his life.

McCleary retired from hockey the following fall and became a certified financial planner. He coached Maddy in minor hockey and instilled in her to "play every shift like it’s your last”

“Because you never know what’s around the corner, an injury or what’s happening with COVID right now,” the younger McCleary said.

“He obviously didn’t have the easiest road in hockey. But he’s been an inspiration to have him as a dad and someone to look up to. His style of play is very similar to mine, just go every shift, give your absolute all and play like it’s your last time you’ll ever step on the ice.”
While the pandemic has shut down all Canadian university sports this season, the women’s hockey teams from Saint Mary’s and the Dalhousie Tigers have managed to play a handful of exhibition games under strict safety protocols.

“The atmosphere here is unreal right now,” McCleary said following their game March 13 at the Dauphinee Centre. She scored her first goal in a SMU hockey sweater late in the third period.

“Everyone is so ready to play. It’s been over a year so anything we can get is just a blessing and an honour to play.”

McCleary will return home to southwestern Saskatchewan for the summer and train for what’s hopefully an actual season in 2021-22.

“There better be a season,” she said with a laugh.