hide
hide
No announcements have been posted yet for SWIFT CURRENT WILDCATS.

Wildcats Skating South of the Border 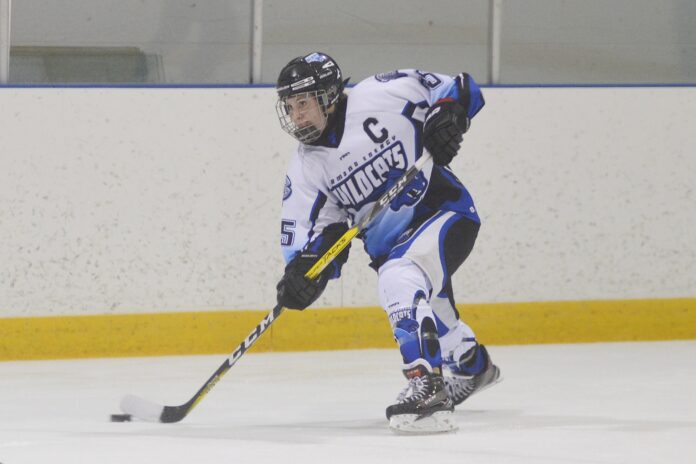 The Raiders are the fifth ranked team in the country and Kirwan leads the team with a plus-12 rating. The Junior defenseman has one goal and three assists in 16 games during her second season at Colgate.

The Raiders will play a home-and-away series against the St. Lawrence University Saints this weekend.

Shaunavon’s Taylor Lind is in the midst of a breakout season with the St. Cloud State Huskies. The 5’7’’ Sophomore forward is third on the team with four goals and tied for the team lead with five assists in 15 games this season.

Lind totalled two goals and six assists in 33 games during her rookie season in 2019-20.

Brownlee’s Alex Gray is currently in her third season with the University of Vermont Catamounts.

Gray has one assist in eight games with the Catamounts this season. She had one assist in 24 games last season after being held without a point in her rookie season.

The Catamounts have a 6-2 record to sit third in the Hockey East Power Index.

Gray skated for the Wildcats for two seasons from 2014-2016 before finishing her minor hockey career with Stanstead College in Quebec.

Moose Jaw’s Crystal Wale is a part of the first women’s ice hockey team at Dakota College at Bottineau. The Ladyjacks have been limited to a couple of games against North Dakota State University due to the pandemic.

Wale played three seasons with the Wildcats from 2017-20.

Wildcats Netminder Off to St. FX

It will be a trek far east for Swift Current Innovation Credit Union Wildcats goaltender Amaya Giraudier later this year to continue her hockey career at the next level.

Late last week the Assiniboia-born goalie committed to St. Francis Xavier University in Nova Scotia for the 2021-22 season and according to the Wildcats alumni page she’s the first player from their organization to join the X-Women program.

“Something definitely exciting, something I’ve always kind of look forward to,” she said. “When I got to come and play AAA midget hockey, it was something that was a great experience for me to move up to and I can’t wait to make that next jump to make U Sport. Play with stronger girls, better shots, and girls who can definitely pick corners. It’s all just gonna make me better.”

The over 4,000-kilometre voyage is a choice the fourth-year Wildcat has been looking to make for some time now.

“I definitely wanted to go far away,” she said. “Playing out east in Canada it’s definitely going to be a really cool experience. Also, playing in Canada, you get to play five years instead of four, which for hockey and women’s hockey there isn’t a whole lot of opportunities, so to play an extra year, that’s something I really look forward to.”

One thing that made finding the right school for fourth-year Wildcat Giraudier tough, was having to endure the process while the COVID-19 pandemic is ongoing which limited her exposure to U Sports and NCAA programs. However, the coaches and program in Antigonish have already helped reassure her she made the right choice.

“Talking to their coaches, they kind of made me feel like it was my best option to go there,” she said. “The girls also seem really nice, I’m already in contact with a few and they seem really friendly out there.”

Giraudier has appeared in 65 games (regular season and playoff combined) for the Wildcats since the start of the 2017-18 season and although this year was cut short, she’s enjoyed playing for Swift Current.

“Playing Wildcats is a great experience for me, definitely got me ready to go off and play CIS,” she said. “I really learned a lot here and the coaches really helped me make that next step to play that next level.”

If everything goes well in school for the 17-year-old she’ll be taking a two-year math and statistics program and then moving onto obtaining a bachelor of education. If that route doesn’t pan out she’s put some thought into attending law school and becoming a lawyer.

Wildcats Johnson Off to Bishop University 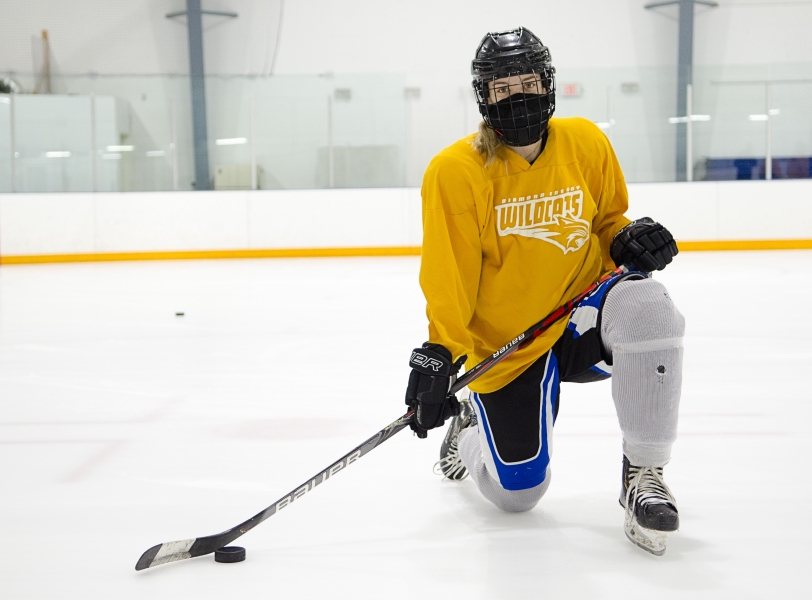 Despite only being able to play five games in her final Saskatchewan Female U18 AAA Hockey League season so far, Kamryn Johnson has found a post-secondary hockey opportunity come the fall.

“This one just kind of seemed like the best fit for me academically, hockey-wise it was a really cool opportunity for me,” she said before practice Wednesday afternoon.

One of the big deciding factors for Johnson in choosing a college or university was to be able to play hockey somewhere north of the 49th parallel.

“There were quite a few schools in the states in the Div 1 ACHA division that were reaching out and I had an offer from a few of those schools,” she said. “A big part of me wanted to stay in Canada, and so that’s what I kind of knew I wanted to do and I was given an opportunity by them to do that, so that was the most exciting thing for me.”

Given the COVID-19 pandemic making it hard for teams at the next level to scout U18 AAA, the fourth-year Wildcat with the help of her father Dan Johnson took it upon themselves to make a video and send it out to a multitude of programs.

“One of the bigger things the coach talked about is he really liked my professionalism when I reached out to them and was talking about the opportunity,” she said. “He liked the way I had a bunch of videos set up and it was very well done, so thanks to my dad for that.”

Aside from the 17-year-olds qualities off the ice, the program took notice of her skills on the ice.

The Gaiters female team just joined the U Sports league in the 2019/20 season, perhaps giving the Swift Current product a better chance at immediate playing time as the program is still in its infancy, but no promises have been made yet.

“A lot of teams for the first year it doesn’t look that promising just because you gotta work your way into a team,” she said. “And even with my first year (with the) Wildcats like you go in and you don’t want to expect a lot of playing time because then you might get your feelings hurt… You just kinda gotta expect that you need to work your way up… So he said there’s room and spots for anyone at this point.”

Away from the hockey aspect, Johnson has been keeping in contact with an academic counsellor and has narrowed down her schooling choices to a biochemistry degree or a pre-med degree.

“A lot of those degrees are four-year degrees, and I’m probably going to stretch those into 5 years and also hockey is five years for the university level (eligibility-wise),” she said. “And if it’s too much I can lower my class load. I think if I have to take three classes a semester to be eligible to play U Sports… I’m there to play hockey, I’m there to go to school so kind of make sure I’m not procrastinating doing other things and try to stay on top of things will be my goal.”

The right-shot defenceman’s dream is to attend med school. 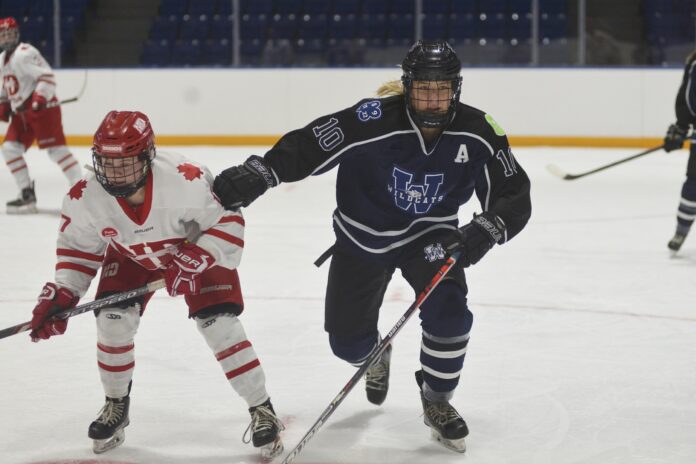 The 5’10’’ homegrown product recently signed a Letter of Intent to join the Bishops University Gaiters for the 2021-22 season. Bishop’s University is an english university located in Sherbrooke, Quebec.

Johnson, 17, is currently in her third season with the Wildcats in the Saskatchewan Female U18 AAA Hockey League. She suited up for four games with the Wildcats in 2017-18 before joining the team full time the following season. She finished with a goal, an assist, and 10 penalty minutes in 28 games in 2018-19. Johnson registered three assists and 30 penalty minutes in 30 games in 2019-20.

“Kamryn is very reliable defensively,” said Wildcats head coach Terry Pavely. “She has made a commitment to making sure she takes care of her defensive responsibilities first. She uses her stick, and her reach, effectively to help her defend. She has a very good shot, becoming an offensive threat in the offensive zone, especially on the powerplay. Kamryn did an excellent job accepting her role as a more defensive defenseman/penalty-killing defenseman in her first two seasons.”

Johnson, who was named an assistant captain this season, was out to an outstanding start to the 2020-21 campaign with two goals and two assists in five games before the season was put on pause due to COVID-19 pandemic.

“She has become more of an offensive threat in her third year. She has more confidence handling the puck, jumping into the play and looking for loose pucks in the offensive zone. She has evolved into a very good leader in her third year and has become more consistent with both her work ethic and execution. She has taken the step that she can be heavily leaned on to play in all situations throughout a game. Her understanding of the game, reading situations and making composed plays under pressure has really grown as a 17 year-old,” said Pavely. 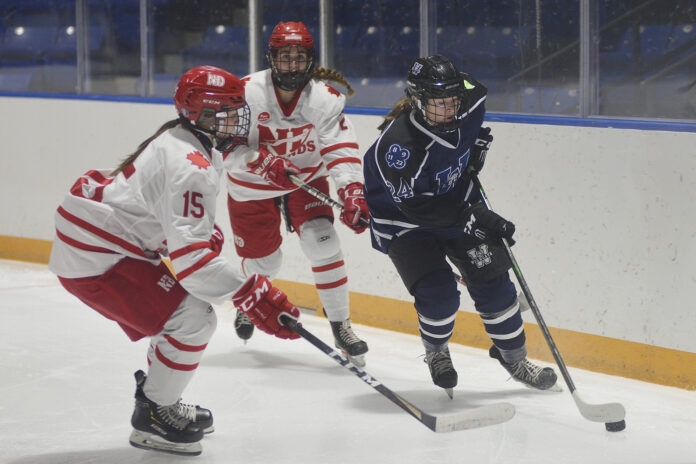 The shorthanded Swift Current Innovation Credit Union Wildcats battled their way to a weekend split with the Notre Dame Hounds in the Saskatchewan Female U18 AAA Hockey League over the weekend.

Saturday, the Wildcats lost 4-2 at home after allowing three unanswered goals in the third period. Special teams played a factor as the Rebels were afforded eight power play opportunities and scored twice, while the Wildcats connected on one of two man-advantages.

Calli Arnold scored twice to give the Wildcats a pair of leads. Baylee Kirwan, Tess Bakus, and Kamryn Johnson all added assists. Amaya Giraudier took the loss with 23 saves on 27 shots.

Kayla Bailey earned the win with 15 saves. Ryann Perrett scored twice for the Hounds, while Amy MacDonald and Emma Thomas also found the back of the net.

Sunday, the Wildcats, still without three regulars, fell behind 2-0 in the first period before scoring five of the final six goals over the last 30:37 of the game in a 5-3 road win to upend the previously unbeaten Hounds.

Captain Baylee Kirwan led the Wildcats with two goals and one assist. Johnson and Ava Metzger registered a goal and an assist each, while Sadie Keller and Arnold each had two-assist outings.

Thomas, Ellie Gauvin, and Olivia Leier replied for the Hounds. Bailey Lindsay made 18 saves in the loss.

The U18 Wildcats will return to action on Dec. 5 when they visit the Weyburn Wings (0-5-0-0). The Wildcats will host the Wings the following day at 4:15 p.m. at the Innovation Credit Union iplex.