By Bruce Hack
Malden, MA– Ryan Noone raced around third toward home plate and a 6-5 win for the Chiefs Friday night at Maplewood (Malden Catholic) to knot the semifinal series with the Lexington Blue Sox at 1-1.

Game three will be Sunday night in Lexington at 8:00 PM.

Lead off hitter Miles Reid started the rally by reaching on a throwing error. Tommy Leone sacrificed Reid to second placing the tying run in scoring position. Noone went the other way and slapped a base hit to left to drive in Reid to even the game at 5-5. An Andrew Caulfield single, his third hit of the game, moved Noone into scoring position and setting up the winning play.

There were only three innings in which runs were scored as the teams scored in the first, fifth and seventh innings. Each time Lexington scored the Chiefs answered.

The Blue Sox scored in the top of first. Gage Gaunt reached on a fielder’s choice. After the second out he went to third on a single by Julian Alvarez. Alex Voitik’s single to left brought home Gaunt for a 1-0 lead.

Reid started off the bottom of the first with a single. He moved to second on a walk to Nate Witkowski. Following the first out, Caulfield singled and Reid scored on a throwing error.

Lexington took the lead for the third time in the top of seventh. Gaunt doubled to left with one out to start the rally. Hall bounced what appeared to be a routine ground out only to see the throw sail over the first baseman and allow Gaunt to score for a 5-4 lead.

Jonathan Richard (1-0) started for the Chiefs and went the distance, the fourth complete game for the Chiefs in the playoffs. He gave up only four hits, but walked six of which only one scored, and struck out seven in his 124 pitch outing.

The cleanup hitters for each team showed why that occupy that spot in the batting order. The Blue Sox Alvarez had two hits, walked twice and three RBI on his home run. The Chiefs Caulfield had his own three-run home run and added two singles. Reid set the table for the Chiefs reaching base three times and scoring each time. Noone had two hits, scored twice and drove in a run.

Pat McGowan started for Lexington and pitched 5.1 innings giving up five hits, four runs, three earned, walked three and struck out. Borja Jones-Berasaluce came in in the sixth and recorded the last two outs. Manny Delcarmen entered the game in the seventh and suffered his first loss in a Blue Sox uniform.

The teams will meet for game three Sunday night. This is the seventh time in 10 playoff series between the two rivals that the series has gone the distance. The previous six were all in the finals (best of 5) from 2011 to 2016.

By Bruce Hack
Lexington, MA- Ryan O’Rourke executed a perfect bunt as John Fritz raced across home plate with the go-ahead run to give Lexington a 3-2 lead and send the Blue Sox on to a game one victory in their semifinal series against the Andre Chiefs.

Game two is scheduled for tonight (Friday) with a 7:45 PM start at Maplewood (Malden Catholic).

The bottom of the sixth started with a single by Alex Voitik, who was pinch-run for by Fritz. Fritz stole second and Dahiandy Johnson walked. Will Potdevin sacrificed to move both runners into scoring position and set up the game-winning scenario.

Lexington scored in the bottom of the first. Josue Feliciano began the inning with a single to center. Feliciano was forced at second and Alex Krylov reaching on a fielders choice. Krylov stole second and Luke Hall walked. Krylov and Hall stole second and third putting two runners into scoring position. Voitik grounded out to second with Krylov scoring.

The Chiefs answered in the top of second. With one out Kyle DeRoma walked, moved to second on a wild pitch and reached third on a fielders choice. From there he scored on a sacrifice fly by Nick Valdario for a 1-1 game.

Lexington retook the lead in the bottom of the second. The Sox loaded the bases on a walk to Potdevin, single by O’Rourke, who pitches and hits for the Blue Sox, and a walk to Brendan Jones. Feliciano reached on a fielders choice with Potdevin scoring for a 2-1 lead.

For the third straight inning a team scored has the Chiefs tied the game in the top of the third. Nate Witkowski reached on a fielding error. He moved to second on a single by Ryan Noone. After two strikeouts, Adam Johnson singled to drive in Witkowski and tie the game at 2-2.

Both starters, the Chiefs Cal Carroll and Lexington’s O’Rourke settled down after the third. Carroll retired nine of 11 Sox batters, five on strikeouts, from the third through fifth innings. O’Rourke got out of a first and third with one out threat in the first by striking out Andrew Caulfield and Graham Smith. From the fourth through sixth innings he set down eight
straight and nine of the last 10 batters he faced.

With the Sox up 3-2 Manny Delcarmen came in to pitch the seventh and set down the Chiefs on six pitches. He combined with O’Rourke to retire 12 of the last 13 Chiefs batters.

O’Rourke finished with eight strikeouts and earned his first postseason win with the Blue Sox.
Johnson and Noone each had two hits for the Chiefs.

To watch the Lexington-Andre series go to Beyond Sight Sports on You Tube and find the game. You can watch game one or watch game two live. 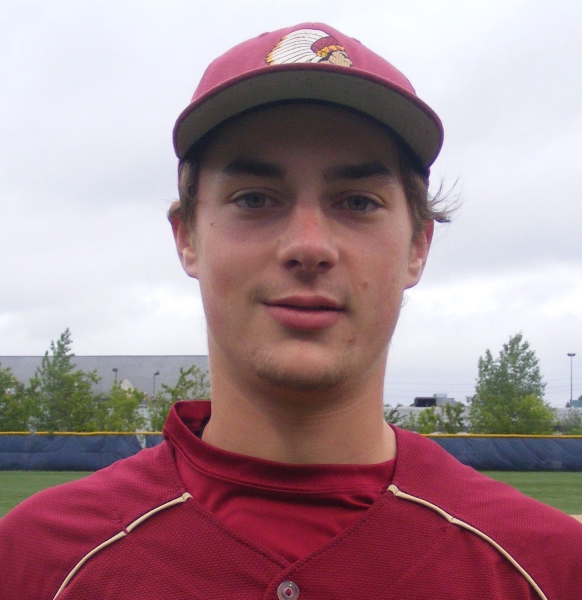 Chiefs Eliminate Alibrandis 13-1, Move on to Semifinals at Lexington on Thursday at 8:00 PM

The Chiefs made a five run first inning stand up.

With the win, the Chiefs move on to meet the #4 seeded Alibrandis at Lexington High on Wednesday night at 8:15 PM in a single elimination second play-in game.

The winner of the Chiefs-Alibrandis game will move on to meet the #1 seeded Blue Sox in the first game of a best of three semi-final series starting Thursday at 8:00 PM in Lexington.