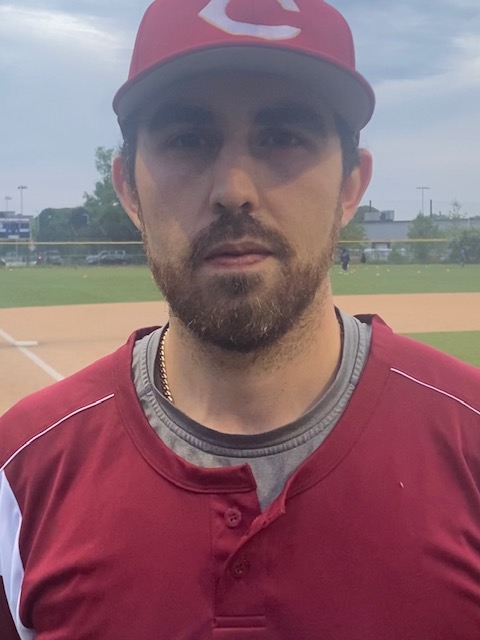 Wednesday’s game vs. Reading and Thursday’s game at Alibrandis were both postponed. Make -up dates will be announced soon.

Chiefs’ Manager Jim McConville (pictured) has the club at 4-4 heading into the six day hiatus. The Chiefs will resume play on Wednesday, July 7 when they travel to Morelli Field to meet the Melrose Americans at 7:30 PM. On Thursday they will stay on the road and visit the Blue Sox in Lexington at 8:00 PM.

Mitch Schroeder and Nick Valdario have been the Chiefs’ leading hitters over the first eight games of the season. Schroeder is currently batting .444 with a homer and four extra base hits. Valdario checks in at .367 (11-30) with four RBI’s and four stolen bases.

In the pitching department, Graham Seed (2-0) and Silas Reed (2-0) own the teams wins. Seed has posted an ERA of 0.54 and has struck out 26 batters in 13 innings. Reed boasts an ERA of 0.88 with 19 K’s in just eight innings of work. Pitching Coach Dave Caiazzo has his staff averaging 1.68 strikeouts per inning.

The Chiefs will face a busy last three weeks of July with 16 games scheduled in 24 days.

The now 4-4 Chiefs are off until Wednesday when they will host the Reading Bulldogs at Maplewood at 8:15 PM.

(Courtesy of Bruce Hack)
Malden, MA – Lexington scored five runs in the fourth to break open a 4-0 game and defeated the Chiefs 9-3 in a game played at Maplewood last night. The game was called at 10:30 in the bottom of the seventh when the lights went out. The Chiefs had scored twice and had runners on the corners with one out when the game was called.

Will Potdevin capped off the fourth with a three-run inside-the-park homer, his first and the teams first of 2021, to give the Sox a 9-0 lead.

Julian Alvarez was 3-for-3 with two RBI and Josue Feliciano was 2-for-2 with a walk and three runs to lead the Blue Sox.

Ryan Noone, who pinch hit in the fifth, drove in two runs for the Chiefs. His two-out single in the fifth drove in Graham Smith to break up the shutout bid. In the seventh He doubled to score Nick Valdario with the last run of the night. 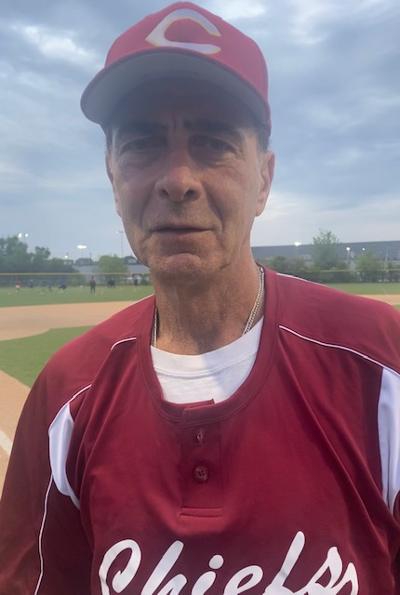 Some things in sports are just unimaginable.

The Intercity League’s version of the “unimaginable” occurred earlier this month when Augustine’s A’s legend and ICL Hall of Famer Dave Caiazzo switched sides of the Fellsway to become the pitching coach of the Chiefs.

Caiazzo was a major part of one of the most competitive ICL’s rivalries of all time in the 1970’s & 1980’s, except he was the cornerstone of the A’s pitching staff that traditionally battled the then Hosmer Chiefs for ICL supremacy.

With few college leagues around in those years, and minus the Red Sox being on television each night, the Chiefs-A’s rivalry drew thousands of fans to both Devir and Playstead Parks to watch the area’s finest semi-professional ballplayers ply their trade. Chiefs-A’s games were front page fodder for local newspapers and Caiazzo was one of the flagbearers for the A’s franchise.

That all changed this past spring when Caiazzo donned the Chiefs’ colors and became the mentor of the pitching staff that he battled for over a decade.

“It took us almost half a century, but we finally got Cai in the right colors,” said Chiefs’ owner and former pitcher and longtime manager Chuck Andre. “Dave and I became good friends in the years when the Chiefs-A’s battles were raging and we’ve maintained that friendship ever since”, added Andre. “With a young pitching staff coming in we needed a great mentor, and who better than Dave Caiazzo, so Jim McConville (new Chiefs’ manager) and I reached out to him to gauge his interest and he thankfully accepted,” said Andre.

Caiazzo’s long and storied pitching career began in earnest during his days at Malden High in the early 1970’s. He once struck out twenty batters in a game versus Everett in 1972 and went on to become the Golden Tornado’s first Hall of Fame inductee.

Following his high school career, he spent two seasons pitching at Mass Bay Community College where he earned Junior College All-America honors. He moved on from Mass Bay and spent his final two college seasons pitching for the University of New Haven. Caiazzo had an incredible All-American career at New Haven, going a combined 22-2 on the mound while winning the opening game of the 1977 College World Series for his legendary coach Frank “Porky” Vieira. He was inducted into the New Haven Hall of Fame in 1988.

In 1978, Caiazzo signed with the Philadelphia Phillies.

Following his playing career Dave stayed active in baseball. He ran the Greater Boston Baseball Camp for almost three decades, served as the pitching coach at MIT for seven years, and also had coaching stints at both Bridgeport University and his alma matter New Haven.

In later years Caiazzo served as a pro scout for both the Cleveland Indians and the Anaheim and Los Angeles Angels. In fact, in 1997 he was the scout that signed then Chiefs’ star Justin Crisafulli to a pro contract with the Indians.

As accomplished off the field, Caiazzo authored the popular book, “_Life Tried to Throw Me a Curveball: I Overcame Diabetes to Become a Pro’._ The book highlights Caiazzo’s struggles with diabetes and his overcoming them to enjoy a remarkable career in baseball.

Caiazzo’s influence is apparently paying early dividends for the Chiefs’ pitching staff. Through the first six games of the season, his staff has amassed a 4-2 record and have struck out 76 batters in just 43 innings.

MALDEN, MA- Nick Valdario went 3 for 5, with a triple and three RBI’s, to lead the Chiefs to a 9-7 win over the Malden Maddogs at Maplewood on Thursday night.

Mitch Schroeder and Brendan Albert each hit a solo homer for the Chiefs.

Silas Reed (2-0) picked up the win, striking out six in two innings, in relief of starter Graham Seed who worked a perfect three innings.

Logan Gillis had two of the Maddogs seven hits.

With the win the Chiefs move to 4-2 on the year. They are now off until Wednesday when they will host the Lexington Blue Sox at Maplewood at 8:15 PM.