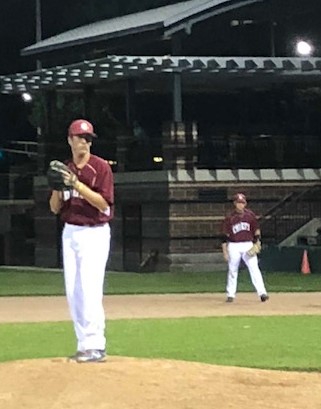 Watertown, MA- Alibrandis scored four runs in the bottom of the fifth inning and went on to beat the Chiefs 6-2 on Tuesday night at Victory Field. It was the Chiefs second loss in as many nights as they saw their record fall to 7-4 on the season.

Second year righty Jack Fargo (pictured) kept the Chiefs in the game over the first four frames. The only run he allowed over that span was of the unearned variety in the bottom of the fourth. The depleted Chiefs offense was unable to provide him any support.

Fargo was relived by David Kerns after walking Juan Parra leading off the Alibrandis four run fifth. A Dave Lightbody double and a Mark Addesa single against Kerns gave the hosts a 5-0 lead.

The Chiefs cut the lead to 5-1 on Brian Bessler’s RBI double in the top of the sixth, scoring Manny Cabral who had singled. Alibrandis got that run right back in the bottom of the inning on Teddy Dziuba’s RBI groundout. They inched a bit closer in the seventh when R.J. Libby drilled his first homer of the year to right with two outs to account for the 6-2 final.

Libby and Bessler both ended up with two hits on the night as the Chiefs outhit Alibrandis 7-6 in the loss.

Chiefs Chatter.… The ICL’s annual Fourth of July Break begins today. The Chiefs return to action next Monday when they travel to Lexington to meet the Blue Sox at 8:00 PM….