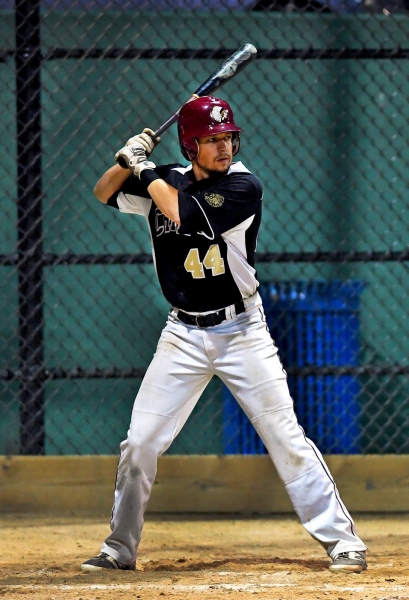 Malden, MA-- Zak Levine threw 5.1 innings of one run baseball and Ricky Alexy’s solo homer, along with Jared Beniers two RBI triple, were the big blows when the Malden Maddogs held off the Chiefs 6-4 at Maplewood on Monday night.

The Maddogs jumped out to 5-0 lead in the top of the third inning against starter Jack Fargo before Mike Burgoyne’s RBI single, scoring Andrew Caulfield who had doubled, cut the lead to 5-1.

The Maddogs added another run off reliever Harry Welch that increased the margin to 6-1 in the top of the sixth.

A Nate Witkowski (pictured) bases clearing double in the bottom of the seventh cut the Malden lead to 6-4. When Steve Passatempo drew a two out walk, the Chiefs suddenly had the winning run at the plate. The comeback try fell short when Elias Fhagen-Smith secured Malden’s second straight win with a strikeout.

Levine (1-0) surrendered just four hits while striking out five. Fargo threw 71 pitches in just 2.2 innings and was charged with five earned runs. He experienced control issues in his first appearance of the year, walking seven while striking out two and allowing three hits. Michael Nestor worked a hitless 1.1 innings while Harry Welch gave up a hit and a run in his two innings. Ben Waldrip completed the Chiefs’ pitching ledger when he struck out two in a scoreless seventh.

With the loss the Chiefs fall to 3-1 on the season.