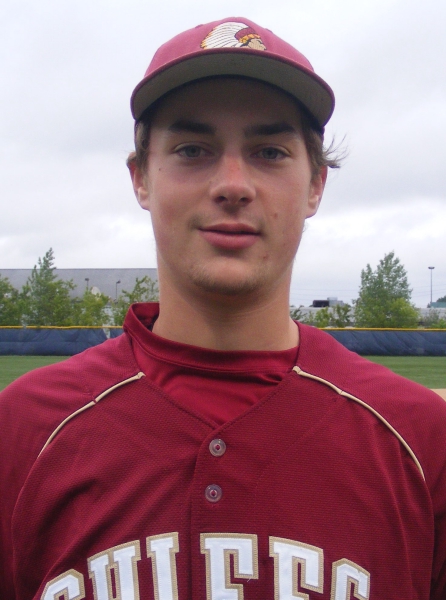 Malden, MA- Evan Walsh went six solid innings, allowing just four hits and striking out 10, to lead the Chiefs to a 3-2 comeback win over the Reading Bulldogs at Maplewood on Wednesday night. For the Chiefs it was their third win in a row as they open the season at 3-0.

Reading got all of the runs they would get against Walsh in the top of the first inning on singles from Darren Hartwell and Tyler Cedone and a two RBI double by catcher Brendan McDonald.

The Chiefs rung out four hits and tossed up a three-spot in the bottom of the third against Jack Wallace who had faced just six hitters over the first two innings. Singles from Michael Nestor, Tony Serino, Steve Passatempo and Kyle Dembrowski put the Chiefs in front 3-2 and closed the scoring for the night.

Righty David Kerns came on for Walsh in the seventh and picked up his second save of the year. The Bridgewater State closer stranded the tying run at second after Chris Webster doubled with two outs.

Wallace (0-1) took the loss for Reading. He went four innings, allowing three runs on four hits, stuck out seven and walked none. Max Mardany and Alex Mandrus each worked a scoreless inning for the Bulldogs in the fifth and sixth.

Chiefs Chants…..Nestor’s hit in the bottom of the third inning was the first of his ICL career. The rookie is the son of Medford High Head Coach and former ICL standout Mike Nestor…..University of Bridgeport infielder Alex Martinez made his debut at shortstop for the Chiefs….The Chiefs are now off until Monday evening when they will host the Malden Maddogs at Maplewood. Next Wednesday the defending champion Lexington Blue Sox come to town. Both games will start at 8:00 PM……