Senior Night... A stunning evening for the last home game for our 4 Seniors Maggie Loyet, Tori Lettus, Sara Taketa and Bailey Hicks, the Lady Falcons battled against a Bothell team that simply was ready to win for the first time in the past 10 matchups over 5 years.

We hit the ball and hit it hard but just didn't find much green.  Maggie and Nicole Shavlik were the bright light of the evening with a couple of nice singles each.  Nicole was able to stretch hers to second base with some crafty base running.

Afterwards all of the Juniors, Sophomores and Freshmen gave the Seniors gifts and told stories.  Lots of laughs and some tears.  They will be sorely missed.  They were part of the magical State Championship of 2012 and will take that with them and enjoy how that gets better with age.

On to Ballard today and then finishing up at Redmond on Wednesday then KingCo Playoffs! 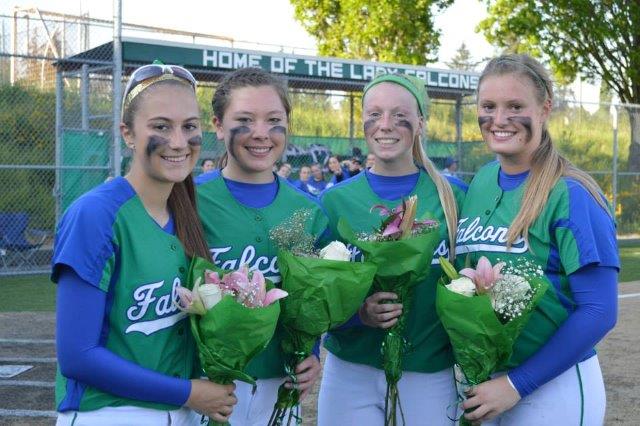 Woodinville Holds on For 7-6 Win Against Inglemoor

Inglemoor jumped out to an early lead off the first of two home runs by Inglemoor's Izzy Riddle last night at their house before the Lady Falcons answered back with a two out, two run double by Olivia Riener in the second inning to put them up for good for the game.

Though the Lady Falcons would put up more in the third inning behind Sara Taketa's RBI single up the middle to get one and a home run by Alyssa O'Farrell in the top of the 7th to go along with 3 more hits by Nicole Shavlik and Sara to score 3 more.  That put the Lady Falcons up 7-2 at the time and fought off a valiant comeback by the Vikings in the bottom of the 7th to score 4 to bring it to within a run at 7-6.   Olivia was able to get the final batter to pop out to Jordan Boyd behind the plate.

Olivia was strong on the mound again going the distance and going right after each batter knowing she has the defense behind her with great stops up the middle by Tori Lettus and Taylor Rhinehart.  She gave up 11 hits but struck out 3 only walking one batter. 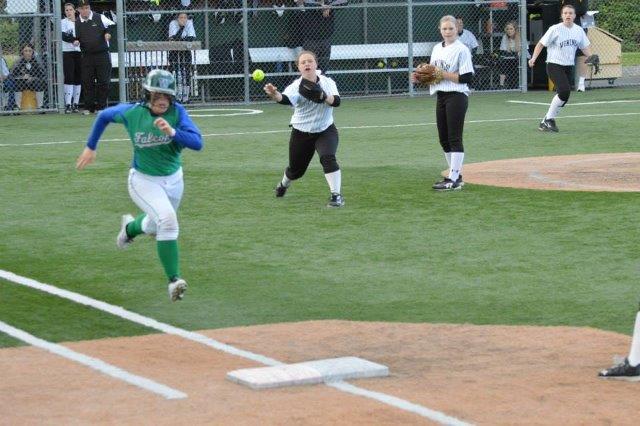 Always a fun night for everyone and this time Ray Lettus put on a great time for the Parents and the girls.  Our Lady Falcons didn't disappoint either with a 16-1, 5 inning run-rule over Roosevelt that saw a number of our JV girls getting into the action for the Varsity game.

Katheryn Hatlen was on the mound and started out fast only giving up 3 hits and 1 run.  Offensively we were led by Nicole Shavlik with two hits and three JV girls Paige Grover, Rochelle Taicz and Gina Wyner all with two hits each and of whom I believe we will see a lot of next year with the way they played both offense and defense and helped carry on the winning ways of Woodinville.

After the game we had parent/player pictures and an inaugural make-a-wish balloon release.  Great time with the families remembering all that is required to play this game at a high level and still have fun doing so! 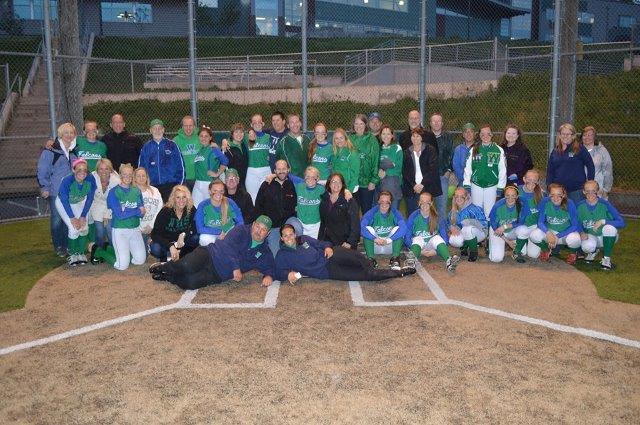 Our Lady Falcons took on the cross town rivals, Bothell. This was a more competitive game through the first 3 innings before the Woodinville bats started an all out blow up. Lauren had 13 K's in the game. Congratulations to Paige and Meg on their Home Runs! Final score 18 - 2.

Back at home vs Eastlake last night our fans were treated to some kind of offensive outburst by both teams.  The difference was the defense in the end after our Lady Falcons put up 12 runs on 14 hits while Eastlake was only able to muster 4 runs on 10 hits even with an uncharacteristic 4 errors by our girls early in the game.

The top of the first was a little shaky as we gave them 3 runs on some hits and errors.  It looked like we might slip back into one of those holes that are hard to hit our way out of.  Though in the bottom of the first Alyssa O'Farrell hit the first of what would be two homeruns of the night for her to bring us within two after one.

Olivia Riener shut down Eastlake in the top of the second with some good pitching and starting an inning ending double play doing her best Percy Harvin over the shoulder catch then over to Alyssa !

Woodinvilles at bat in the bottom of the second started out with a smoked hit by Jordyn Boyd, a Bailey Hicks walk followed with a Maggie Loyet hit.  Nicole Shavlik picks up an RBI with a nice hit as does Alena Jones so we are tied 3-3.  Alyssa drives in two more RBI's with a single to left scoring Maggie and Nicole and we are out of the hole and off to the races up 5-3.

In the fourth Nicole led off with the 2nd of 3 hits for the evening and Alena moved her over with a nice sac bunt.  Alyssa then came up and launched her 2nd home run of the evening to put our Lady Falcons up 7-4.  Then after a hit by Katheryn Hatlen and some crafty base running, Jordan came up and smoked a line drive double over the Eastlake left fielder to make it 8-4.

Maggie and Nicole lead off the 5th with hits and Alena drives in an RBI with a nice piece of hitting to the right side for a fielders choice.   Alyssa then gets her 6th RBI of the night driving in Nicole with a line drive single up the middle.  Katheryn walked and Olivia gets into the action on the offensive side of things with a 2 RBI triple down the right field line.  When the 5th was all said and done were were up 12-4 riding the run-away train.

In the sixth inning Olivia went right at Eastlake as they continued to spray balls all over the field.  Alyssa made a diving catch at first base to snag a sure base hit and good glove work by Tori Lettus.   The last Eastlake batter was sat down looking on a nice outside pitch by Olivia in the 7th.

Juanita on Thursday at 4pm at WHS. 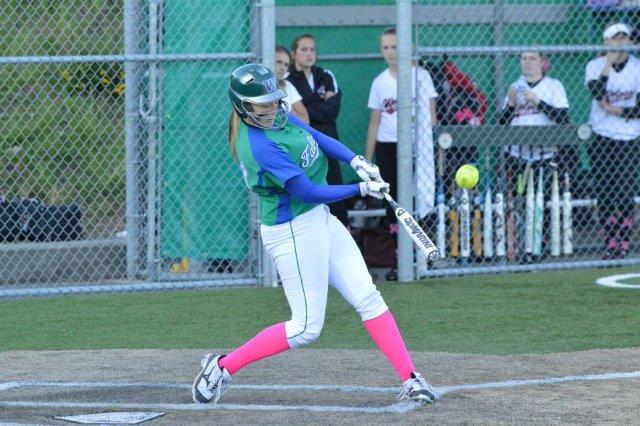