Today was the day for High Schoolers to make scholastic commitments to the colleges of their choice.   Spotswood High School's Will Beard has signed his binding scholarship offer from Rutgers University and is a coveted addition to an outstanding Class of 2007 for R.U.  This class will undoubtedly be ranked by national baseball publications once completed, and Beard is ecstatic about the opportunity to play Big East baseball at the next level.

For the upcoming varsity season, Beard's 4th as a Charger, he will look to re-establish the career victory mark as well as lead the Chargers back to the Central Jersey Final where he and his teammates hope to capture the schools 1st sectional title.  With 1 GMC Tournament win, Will Beard will also become the SHS all-time leader for tournament victories on the mound.  His scholarship is simply a reward for his hard work and dedication to the sport of baseball.

Congratulations to Will Beard and his family on this tremendous accomplishment. 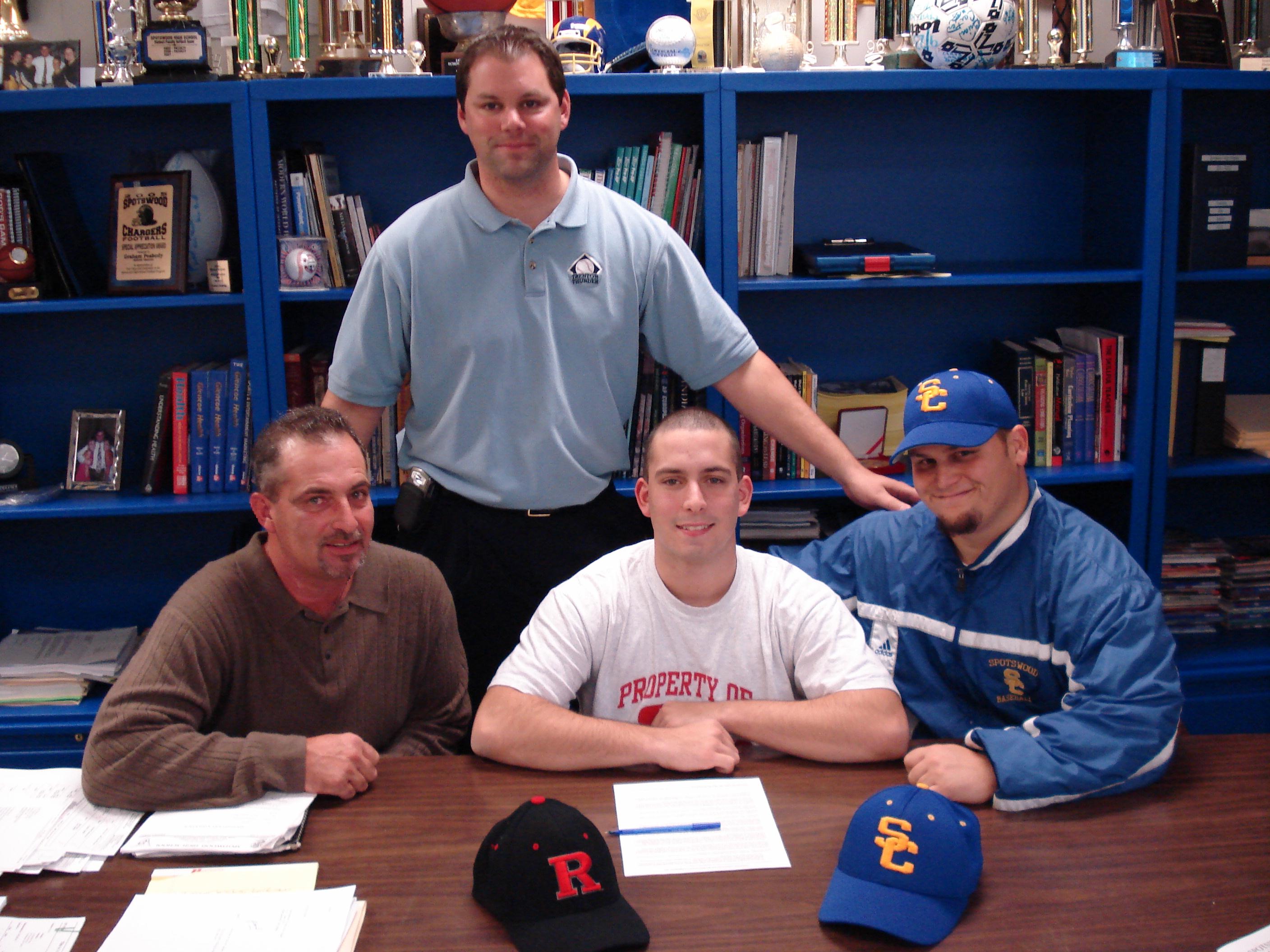 The Greater Middlesex Conference Tournament began play in 1986 with the inception of the Conference itself.  It was a closed 16 team tournament for the 1st 8 years of its existence until 1994, when it became open to all 30 GMC Baseball schools.  Before its' first year, Spotswood High School participated in the Middlesex County Coaches Tournament from 1978 until 1985 as a member of the Colonial Valley Conference.

Here is a look at the year-by-year results for SHS in the GMC Tournament, beginning with the Chargers' first appearence in 1994:

BEARD TO BE A SCARLET KNIGHT

Posted by Glenn Fredricks at Sep 20, 2006 5:00PM PDT ( 0 Comments )
more editing options
MAKES NONBINDING AGREEMENT TO PLAY BASEBALL CHARGERS' BEARD RUTGERS BOUND By GREG TUFARO STAFF WRITER gtufaro@thnt.com Willie Beard, the Greater Middlesex Conference's 2006 Blue Division Player of the Year, has made a nonbinding commitment to attend Rutgers University, Spotswood High School baseball coach Glenn Fredricks announced yesterday. Beard compiled an 8-2 record with a 1.94 ERA a year ago. He struck out 92 batters and walked just 25 while leading the Chargers to their fourth straight division championship last season. The senior right-hander had an outstanding offseason, leading Milltown's Senior American Legion team to a second consecutive state tournament berth and helping the Jack Cust Super 17 All-Star team win the Don Mattingly AABC 17-and-under World Series. It was during the latter event that Beard got the attention of college coaches, according to Fredricks, who said his star pitcher received scholarship offers from ACC and SEC schools. "Willie really made a name for himself this summer," Fredricks said. "He's really, over the course of the past three years, turned into a pitcher rather than a thrower. He's always had the arm." Fredricks said Beard could be one of the GMC's most dominant pitchers in 2007. "If you don't know him by now, he's going to really prove that he belongs on the short list of great pitchers that have ever come out of this area," the coach said. "I really, truly believe that because of his makeup and work ethic." Fredricks said Beard chose Rutgers because of head coach Fred Hill and the state university's academic programs. Fredricks said Beard ranks in the Top 20 of Spotswood's 2007 graduating class. "It fits his academic profile to go to a great university like Rutgers," Fredricks said. "He also felt really comfortable with Coach Hill and (assistant coach) Glenn Gardner. Those guys really made him feel Rutgers was the place for him."
cancel

HERE'S A LOOK AT THE POSTSEASON AWARDS FOR THIS YEAR'S CHARGERS:

PLAYER OF THE YEAR- WILL BEARD

2ND TEAM ALL AREA:
WILL BEARD