Petosa led off the sixth inning with a single through the left side of the infield for his 116th career hit, breaking the mark previously held by 2007 graduate Mike Hohman. Petosa scored on Shawn Weeks' homer as Spotswood closed the deficit to 5-3.

Petosa's clutch two-out RBI single in the seventh forged a 5-5 tie. Brian Smith belted a two-run double later in the inning for a 7-5 lead.

Spotswood used five pitchers including Jamie Cullen, who earned his first varsity win, and closer Cody Pace, who recorded the save.

Losing pitcher Mike Zinno struck out seven and went 3-for-3 at the plate. 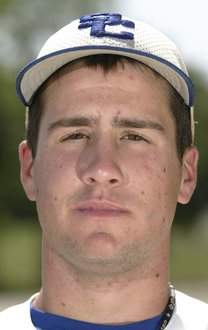 Spotswood High School baseball coach Glenn Fredricks described last season's 14-9 record as uncharacteristic. So just exactly what is the norm for the Chargers? "Until last year," said Fredricks, "we won the division title five seasons in a row. Anything less, and we've fallen short of our first goal.  The GMC Tournament is goal 2, and ending the season with a win in Toms River is always the ultimate goal each year."

Let's put this all in perspective. Go back two years ago when the Chargers finished what can only be described as a magical season. They finished 26-4 and completed what Fredricks labels the "Superfecta." Spotswood won the Blue Division, the Greater Middlesex Conference Tournament, the Central Jersey Group II sectional and the State Group II title. Over the last four years, the team has established a 77-27 record. Once the lineup is settled, look for Spotswood to resume its winning ways and challenge once again for the GMC Blue Division "We still have five guys on this year's team who were integral parts of that championship squad," said Fredricks, in his fifth season as head coach. "We have excellent leadership to go along with some new faces (four freshmen) who we think can have an impact on what we do. We're still determining where everybody will play and the rookies give us tremendous flexibility."

Two players, in fact, are almost certain to continue playing baseball once their Spotswood careers are over. Joe Petosa, a senior who mans the centerfield position, has already received a full ride to Felician College. Still, Fredricks believes Petosa is one of the most underrated players in the GMC. "Joe's managed 113 hits over his first 3 years and plays his outfield position well," he said.

Another big year should come from junior Cody Pace, who is already getting attention from Division I colleges. An excellent fielding shortstop, Pace was effective at the plate, banging out 30 hits including 15 for extra bases and six home runs. His .792 slugging percentage was also among the best in the GMC.  Add to those qualities a strong pitching arm and you have a complete player. "I couldn't ask for a better player to have on my team," said Fredricks. "Cody's a quality student and outstanding player. We expect a lot from him this year."

The same could be said about the rest of the team. With just over a week before the regular season opener, Fredricks will position various players at different spots to determine who plays. His decisions will be based on who pitches. Jamie Cullen is likely headed to second base but he, too, will contribute on the mound. The catching features a nice 2-platoon with either sophomore Shawn Weeks or senior Nick Underwood calling pitches. Bryan Smith, another senior, is slated to be at first base. The outfield is set in center with Petosa, and will be flanked by senior Vinny Vizzi, and juniors Mike Liming or John Relay depending on the matchup.

While Pace and Cullen will see pitching duty, the ace of the staff is Jon Martin. A senior, Martin pitched in big games last season including a season-closing victory over Immaculata, which was ranked fourth in the state. "That was the kind of victory that can give a boost to our confidence coming into this season," said Fredricks. "Jon will be at the top of the rotation." Jeff Coy and Ken Langfeld are two others who are likely to see mound action as the team moves through the season.   Finally, don't be surprised if freshmen make their presence felt. The pitchers are Anthony Berg, a righty, and Chris Stout, a lefty, have been so impressive when given the opportunity to pitch so that Fredricks feels the pair have earned roster spots on the varsity club.

Dean Vitale and Matt Mangarella (also 9th graders) will see action although where they play hasn't been determined. "I didn't know what to expect coming in with the freshmen," said Fredricks, "but they have performed well in scrimmages. It remains to be seen what happens when the real games begin but they will all see time."

As for the upcoming season, Fredricks admits there are question marks, which have to be answered. But he is optimistic. "All the kids have put in a lot of work during the off-season, including playing in multiple summer leagues, and throughout the fall and winter," he said. "That's going to pay off."

Brand new for 2009, the Spotswood High School Charger baseball team moved its' annual clothing fundraiser onto the internet!  It's at Finish-1st.com

- Order your apparel via Credit Card

**IMPORTANT NOTE: THIS STORE WILL RE-OPEN ON MONDAY, MARCH 23RD AND CLOSE ON SUNDAY, MARCH 29TH .  ORDERS WILL BE PROCESSED FOR DELIVERY WITHIN 2-3 WEEKS**

The Spotswood Chargers store will be open MONDAY!

After giving up a leadoff walk in the fifth, Charlie Law handed the ball over to reliever Willie Beard (Spotswood, N.J.), who finished the frame with a fly out and a pair of strikeouts.Old Dominion went to its bullpen in the eighth, replacing starter Robbie Watkins with Kyle Hald. Lang drew a leadoff walk, was sacrificed over to second and moved to third on a Dan Betteridge (Sewell, N.J.) single, but the Scarlet Knight was tagged out at the plate while trying to score on a ground ball.

The one run lead would hold up though as Willie Beard retired the Monarchs in order in the eighth and handed the ball over to closer Ryan Beard (Point Pleasant, N.J.), who set down the side in order in the ninth for his second save of the weekend. Beard (1-0) earned his first collegiate victory with four innings of two-hit, shutout relief that included five strikeouts. Law struck out four in four innings with three runs allowed on six hits. He did not pitch the required amount of innings to earn the win. Watkins (0-1) was handed the loss in seven innings of work where he struck out five and allowed four runs on three hits.

Biserta completed the three-game series with six hits in 10 at-bats that included two doubles and a home run. The sophomore also walked three times and drove in five runs, while scoring three more.