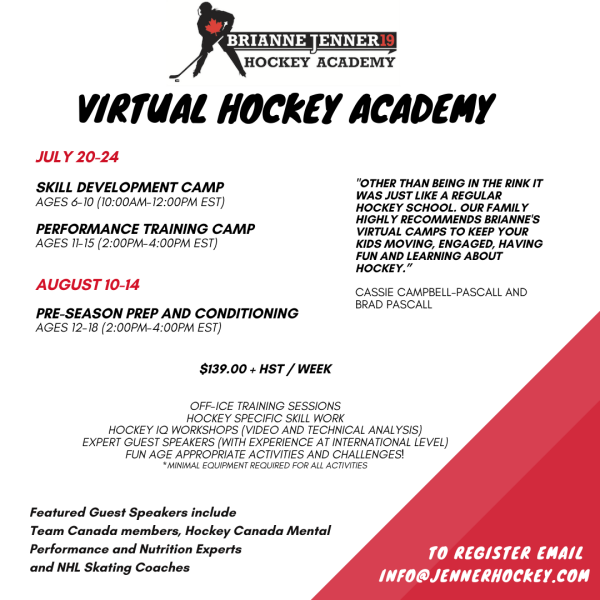 My name is Brianne Jenner, and I’m with the Canadian Olympic/National Women’s Hockey Team. During these times it’s challenging for dedicated hockey players to find a good routine and to challenge themselves in a focused manner. For that reason I’ve co-ordinated with several of my National teammates, off-ice trainers, NHL skills coaches and others to provide a great Virtual Training opportunity that I think will be of interest to Timmins players and parents. I think they’ll be impressed with the quality of presenters and the impact of the program. Our first Camp in June was tremendously well received, and as a result I’ve added two more sessions. These sessions will take place the weeks of July 20-24 and August 10-14. Each Camp is offered Mon-Fri for 2 hours each day, by age grouping, and players can register for one or both.

I will be joined by Toronto Maple Leafs Skating and Mobility Coach Randi Milani, Olympian and Strength and Conditioning Coach Ryan Sommer, Hockey Canada Mental Performance Coach Sommer Christie, Nutritional expert Emily Fulton and other Olympic teammates in a great week of activity. Workouts include age appropriate off-ice exercises, a combination of aerobic/anaerobic conditioning, strength work with a focus on single-leg stability, skating mechanics and explosive power, and also some Hockey Yoga. This is followed by skills sessions on stick-handling, shooting mechanics, cognitive and skill-based coordination drills. All players will have some great ‘take-aways’ each day, as well as challenging physical activity. Players will have the opportunity to ask questions and interact with guest speakers as well. The sessions are fun, engaging, and full of great content. And they’re challenging!

“Players in our family participated in the Brianne Jenner Virtual Hockey Academy and had a blast. The camp was very well organized and kept them engaged all week long. We highly recommend Brianne’s virtual camps to keep players moving, engaged, having fun and learning about hockey.”

There are two ways to be involved;

Individual registrations (as per the attached registration form), or
Team or Organizational registration. Several teams/organizations have taken this approach to provide weekly or twice-weekly session for players through the latter half of the summer or into the early fall. In this case sessions can be further tailored to your requirements. If this is your preference please contact me to discuss the cost, the programming and the timing of the sessions. The timing of presentations can align with the scheduled Camps or be arranged at preferred times for your team. (such as weekends or early evenings anytime between mid-July and mid-September).

Interested players can simply fill out the registration form attached here and scan this to me as per the instructions, or if interested as a team I look forward to hearing from you at info@jennerhockey.com.

Thank you, I look forward to working alongside your players!