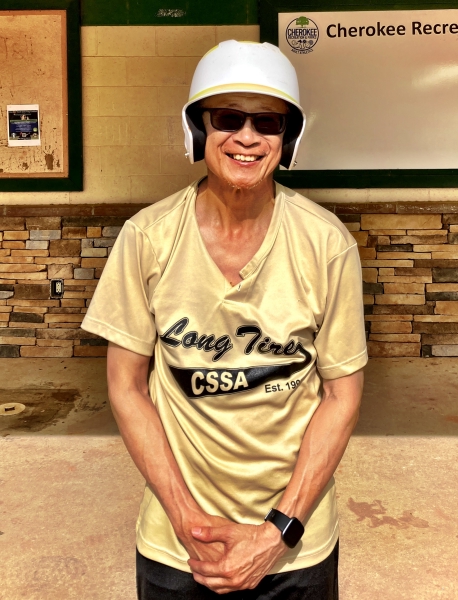 Many players and those associated with the CSSA bring new members into the organization, often friends and family, but sometimes even strangers they meet throughout their daily lives. Dewey Hom acts more like an ambassador of the CSSA. He has held practically every significant post in the group, and has done so not only because of the satisfaction he receives from playing softball, but due to the multitude of players he’s seen significantly improve their lives because of their association with their peers on and off the field.
Beep! Beep! Virtually everyone in the league knows Dewey. He’s the slender guy who always wears that white helmet with yellow bolts and his legs churn like a determined road runner. He just received his third Most Valuable Player award, this time a co-MVP for his Spring season performance with Long Tire in the Legends Gold Seniors League. In his thirteen years in CSSA, he’s won the Arnold Fowler Award (2013), the Spirit Award (2017), the Lowell Lawson Award (2020), along with multiple batting and home run titles.
It’s his speed that gets him noticed and led to his proudest moments in sports. Surprisingly, those memories are not in the CSSA, or even softball. Board members of the CSSA encouraged him to compete in the Senior Olympics track competitions, where Dewey discovered his true gift. So much so, that in 2019 in Lynchburg, VA, he earned gold medals in the 60-64 age group for finishing first in the Long Jump and 50 Meters events.
This brings us to the reason you always see that safety cap on his head. A few years ago, he was running the bases when an outfielder’s arm released a softball rocket targeted to reach second base ahead of Dewey. The ball’s impact with the side of Dewey’s skull caused a severe concussion and almost ended his life. He has made a full recovery, but he doesn’t accept the premise that lightning never strikes the same spot twice. He credits his faith with an assist that he survived that incident, and won’t ignore a simple precaution such as wearing a helmet.
This senior softballer appreciates that his wife of twenty-five years, Deborah, enabled him to pursue softball and track while she maintained a strong home front for their three children. He has always been active in his church, and understands his beliefs and related lifestyle have allowed him and his family to enjoy their lives to the utmost.
He is most appreciative of the CSSA’s existence, and pleads for more players to step up to volunteer, even in the smallest way. As in most all-volunteer organizations, a remarkable few who can always use more help do most of the work.
So, when you see this sprinting player at the rover position, perhaps spend another moment thinking if your life has any time to pitch in and support the CSSA. Then, remember what Dewey often says, “Anything can happen in ol’ men’s softball,” and have fun.