Posted by Dave Rea at Feb 8, 2012 4:00PM PST ( 0 Comments )
more editing options
The 2011 Jets Varsity lost alot of players to the Junior High team after their defeated 2010 Championship Season. The 2011 Season saw the Jets get their 6th playoff appearance and and 3rd in a row. They didn't fair as well this season and were eliminated in the semi finals. This was the 10th year for Head Coach Steve Watkins He and his assistants Art Clark and Dan Kohler coached the team to another fine season.

The JV Squad went 9-0 in League play and made the Championship for the third time, 2nd in a row. They came up short again as the Brunswick Jets prevailed 12-0. The squad was coached by Head Coach Dave Walker, who moved up from Pee Wee, and Assistants Mark Crooks, Carmen Monaco and Andrew Nigh.

The Pee Wee Squad was under the direction of Head Coach Ryan Sweeney who moved up from the Flag Squad. He and Assistants Scott Marcum, Gary Merker, and Kirk Vozar had a few ups and downs, but did have a successful season at that level. This division keeps score but does not award a Championship. They receive instruction on tackle football get ready to move up to the JV Division after 2 seasons.

The Jets Flag Squad is made up of 5 and 6 year olds. They get an introduction to football and ease into playing tackle when they move to the Pee Wee Division at age 7. The Flag team was coached by Head Coach Scott Marcum and Assistant Mike Augustine.

The Jets had great support and fund raising from their Team Moms. They were led by Head Team Mom Audrey Calame from the JV Squad and Kristen Nemes (Varsity), Heidi Sweeney (Pee Wee) and Jessica Marcum (Flag).

Posted by Dave Rea at Feb 8, 2012 4:00PM PST ( 0 Comments )
more editing options
The 2011 season of Jaguar football saw the Varsity make the playoffs for the 11th time and their 7th appearance in the Championship game. They lost to the Brunswick Browns in that game 30-16 to finish the season at 7-1. They were under the guidance of 4th year Head Coach Paul Fowler and Assistants Mike Arena and Eric Keller.

The JV Squad made it to the playoffs for the 3rd time going 7-3 on the season. The Jags JV were coached by 1st year Head Coach Kevin Capela and Assistants Cleatus Varney, Dennis Galdun and Mickey Ballantyne.

The Jags Pee Wee Squad got their 4th Season under their belt and had a good year under Head Coach Jon Stahl and Assistants Jason Mamrak, Dave Chaney and Bob Chegan.

The Jags Flag Squad is made up of 5 and 6 year olds. They get an introduction to football and ease into playing tackle when they move to the Pee Wee Division at age 7. The Flag team was coached by Head Coach Paul Schnepp and Assistant Mike Knapp.

Posted by Dave Rea at Nov 4, 2011 5:00PM PDT ( 0 Comments )
more editing options
Congratulations to former Jets' player Tyler Carrow for being named the 2011 Golden Buck award winner on Thursday night. He is the 34th recepient of the award first handed out in 1978. BYFA players have won 6 of the last 9 awards handed out beginning with Dan Cereshko (Jags) in 2003. Rob Crumpler (Jags) got it in 2004, Josh Varney (Jets) in 2006, Kelton Keller (Jags) in 2009 and last year it went to Zach Maxworthy (Buccaneers). The Iron Antler award went to Mike Winans former Buccaneer. The Most Improved player went to Anthony Kisiday, former Jaguar, and the Most Valuable Player Award went to Billy Doerge. We are proud of all of you on your football careers and your awards!
cancel

Here are the rest of the former BYFA players on the roster this season:

Posted by Dave Rea at Jul 26, 2011 5:00PM PDT ( 0 Comments )
more editing options
A former BYFA Player is headed off to play Division II Football this fall for the Tiffin Dragons. Buckeye WR Carlton Watkins will play at Tiffin in the fall of 2010. He played 4 seasons with the Buccaneers from 2001 through 2004. He is a 2010 Buckeye graduate of Buckeye. Congratulations to Carlton and we wish him Good Luck in his college career. 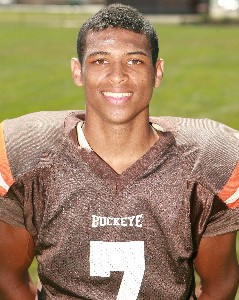