Prepare For Your Player’s Last Game

I attended a youth baseball clinic many years back when my son was about 9 and was struck by one statement by the instructor.
He said something like, ‘Every player finishes his career sometime…
PREPARE YOURSELF FOR YOUR SON’S LAST GAME!’... You never know when it will be!

Two seasons ago when my son was a High School senior player, my mentor, a 50-year baseball man with three World Series rings (and a son of his own) said to me ‘You’re going to notice a big hole when Joseph goes off to play college ball!’

Well it happened. There’s no more skipping work to catch a game at the local High School or short jaunts to the next county, no more going to the youth parks nearby and no more tournaments either!

Another phase of our family life has kicked in and at times the silence is deafening.
But at least he is still playing, right?
Well… it also told me (and my wife too) that this also will be over… and all too soon!

The Dream Lives
Every youth player dreams of playing in the Big Leagues, me included. It’s a great dream and should be nurtured. But note that I also wanted to be a cowboy too. There are probably more cowboys today than there are Major League players, so always have a back up plan!

A child’s dreams need your guidance, which is also our job. Yes, it is different today. 155 channels, two video-game systems, cell phones, IM’s, text messaging and nobody has only one TV in the house.


The bottom line is just to know and understand that baseball is just another great life-chapter. It’s a time to savor, so take lots of pictures, create & collect memories and friends, minimize the arguments & pressures and give the one thing that is most important to your own “favorite player” as well as your entire team…

Give your time & guidance!
A. The more seasons they play, the greater the chance that they will comprehend the value of teamwork, hard work, competition and how to fit in socially. These are life lessons that are worth all the time & effort they put in!

B. If baseball isn’t fun… kids will find something else to do.
Players need entertaining and engaging ways to stay interested.
Combine your time along with fun & interesting baseball training aids and maybe you can postpone your favorite player’s last game!

Some miscellaneous thoughts on the subject:

1. If a lack of fun is the biggest reason for players leaving the sport…..interested, creative adults should be able to “salvage“ some players beforehand!
2. Injuries of early overuse or poor mechanics halt many High School age players!
3. The player doing well tends to have the most fun. Parents & coaches can help players obtain superior results!
4. Good grades are key as banking on a baseball scholarship isn’t a great plan. Division I college baseball offers a maximum of 11.7 scholarships spread over 30+ players. Most players get partial rides!
5. Learn about the college recruiting processwhen your players are in 10th grade.
6. Be there when they fail. The mental & failure part of this game drives many players away. 7. Never get in a player’s face, especially in public. Kids are no match for the angry adult. Words can never be taken back. Angry reactions can break hearts, spirits and even careers. 8. Read the book “Why Johnny Hates Sports.”

Why Bother?
A study conducted by Michigan State University in 1993 found that the top 10 reasons why boys participated in non-school sports programs were:

1. To have fun
2. To do something they were good at
3. To improve their skills
4. The excitement of competition
5. To stay in shape.
6. The challenge of competition
7. To get exercise
8. To learn new skills
9. To play as part of a team
10. To go to a higher level of competition

Finally
Have you seen the NCAA TV ad that says most all NCAA athletes will go pro in something other than sports…. It’s true! It’s also true that most High School ballplayers will NOT be playing College ball…for many reasons.
ENJOY THE PRESENT… WITH AN EYE ON THE FUTURE!

Have fun, and keep ‘em close…It all goes away… quick! 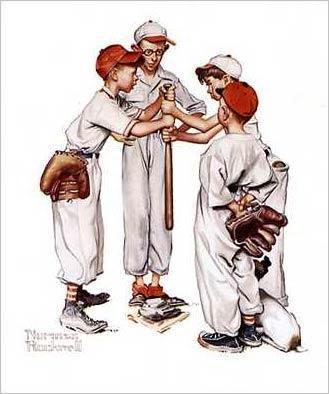