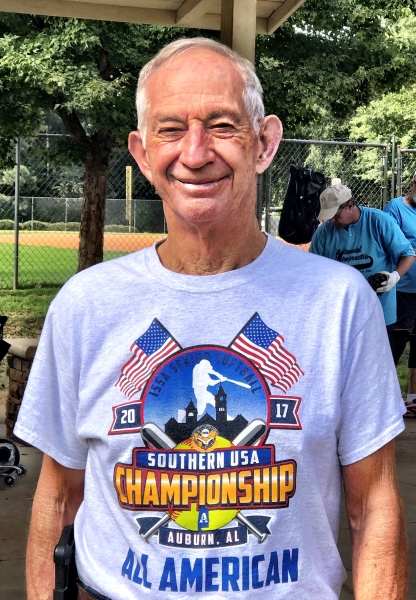 When one thinks of the recent preeminent players in the CSSA, Tom Ballard is on everyone’s list. After sixteen years in the league, including time in the American League, the Masters, and Legends Gold, he’s earned praise from his teammates and foes alike.
Perhaps it was his excellence in the outfield and consistent hitting in twelve years of tournament play as he traveled across the United States. He topped that chapter of his softball history as a member of the team which won the National Championship in the 65+ bracket in 2015, a memory he considers one of his greatest achievements.
But Tom’s performance shined brightest as a mid-fielder, where he had the most fun. He became known for his over-the-shoulder catches of those pesky pop-ups. In that position, his rifle-like arm could accurately hit its target at any base, including home plate.
When asked what he enjoyed most in his career, his immediate reply was the friends he made on the field. He also stressed he could have done none of this without the staunch support of Debbie, his wife of over forty years. If Tom was on the field, she was in the stands cheering him on.
But as outstanding as Tom is a softball player, it’s not his statistics or victories that make him stand out. Tom is most beloved for his willingness to help other players improve. He possesses a rare ability to a spot a hitch in a player’s swing and suggest a correction. It could be his stance, or the grip, the angle he holds his bat, or countless other fine points which transform a batter into a hitter.
And Tom provided these pointers while still respecting the individual’s choice and weaknesses. After all, this is senior softball.
At a recent practice, a seventy-something rookie was frustrating himself with his first attempts at swinging a bat in nearly forty years. Some on the field grumbled, only because it appeared the new guy might take another fifteen minutes before he hit five balls into play. Tom observed from the dugout then approached the man and led him into foul territory, where the unofficial coach set a ball upon a tee. He asked the man to calm and focus, then do his best to make contact. The man did. Three easy swings, three line drives. Tom said, “You can hit. You just need to get your timing down, fix your stance, hold your bat like you’re hitting a softball and not a baseball, a few other things, and practice. Above all, don’t give up.”
That incident is classic Tom Ballard, just helping his friends on the field.