Village Vikings Win the Season Opener in a Thriller! 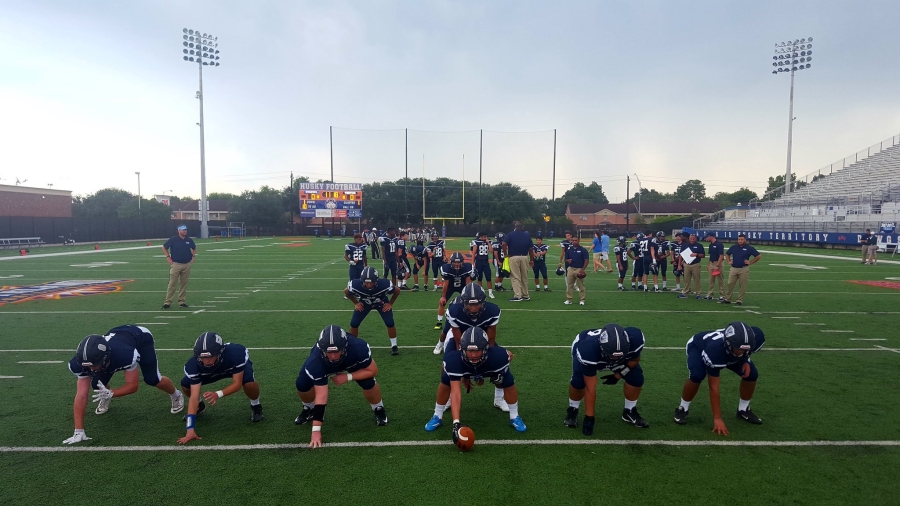 On Thursday, August 25th, the Varsity Football team had our season opener at HBU Stadium against Legacy Prep. After experiencing a slight delay due to lightning in the area, the game was officially underway at 5:00PM. The Vikings won the coin toss and chose to receive. The first half saw little ball movement from either team. Both teams tried to establish their run games early and often, but it was the defensive side of the ball that made plays and big tackles. The Vikings defense was highlighted by the twin linebackers, Jeremy and Jon S. The twins showed great range from sideline to sideline, pursuing the ball and making tackles for losses. The Legacy passing attack was non existent. Max P was on an island all night against their physical 6’3" wide receiver. Max stuck with him stride for stride, had multiple pass breakups, and the physical Wide Receiver did not record a single catch.

The second half was more of the same. The defenses were digging in and winning the battle up front. It was a battle of field position, which is a battle the Vikings lost in the first half. After recording a few first downs, the field position swung in the Vikings favor, and RB, Khalil M, broke off a 31 yard run. The score remained tied entering the 4th after the drive stalled. The first score of the game came at the 7:00 mark in the 4th when Legacy Prep got their ground game going. The 2 point conversion failed, but the Vikings now trailed, 6-0. The Vikings were forced to punt on their next possession, but the defense stepped up, forcing a 3 and out from Legacy. With under 3 minutes remaining in the game, the Vikings went hurry up offense, and had a few quick hitters that Robinson connected on to Viking wide receivers. After 2 connections, the Vikings called another pass play, but this time, Max P got behind the defense. Robinson let it fly and connected with Palmer on a 70 yard score! The Vikings tied it up 6-6 with a big PAT coming. Kicker, Owen M, stepped up and split the uprights giving the Vikings the lead, 7-6, with 2:45 to play in the game. It was now Legacy ball at the 25 after a touchback kickoff. Legacy then ran an out-route, but sophomore cornerback, Cade B, jumped the route and took it to the house for a pick 6! The PAT was no good, but the Vikings now had a 13-6 lead. The very next possession, history repeated itself. Legacy ran an out-route to the short side of the field and Cade B read it perfectly. He jumped the pass and returned it for another Viking touchdown! The Vikings now led 19-6!

After 3.5 quarters of scoreless action, both teams combined for 25 points in the final 7 minutes of the game. All of the Vikings 19 game points were scored in the final 2 minutes and 45 seconds of the game. More than anything else, this game showed the resiliency and consistent effort from our young Viking team. It showed that lightning can strike at any point, and to keep playing until the final whistle. The team will enjoy their win and return to practice on Monday to prepare for next Friday’s visiting opponent and sister school, Windermere Prep, from Florida. Kick off for that game is at 7:00PM on Friday, September 2nd at HBU Stadium.