A total of 33 Hamilton College student-athletes have earned a spot on the 2018 NESCAC Fall All-Academic Team.

In addition, Kane made the all-academic team and the field hockey all-conference team this fall.

Athy, a senior linebacker, was a repeat honoree on the first team while Thorbahn, a junior corner, earned first-team honors for the first time after being a second-team selection in 2016 and 2017.

Athy, A Falcon co-captain and candidate for Google Cloud Academic All-America honors, spent most of his career as a safety before shifting to linebacker midseason.  He was fifth on the team in tackles (46) and also had an interception and a forced fumble.

Athy, who played in every game for the Falcons during his fours season, finished his career with 167 tackles, six interceptions, four fumble recoveries and three forced fumbles.

Thorbahn finished the season second in the NE10 in interceptions with six, and also had a team-best 76 tackles, 1.5 tackles for losses, a fumble recovery and six pass break-ups.  He picked off a pass in five of the last six games and had double-figure tackles in three of the last five contests.

Thorbahn wil enter the 2019 season wtih 13 career interceptions, which is tied for seventh most in program history.  He's also 12 tackles away from 200 for his career.

The 6-foot-2 285-pound Boyle split time between guard and center while starting all ten games.  He cracked the starting unit in 2017, getting the nod at right guard in the final six.

Collins was the third leading kick returner in the Northeast-10, averaging 25.3 yards on 25 returns.  He had a long of 82 yards at SAint Anselm and his 633 kick return yards led the conference.

The 240-pound DAshiell II saw action in every game with four starts and totaled 36 tackles, 5.5 tackles for losses and forced fumble.

Paulino, also a 240-pounder, started six times and cambe off the bench in the team's other four games.  He finished his rookie year with 30 tackles, including two for losses.

Bentley closed out the season with three wins in it final four games for a record of 4-6.

“We’re extremely proud of our kids for what they were able to accomplish this year,” said Holliston coach Todd Kiley.

“This is a somewhat small (senior) group but they brought a lot to the table, led by Will Crowley and Scott Elliott, our two captains,” Kiley said. “Just outstanding leaders and took this team and put them on their back and we were able to do what we did this year. We had one little bump in the road against Scituate. Other than that we had a fantastic season.

“Looks good for next year,” Kiley added. “We have 14 returning starting positions. We’re excited for that as well but extremely happy for these seniors and the legacy they left.”

SCITUATE 57, HOLLISTON 34: Junior quarterback Matt Arvanitis rushed for two touchdowns and went 18-for-36 for 246 yards with two interceptions as second-seed Holliston (7-1) fell to third-seeded Scituate in the Division 5 South Semifinals.

Senior wide receiver Anthony Dzindolet caught six passes for 96 yards for the Panthers and sophomore running back Tristan Benson rushed for 81 yards and two touchdowns in the loss.

Scituate running back Will Sheskey rushed for 229 yards and three touchdowns while quarterback Aiden Sullivan threw four touchdowns and one interception in the win.

Both teams combined for 946 total yards of offense.

Holliston’s next game is TBD.

Player of the Week- Somerset Berkley

This Weeks Player of the Week-  Our oh so awesome Offensive line.  This group has led us all year and are the heart and soul of our amazing offense.  Great job tonight guys! 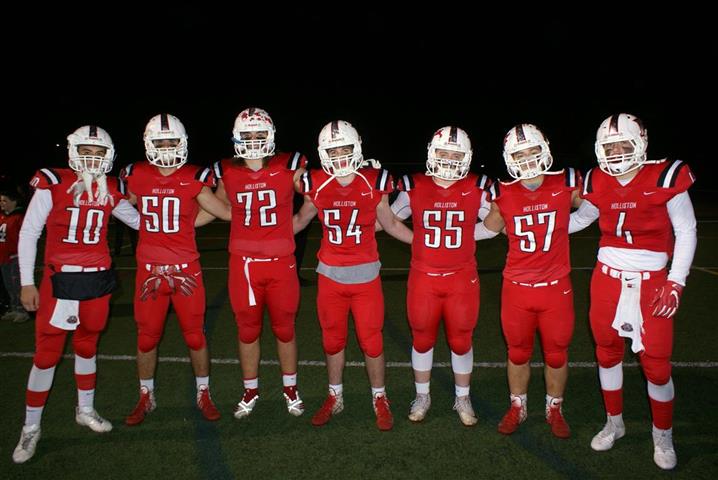