In Extra-Innings, Reading Falls to Lexington

Free baseball was played Wednesday night between the Reading Bulldogs and Lexington Bluesox. In what felt like a playoff game atmosphere, the Bluesox narrowly escaped a well-played game beating the Bulldogs 4-3 in 8 innings.

Reading struck first, putting up a run in the second inning. It started with back to back singles by Kevin Marciano and Zac Talis, who then were advanced to second and third respectively off a Corey DiLoretto sacrifice bunt. With runners in scoring position, Chris Bosco delivered a line drive single to left field scoring Marciano to take a 1-0 lead.

Alex Mandrus got his first start of the year and did not disappoint. He was dominant through four innings, giving up only 1 hit and 0 runs. Coming back out for the fifth, he gave up his first run of the game off of 2 hits. Max Mardeny came out of the bullpen to record the final out of the fifth after Mandrus’ stellar night was over allowing only 1 run on 3 hits.

Looking to take the lead in the 6th, Reading’s Mike DeDonato singled and Ryan Wolfsberg reached on an error to start the inning. After advancing to second and third with two outs, DiLoretto singled down the right field line to drive in one run, and Bosco followed that with an RBI single of his own to push the lead to 3-1.

After Lexington knotted the game up at three apiece in the bottom of the 6th, the game went extra innings after neither team scored in the 7th inning. The game came to end in the 8th inning when a Lexington pinch hitter came up with a bases loaded walk-off single to win by a score of 4-3. The winning pitcher was Blout and the losing pitcher was Mardeny.

This was a hard one to swallow for the Bulldogs, but the team looks to bounce back Friday night at Arlington before the break to get back in the win column. 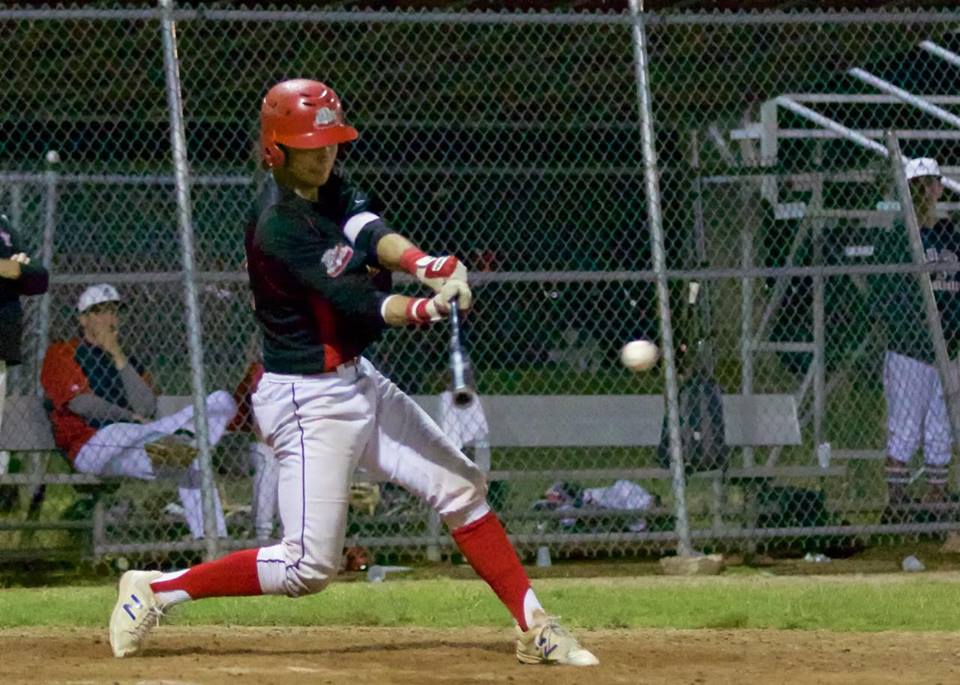 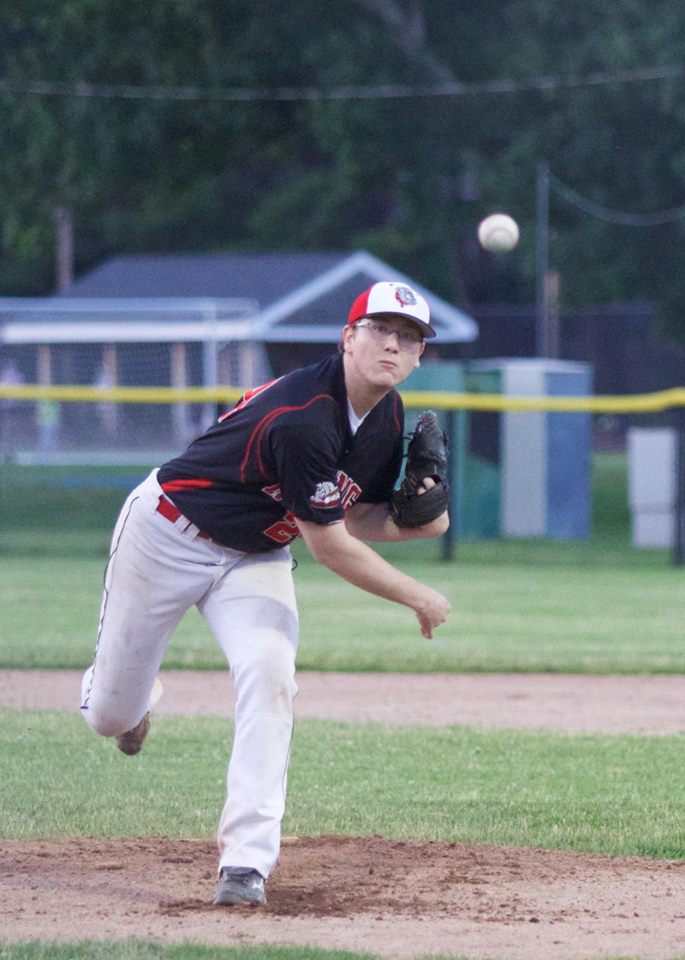 In Melrose on Monday night, the Reading Bulldogs stayed hot with a 10-3 win over the Melrose Americans. This was a back and forth battle until the Bulldogs broke open a 3-3 game in the 6th inning scoring seven runs.

In the top of the first inning, Bulldogs third baseman Ryan Wolfsberg smoked a line drive over the left field fence for a homerun to take the early 1-0 lead. After a two-run homerun for Melrose to go up 2-1, Reading quickly answered back in the 2nd inning. Chris Bosco started it with a single, later scoring from first base on a Rosario Missiti RBI triple.

Deadlocked at two apiece through 4 innings of play, Missiti stayed locked in at the dish with a leadoff double to start the 5th. After a sacrifice bunt which moved Missiti to third, Mike DeDonato stepped up and delivered a two out RBI infield single. Melrose was able punch back though in the bottom half. Behind a leadoff walk followed by a single, Melrose’s right fielder Malcolm Nachmanoff drove in one run with a double, tying the game at three.

Reading put the game out of reach for good in the 6th after they scored 7 runs. The inning started with singles from Kevin Marciano and Bosco, followed with Missiti reaching on an error to load the bases for Corey DiLoretto. DiLoretto hit an RBI single, followed immediately with another RBI single by Nick Berno. DeDonoto and Wolfsberg were able to draw back to back walks with the bases loaded bringing in another two runs. Pinch hitter, Chris Seidl, came through with a sacrifice fly to score Berno from third for the 5th run of the inning. Marciano came up for the second time in the inning punching a single through the right side scoring two more. After this seven-run attack in the 6th, the final score ended at 10-3. Berno, Marciano, Bosco, Missiti, and DiLoretto all had two hit performances for the Bulldogs.

Jack Burke had another great outing for the Bulldogs throwing 4 1/3 innings allowing only 4 hits with 4 strikeouts. However, he was responsible for the American’s three runs and received a no decision on the night after the Bulldogs put up there big inning once he was removed from the game. Max Mardeny was put in for Burke and pitched two innings of relief, while Steve Hueston came in during the 7th to record the final two outs. The winning pitcher for Reading was Max Mardeny and the losing pitcher for Melrose was the starter Chris Mitchell.

The Bulldogs will be in Lexington on Wednesday night to play the Bluesox. 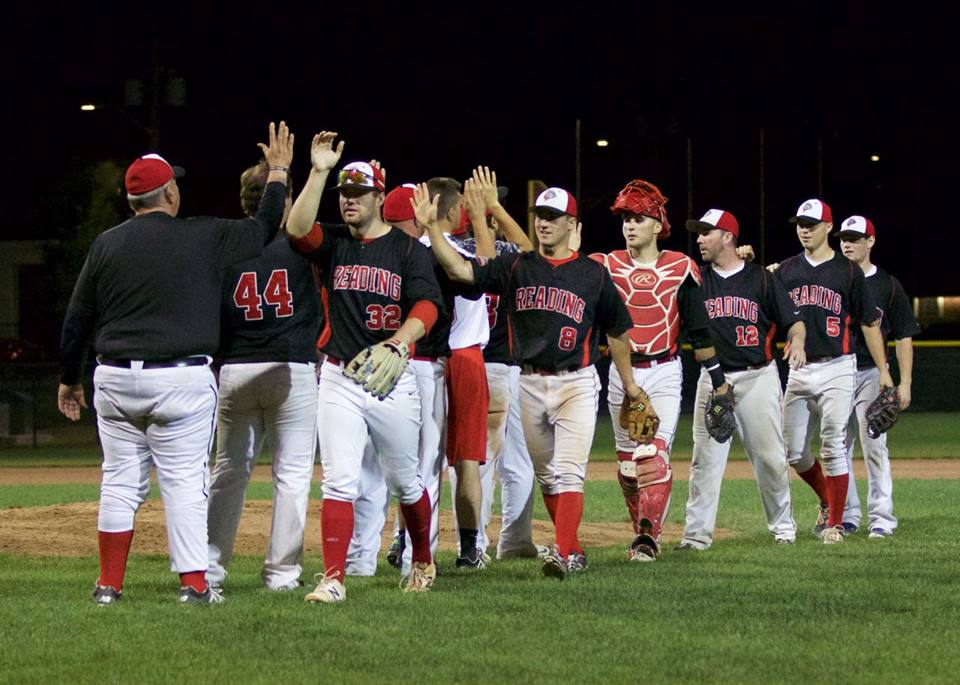 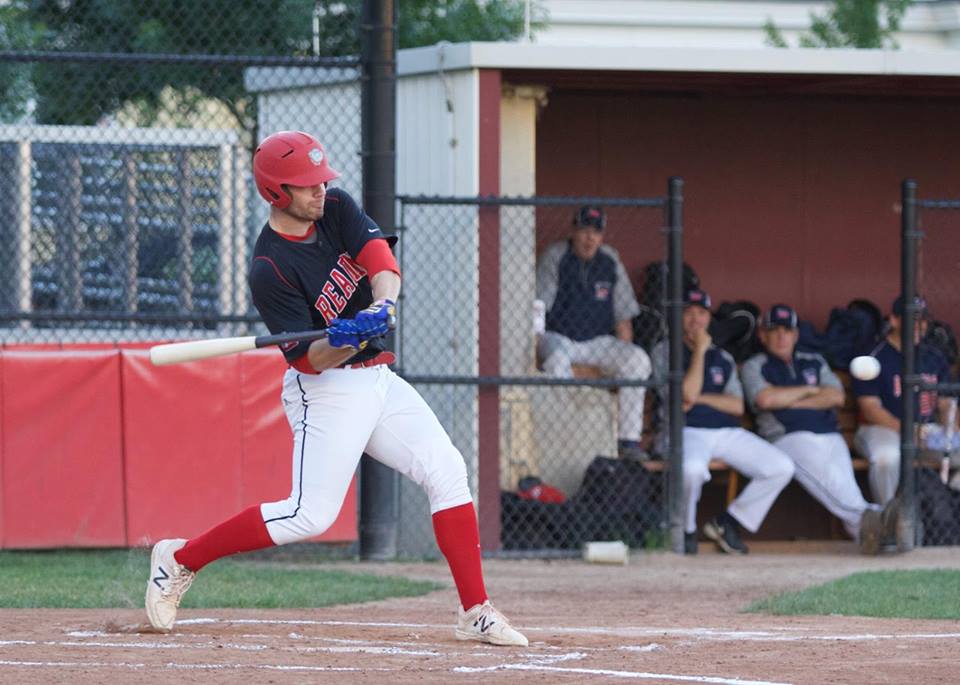 Timely Hitting and Great Pitching Get Reading the Win Over Melrose

After a rain out of Saturday’s game vs the Andre Chiefs, the Reading Bulldogs were host to the Melrose Americans on Sunday night. With great pitching and timely hitting the Bulldogs won the matchup 3-2, recording their 2nd win in a row.

On the hill for Reading was pitcher Colby Morris who was out there dealing all night. Pounding the zone with his fastball and mixing it up with his off-speed pitch in any count, Morris went 6 strong innings allowing only 4 hits and 2 runs, one of which was unearned. Throughout 6 frames Morris also tallied up 6 strikeouts while only surrendering 1 walk.

The Bulldogs offense cooled down a bit since last week’s 14 run outburst, but last night were able to come through in key spots and manufacture runs with stolen bases and situational hitting. It started in the 3rd inning when Johnny Hayes, Rosario Missiti, and Darren Hartwell all singled to load the bases. Then with two outs, Ryan Wolfsberg came up clutch with a two RBI single down the left field line to give Reading a 2-0 lead.

After Melrose fought back to tie the game in the 4th, Reading used their speed and aggressiveness to take back the lead. Having pinch hitter Nick Berno lead off the bottom of the 5th inning, he roped a single to center field to get it going. After Berno stole both second and third base still with no outs, catcher Chris Bosco came up big with a sacrifice fly to right field, allowing Berno to score the go ahead run making it 3-2 Reading.

Morris put up another 0 on the boards in the 6th and was then relieved of his duties in the 7th by closer Max Mardeny who shut the door on Melrose. Colby Morris was the winning pitcher, while Max Mardeny chalked up another save out of the bullpen. The losing pitcher for Melrose was Autilio.

The Reading Bulldogs will travel to again play the Melrose American’s on Monday night looking to win three in a row. 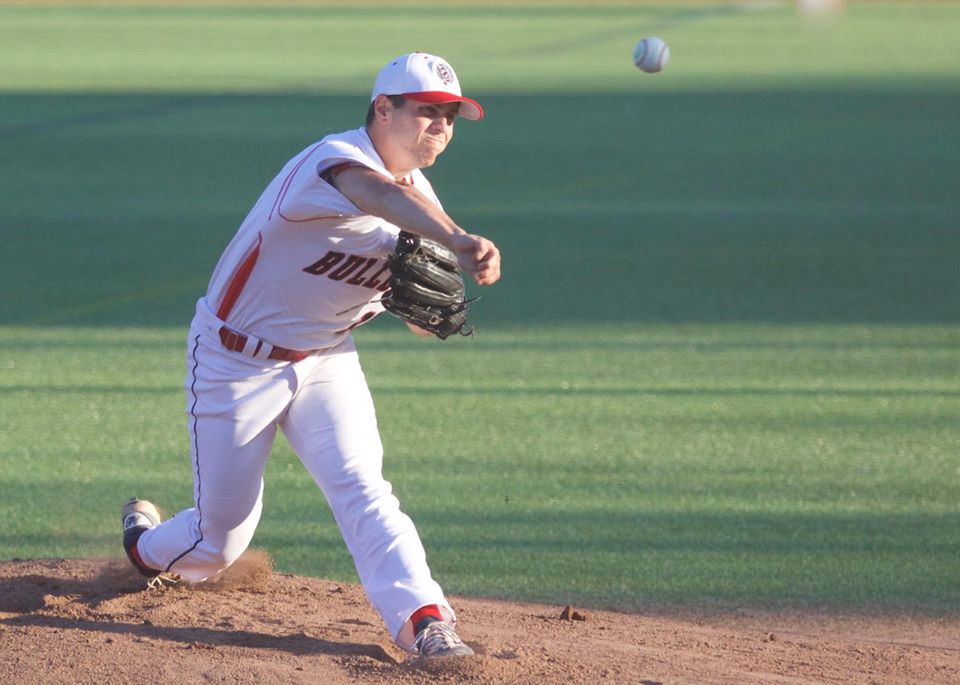 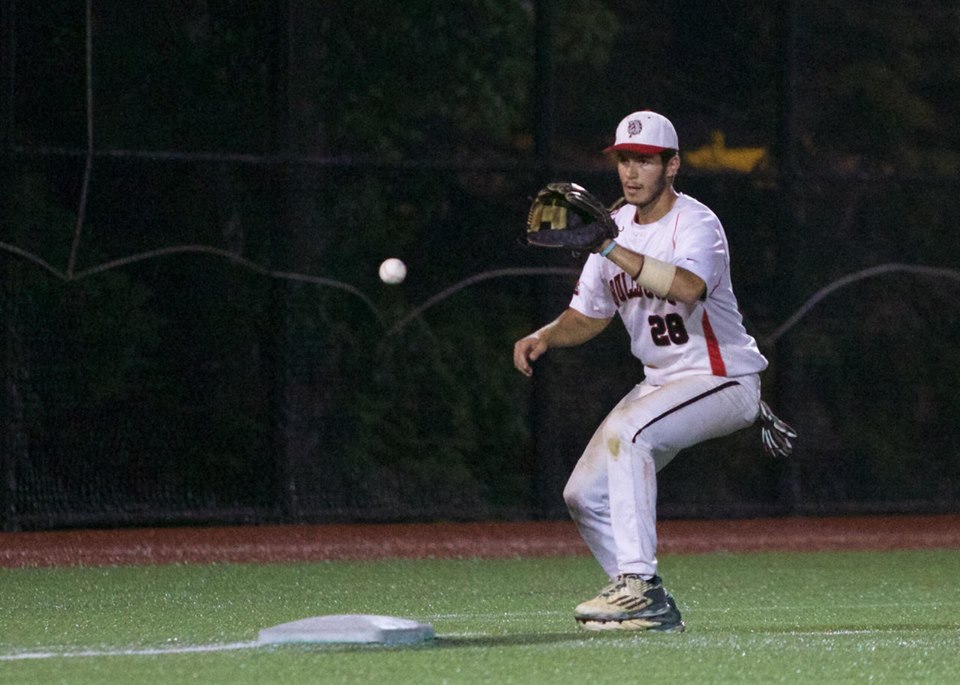 The Reading Bulldogs Offense Lead the Way in a Huge Win

In Somerville on Tuesday night the Bulldog’s bats came alive in a big way. Tallying up 13 hits, 7 of which were extra base hits, Reading beat the Somerville Royals by a score of 14-2.

The scoring started early and often for Reading. In the first inning, Mike DeDonato came up with one guy on and crushed a two-run homerun to left field, for his first homerun of the year. After scoring two in the first, the Bulldog’s started the second inning with 4 straight hits. Johnny Hayes led off with a single and the next batter, Rossario Missiti, tripled allowing Hayes to score all the way from first base. Chris Seidl and Mike Taylor then each followed up with back to back RBI doubles extending the lead to 5-0 through only two innings of play.

Somerville did manage to score one run off 3 hits in the third, but the Bulldogs answered back in a big way scoring 5 runs and batting around in the fourth inning. Following a leadoff walk and hit by pitch, Darren Hartwell hit an infield single which also allowed a run to score on an errant throw after the play was over. After back to back walks for Chris Bosco and Macyn Clifford, one of which was with the bases loaded to bring in a run, DeDonato again came up big with a bases clearing 3 RBI double. Hayes went on to record a double later in the frame, but no more runs were scored as Reading headed into the bottom half of the 4th inning up 10-1.

The Royals tacked on one more run off 3 hits to make it 10-2, but the Bulldogs followed up with three of their own. Hartwell lead off with a single followed by walks from both Bosco and Clifford, bringing DeDonato up for another time with the bases loaded. He did not disappoint as he roped an opposite field 2 RBI double, recording his 7th RBI of the game. The next batter was Steve Busby who knocked in one more run on a fielder’s choice. After 5 innings, Reading led by a score of 13-2 but would add one more off an RBI single by Chris Seidl in the 7th. The game finished with a final score of 14-2.

On the mound for the Bulldogs, starter Jack Theriault had a strong outing going 5 innings allowing just 2 runs on 7 hits with 3 strikeouts. Alex Mandrus came into relief for a scoreless 6th inning and Max Mardeny finished the game in the 7th after facing only three batters.

Reading saw key contributions from the entire lineup. Bosco and Clifford combined to reach base 5 times via the walk and each scored two times. Hartwell had 3 singles with two stolen bags and 3 runs scored. Hayes stayed hot with a 2 hit performance as a middle of the order guy. Missiti had a triple with 2 walks and an RBI. Busby came away with only one hit and an RBI, but made hard contact every time up. Seidl finished the night with 2 hits and 2 RBI’s. Out of the nine-hole Mike Taylor recorded an RBI double along with a hit by pitch he later scored on.

Arguably one of the hottest hitters in the league right now, Mike DeDonato, ended his monstrous night at the plate with 2 doubles, a homerun, a walk, and 7 RBI’s. DeDonato has been on fire lately and currently leads the Intercity Baseball League with an impressive .522 average.

The Reading Bulldogs have a 3-day break before meeting up with the Andre Chiefs in Lexington Saturday morning at 11:00am. 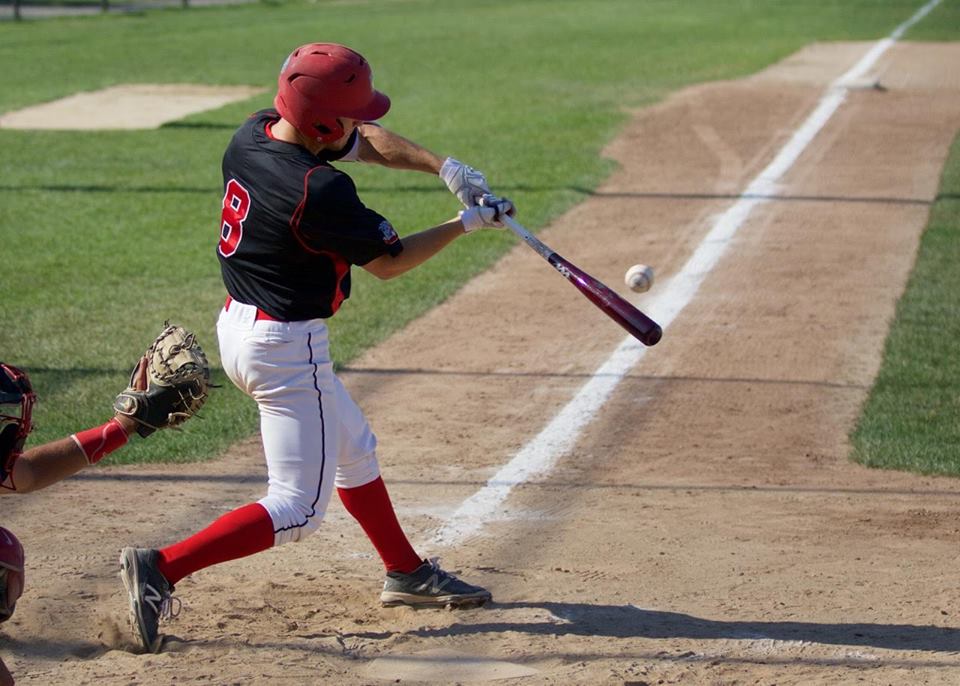 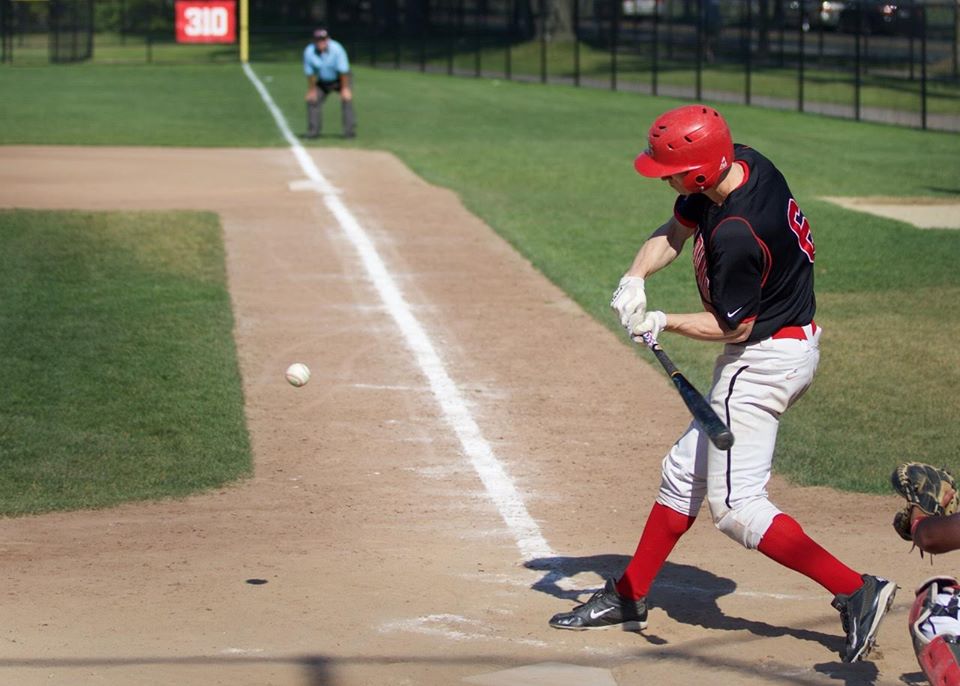 The Reading Bulldogs were at home on Monday in a matchup against the Wakefield Merchants. Wakefield’s pitcher, Steve Keskindis, received the win while allowing only 4 hits and 1 run in a complete game effort to help lead the Merchants in a 4-1 victory over the Bulldogs.

After surrendering two runs to the Merchants in the first inning, Reading battled back in the third. Catcher Chris Bosco knocked in Chris Seidl with an RBI single to pull the Bulldogs within one.

Still trailing by a run entering the fifth inning, Reading allowed Wakefield to take a 4-1 lead after Mike Sorrentino tripled home two runs. This lead was enough for Keskindis as he only faced 10 batters in the last three innings. Colby Morris took the loss for Reading.

Reading travels to Somerville to play the Royals on Tuesday night. 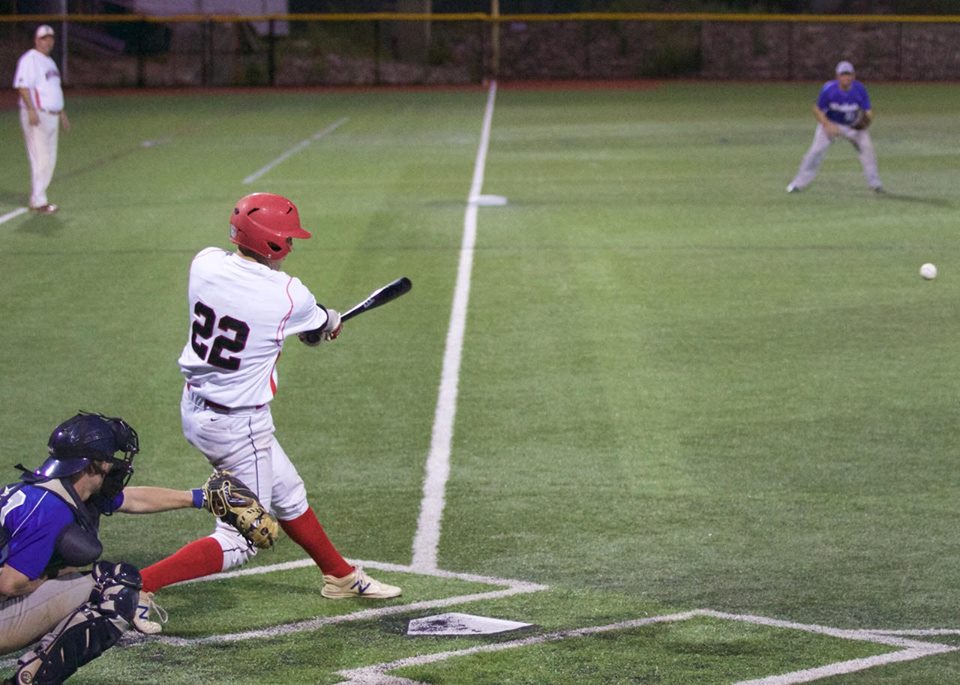 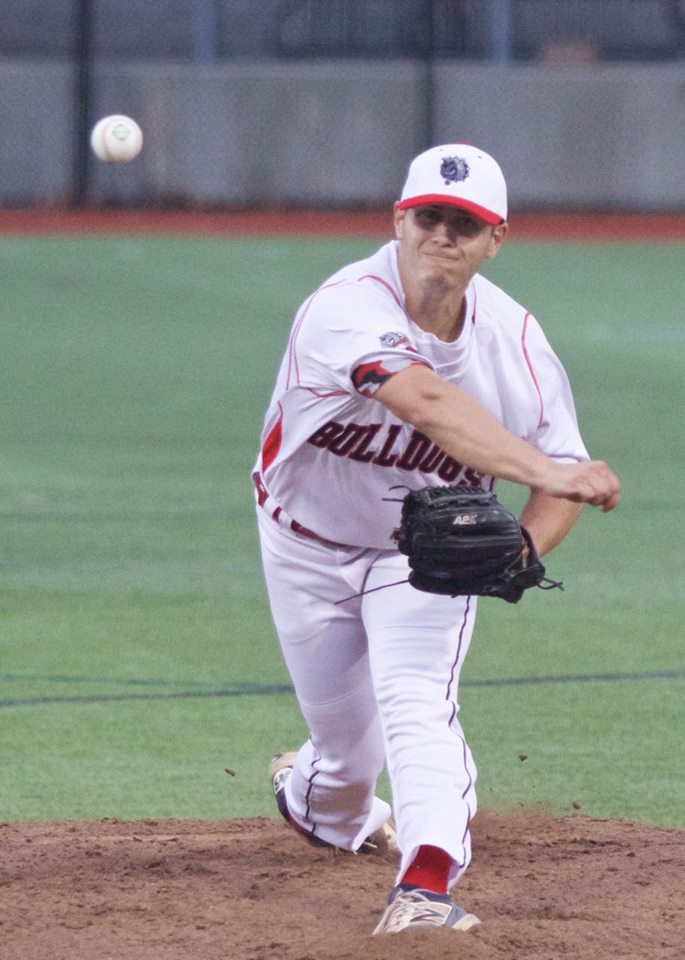