hide
hide
No announcements have been posted yet for Mountain Jacks.

Posted by Wayne Smith at May 4, 2019 5:00PM PDT ( 0 Comments )
more editing options
Welcome to the home page of the Thunder Bay Mountain Jacks Baseball Club. The Mountain Jacks are in their sixth year and will again be competing in the 15-U, Bantam division. The team is scheduled to compete in tournaments in the Mid-West United States as well as co-hosting and competing in the TBMBC Tournament held here in Thunder Bay. Dale Lane is again Head Coach of the club and will be assisted by Wayne Smith. The club has many players returning from last year's team and are joined by several players with tournament experience and many very promising rookies.

The Thunder Bay Mountain Jacks went a perfect 5-0 to win the Owatonna U-15 Tournament this past weekend in Owatonna, MN. The Jacks won their first two games on Saturday that positioned them to have to win 3 straight on Sunday to claim the Championship Crown. Strong pitching, solid defence and several home runs helped power the team to victory. Tournament stats will be posted on the Jacks site when they become available. 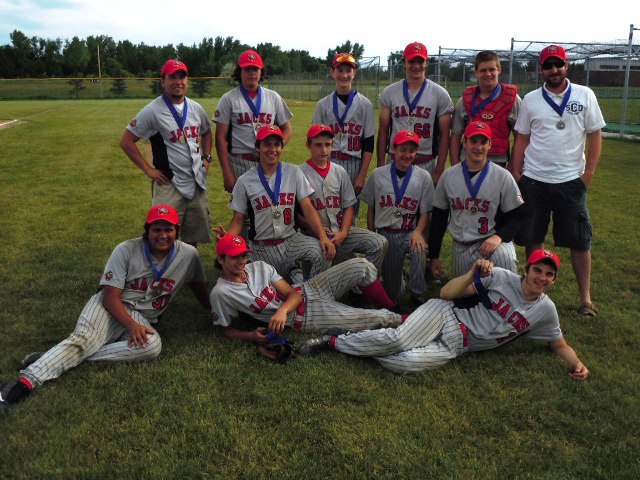 The Thunder Bay Mountain Jacks begin tournament action on May 27th when they travel to Mahtomedi, MN to compete in the 15AAA Mahtomedi Classic. The Mahtomedi Classic is a wood bat tournament and for some of the rookie Jack's players, it will be their first taste of game action using a wood bat. This year's roster features many returning players and is augmented by a strong rookie contingent, both of which are expected to form a very competitive tournament team. For updates and stats on all tourney's, check the Jacks Stats on the Jacks web page.

Game 1 saw us lose to the Brockville Bunnies 10-6 in the worst game we played by committing 7 errors and numerous other mistakes. Hayden Phirney stole 3 bases and Lucas Scocchia knocked in 2 runs.

Game 2 saw a different Jacks team show up. We eliminated the defending champions Guelph by a 20-1 score. Taylor Metzger was 3 for 4 and drove in 5 runs. Hunter Galloway and Taylor MacAskill had 3 rbi's each.

Game 3 saw us eliminate the defending Minor bantam champs from last year, Paris, by a score of 10-1. Hunter Galloway had a 2 run inside the park homer and Skye Bester hit a towering 2 run shot over the left field fence.

Game 4 on Sunday morning saw us meet the Barrie Red Sox and eliminate them by a 10-0 score. Lucas Scocchia pitched a NO-HITTER and struckout 10 to get the win. Lucas and Ryan Arabia each knocked in 3 runs and Hayden Phirbney stole another 3 bases.

In the first game we beat them 7-3 thanks to a wonderfully pitched game by Hunter Galloway. Mike Pontello drove in 3 runs and Hayden Phirbney stole another 2 bases.

That set up a 1 game winner-take-all showdown for the title. After falling behind 1-0 in the top of the 1st, the team came to life in the bottom when Johnny Peacock hit a towering GRAND SLAM homer over the left field fence to send us to a 12-2 win and a PROVINCIAL CHAMPIONSHIP. Mike Pontello was the winning pitcher and drove in 3 runs himself.

This is a testment to a GREAT group of kids who endured what can best de described as a marathon of baseball.  These boys had to play 6 games in 32 hours in 24 C heat.  Thunder Bay Mountain Baseball Club should be proud of these boys and they deserveed what that they got and earned it.  They were a great representation of the sport and the Organization that they represented in Guelph, Ontario.